Couturier counts $7.75 million against the salary cap with his contract that begins after next season and runs through 2029-30. 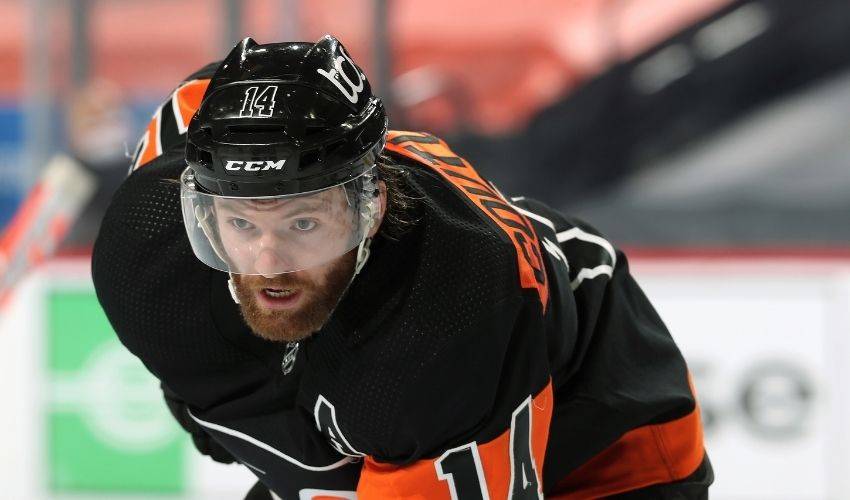 Sean Couturier plays more than any other Philadelphia forward in all situations, and now the Flyers can bank on their No. 1 center playing a lot for a long time.

Couturier signed a $62 million, eight-year extension Thursday that keeps him under contract through the 2029-2030 season at a salary cap hit of $7.75 million. That was the price in dollars and length to keep an all-around star in orange and black rather than testing free agency next summer.

“Sean’s our best hockey player right now, and he’s the key guy,” general manager Chuck Fletcher said on a video call. “If Sean had left, that would’ve changed the direction of the franchise. To lock him up was incredibly important for the short and long term.”

Now 28, Couturier will be 37 when this contract expires. That's of little concern to Fletcher in his attempt to turn the Flyers back into contenders and build a team that can compete for the franchise's first Stanley Cup championship since 1975.

Instead, this is about capitalizing on Couturier's prime, a year since he won the Selke Trophy as the NHL's best defensive forward and fresh off an almost point-a-game season with 18 goals and 23 assists in 44 games. Couturier is also a two-time 30-goal scorer.

Couturier's contract is worth the same as the deal Andrei Svechnikov agreed to with the Carolina Hurricanes earlier Thursday. It also carries a full no-movement clause for the first seven seasons, and in the eighth year Couturier must submit a list of 10 teams to which he’d agree to be traded.

The eighth pick in the 2011 draft, Couturier has 443 points in 692 regular-season games and 22 more in the Stanley Cup playoffs, while often playing through injury.

“To be part of the Flyers organization for another eight years following next year is extremely exciting,” Couturier said in a statement. “I like the way the team is built and the mix of players that we have. I’m really looking forward to it but especially this year. We’ve made a lot of changes, but it’s all positive and very exciting.”

“At the end of the last season, I vowed that we would make changes and that it was unacceptable and I think I was true to my word,” Fletcher said. “We’ve made a lot of changes. We like to think we’ve upgraded our club, and time will tell.”

Fletcher was concerned not having an extension done with Couturier could be a distraction for Philadelphia this season. He does not feel the same way about pending free agent captain Claude Giroux, whose future remains uncertain.

“At this point, our plan is to play the season out and we’ll talk at the end of the season,” Fletcher said. “Claude’s our captain, he’s a great player and I anticipate that we’ll find a way to continue that relationship going forward. But right now I think what we’ll do is we’ll just get through the season and we’ll look at the situation and see where he’s at, see where we’re at, and we’ll do what’s best for everybody.”