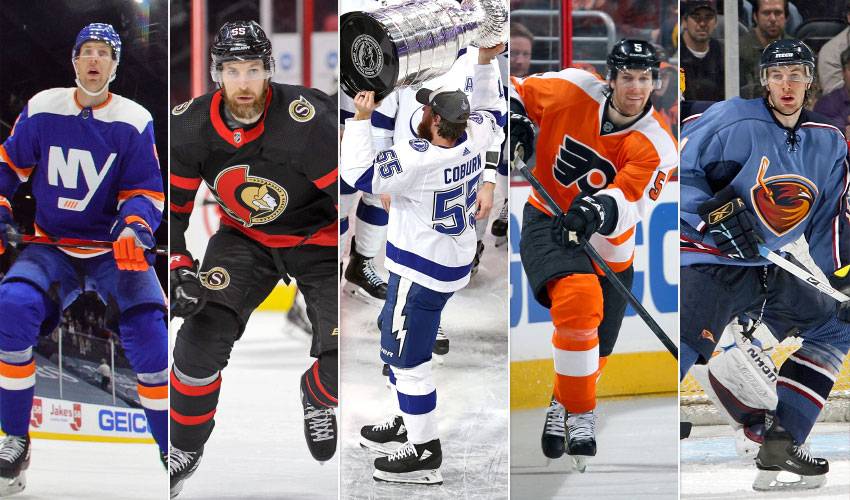 Prior to debuting in the NHL, Coburn attended Athol Murray College of Notre Dame in Wilcox, Saskatchewan. He then went on to appear in 238 games for the Portland Winter Hawks of the Western Hockey League (WHL). Capped by playing in 2001 WHL Championship Series, Coburn was awarded the Jim Piggott Memorial Trophy as the WHL Rookie of the Year (2001-02), and he was later honoured with the Doug Wickenheiser Memorial Trophy as the Humanitarian of the Year (2003-04). With the Chicago Wolves of the American Hockey League, he played in 91 regular-season games and 18 playoff games, highlighted by a 2005 trip to the Calder Cup Finals.

Coburn made his NHL debut with the Thrashers on Oct. 5, 2005, on the road against the Florida Panthers and registered one assist over nine games played with the club that season. He solidified his spot as an NHL defenceman in 2006-07, suiting up in 29 more games with the Thrashers before a trade to the Philadelphia Flyers on Feb. 24, 2007, ahead of the trade deadline. Coburn tallied his first NHL goal with the Flyers on March 4, 2007, in Pittsburgh.

In 2007-08, the defenceman set career-high totals in goals (9), assists (27) and points (36) with the Flyers, while becoming a mainstay on the club’s blue line. During his time in Philadelphia, Coburn helped the Flyers to six postseason appearances, highlighted by reaching the Eastern Conference Final (2008) and the Stanley Cup Final (2010).

After finding himself on the move to the Lightning at the trade deadline on March 2, 2015, Coburn played in 26 playoff games to help Tampa reach the 2015 Stanley Cup Final. He would spend five more seasons with the Lightning, capturing the 2020 Stanley Cup when the Bolts defeated the Dallas Stars in six games during the COVID-19 impacted NHL playoffs.

Following the Stanley Cup championship season in Tampa Bay, Coburn was traded to the Ottawa Senators on December 27, 2020. He would skate in 16 games with the Senators during the 2020-21 season before being sent to the New York Islanders on April 11, 2021, where he would finish the season and his NHL career.

Coburn also enjoyed success internationally by representing Canada. He won gold at the 2002 Hlinka Gretzky Cup, while he captained the 2003 U-18 team to a gold medal in Yaroslavl, Russia. Coburn also appeared twice in the IIHF World Junior Hockey Championship, earning silver in 2004 and capturing gold in 2005 as part of a Canadian team that is widely regarded as one of the strongest world junior teams ever assembled. He won a silver medal playing with Canada at the 2009 World Championship and also played in the tournament in 2014.

Coburn resides in Tampa, Florida, with his wife, Nadine, and their children, Rory and Blair.

“Walking into NHL buildings for the last 16 years, surrounded by hockey’s greatest players, coaches, management, trainers, officials, and fans, has been an incredible privilege. I’m very proud to have come into the league as an Atlanta Thrasher, proudly wore the orange and black as a member of the Philadelphia Flyers, won a Stanley Cup with the Tampa Bay Lightning and finished my career with the Ottawa Senators and the New York Islanders.

“Thank you to my parents, grandparents, and siblings for the sacrifices you made helping me realize my NHL dream. Thank you to my minor hockey coaches for always making the game fun, and countless others that taught me how awesome it was to be a part of a team. I would also like to send a sincere thank you to my teammates, friends and family, especially my wife, Nadine, my daughter, Rory, and my son, Blair, for their patience, support and unwavering love. I’m thankful for the amazing people I have met along the way, and I am very excited for what is to come.”

Victor Hedman had stars in his eyes upon meeting this former fellow Lightning player and Stanley Cup champion.