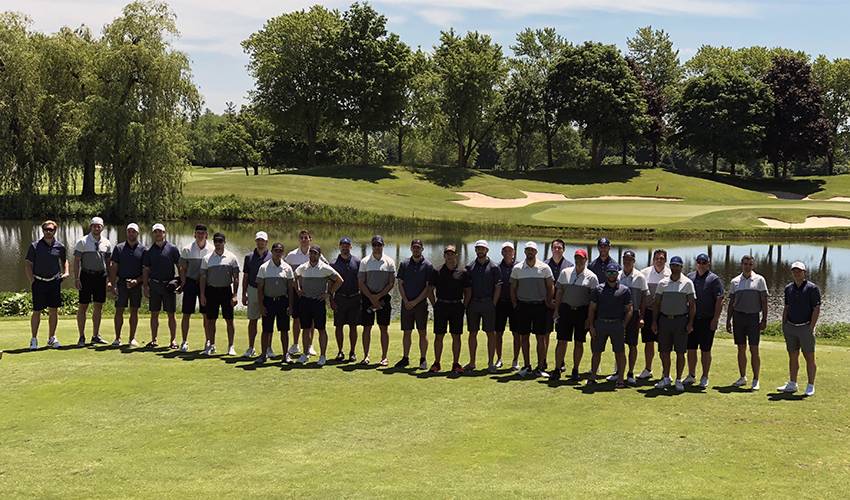 Over 25 NHLPA members, past and present, gathered to play 18 scenic holes at one of Canada’s most historic golf courses for the annual NHLPA Golf Classic.

More importantly, they came together to raise money and awareness for charities and programs that are important to each of them.

Taking place at the iconic Glen Abbey Golf Club in Oakville, Ontario, for the third consecutive year, current and former NHL players, along with corporate partners and sponsors, teed off on a picture-perfect Wednesday at the 27th annual tournament.

“Usually when you’re playing against these guys, it’s cold and there’s some bitter competition going on the ice,” said Edmonton Oilers defenceman, Darnell Nurse. “It’s a beautiful day here to enjoy the beautiful weather but when you work with the PA you’re working together and as a team. It’s always fun to have some conversation with some guys you’ve never met before or spoken with and see everyone in a different light.”

“We continue to receive great support from the players, former players and our loyal corporate sponsors,” said Devin Smith, NHLPA Golf Classic chair. “Each year, the players dedicate their time and effort to ensure this event is the success that it is, while also proudly playing a part in making a difference in their respective communities.”

As has been the case throughout the editions of the NHLPA Golf Classic, the tournament focuses on supporting many worthy charitable endeavors. Each current player raised money for a charity they personally champion.

Every player is out here at the #NHLPAGolfClassic raising money for their chosen charity. Today, @drtwofive is supporting @RightToPlayCAN! pic.twitter.com/SmdESHEJLz

At hole 10, the NHLPA hosted Kids Help Phone with a charity distance hole where yardage driven translated into $15,000 in funds raised for the organization.

The 2019 NHLPA Golf Classic directed more than $100,000 to the various players’ charities.

At the end of the day, Logan Couture took home top honours for lowest player score of the tournament by shooting -4 under par with a 68. Following the tournament, the Nobis Par 3 Challenge was won by David Miller landed seven feet away from the hole.

Impressively, Al Esterbauer from Koskie Minsky made a hole-in-one on the 157-yard hole 15.

Prior to the start of the 18 holes, players and guests gathered inside the clubhouse for a BBQ banquet and reception that was emceed by Gord Stellick. The afternoon featured speeches and a few brief remarks from former players and others.

Starting in 1993, the annual NHLPA Charity Golf Classic brings together current and former NHL players who team up with corporate sponsors to benefit chosen charities. Since its inception 27 years ago, the event has raised over $3.8 million for the designated charitable causes.