Blake Wheeler didn’t realize it’s been 10 years since he scored ‘the goal.’ But he’s had plenty of reminders through reenactments from a familiar face. 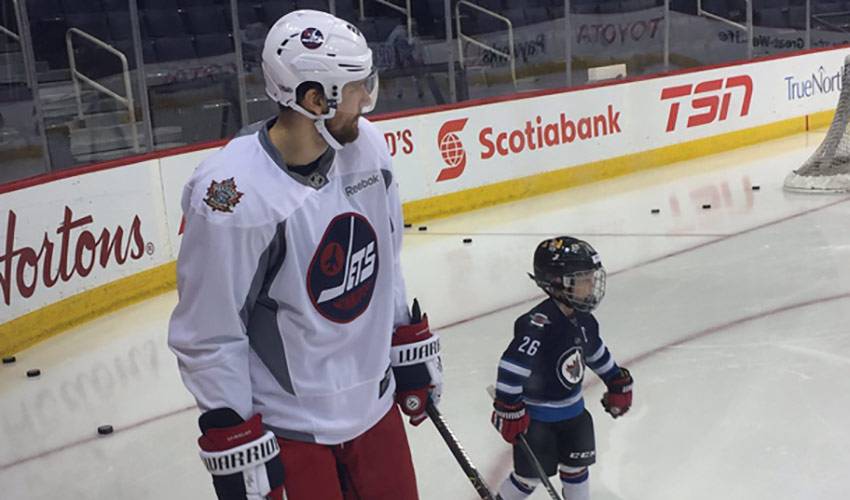 Blake Wheeler didn’t realize it’s been 10 years since he scored ‘the goal.’ But he’s had plenty of reminders through reenactments from a familiar face.

With the game deadlocked at 2-2 between rivals Minnesota and North Dakota, it was simply a question of who would step up and play hero in the WCHA Final Five title game.

What happened next was simply spectacular.

In a split-second, Wheeler engineered a full-out dive near the left circle and then swatted the puck over the North Dakota goalie’s left shoulder to deliver Minnesota a 3-2 win. The man behind the tally skated off with Final Five MVP honours.

Wheeler’s lamp-lighter is widely regarded as one of the most famous goals in U.S. collegiate hockey history, earning the No. 2 spot on the 2011 edition of Bleacher Report’s ’10 Greatest College Hockey Goals of All Time.’ It also made ESPN’s Top 10 Plays that Saturday.

“There was so much excitement because that was a goal that won a championship for the university,” said the native of Plymouth, Minnesota. “So, that’s what really made it special, to wake up the next day and knowing that it was a huge game against a big rival, a great team in North Dakota. And to know that we came out on top in that game was an amazing feeling, especially against such a tough opponent.”

You could search for it on YouTube, but we'll save you the trouble. You can see Wheeler’s dazzling extra-frame excellence below.

Thousands have viewed versions of the video, but you can count four-year-old Louie Wheeler among them.

“It’s kind of cool,” said Blake. “My son is at the age now where he can pull up things on YouTube and check things out. That’s one of his favourites.”

Louie has taken his best shot, literally, at emulating his father’s highlight-reel move.

“My son tries to do it,” said Wheeler, who recorded 74 points for the Jets in 2016-17. “Especially when he first saw it. He wanted to do the diving goal every time he was playing mini sticks in the basement.”

Just don’t expect the elder Wheeler, a veteran of 697 regular season big-league games, to attempt to duplicate the feat on NHL ice.

“It was kind of a one-off,” said Wheeler. “We’ll leave it at that. Great memories, for sure.”