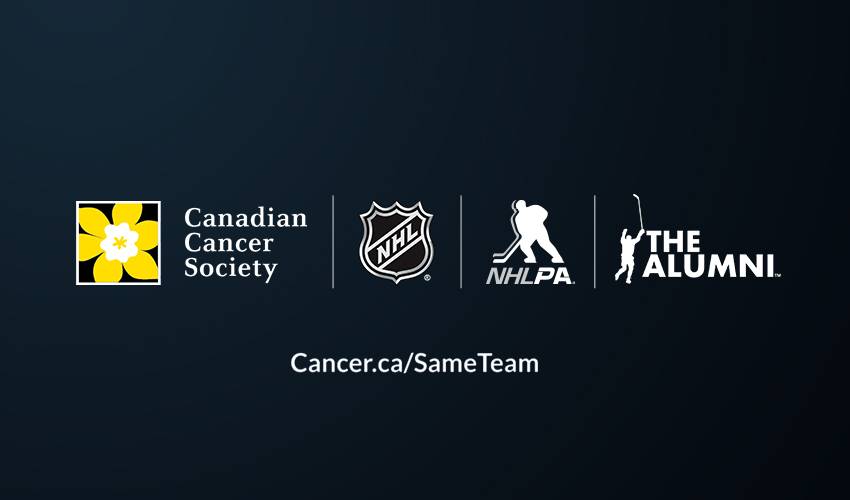 TORONTO (November 3, 2022) – The Canadian Cancer Society (CCS) announced today it is expanding its partnership with the National Hockey League (NHL®) and the National Hockey League Players’ Association (NHLPA) with the launch of Same Team – a dynamic new awareness campaign highlighting the importance of working together to save and improve the lives of people across Canada affected by all types of cancer.

The NHLPA, the NHL and CCS have an established partnership through their annual fundraising initiative, Hockey Fights CancerTM (HFC) that enables CCS’s delivery of a nationwide support program for people living with and beyond cancer, their families and caregivers. Building on the long-standing success of HFC, the three organizations, along with the NHL Alumni Association, have developed Same Team to engage a broader audience with the message that when it comes to cancer, we’re all on the same team.

“We deeply value our work with the NHL and the NHLPA. Innovative partnerships like this invite Canadians to engage with and contribute to CCS’s mission in unique ways,” says Pamela Mollica, Executive Vice-President of Marketing and Communications, Canadian Cancer Society. “The Same Team campaign celebrates our organizations’ shared commitment to the cause and reminds hockey fans that together, we can change the future of cancer forever.”

An emotional Same Team campaign debuts this week with a first-of-its-kind video featuring some of hockey’s most notable legends and current superstars. The participating players range across many eras of the sport and represent several different teams that have been affected by cancer – all sharing ice time, the team bench and a commitment to the cause. Some of the players showcased include Connor McDavid, Sidney Crosby and Auston Matthews, alongside cancer survivors Mario Lemieux, Phil Kessel and Saku Koivu. The video also includes Hockey Hall of Fame forwards Guy Lafleur, Mike Bossy and Dale Hawerchuk – all of whom passed away from cancer.

“Bringing current NHL players together on screen with some of the legends of the game for this campaign reinforces the message that we are all on the Same Team. Just as

cancer has affected players and hockey fans alike, together we share in this fight,” says Mathieu Schneider, NHLPA Special Assistant to the Executive Director.

Kim Davis, NHL Senior Executive Vice President of Social Impact, Growth Initiatives and Legislative Affairs adds, “For decades, the NHL has worked across our Clubs and alongside the Players’ Association to support members of our hockey community and those beyond who are fighting cancer. The Canadian Cancer Society is leveraging hockey’s most powerful and inspiring asset – its community of people – who time and time again come together in difficult moments and become a source of strength for one another.”

Glenn Healy, Executive Director of the NHLAA said, “The three most devastating words anyone can ever receive are ‘You Have Cancer’. We’ve seen Legends of our game and members of our hockey family fight this great battle; our work has only begun. We are stronger together and with the NHL, the NHLPA, and the Canadian Cancer Society on the Same Team, we will fight and beat this horrific disease.”

Hockey fans from across Canada are encouraged to join the #SameTeam by posting a photo of themselves wearing their favourite team’s jersey, or alongside friends and family sporting rival gear, to their social media channels using the hashtag #SameTeam and tagging @cancersociety, @NHL, @NHLPA and @NHLAlumniAssociation, as well as their friends and colleagues so that they can also show their support.

Visit cancer.ca/SameTeam for more information and for a full list of ways to get involved.