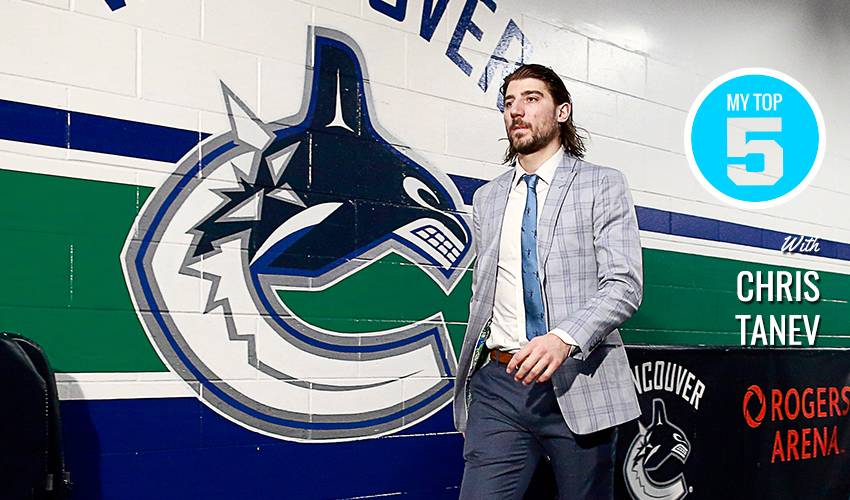 Are you ready for some football? Chris Tanev sure is. The Vancouver Canucks defenceman is hoping for a big season from his favourite NFL team, along with looking to go one better than his finish in last year’s fantasy draft.

What record does the alternate captain think his beloved Buffalo Bills will post in 2019-20? What position would he like to play if the team offered him the chance to hit the gridiron?

Strap on the helmet and cleats and find out in this week’s edition of NHLPA.com’s Top 5!

“I think the Bills are going to be around .500 this season. We’ll see. Let’s see if they can throw the ball around a little bit. The quarterback [Josh Allen] can run and they have a couple good running backs, but let’s see if they can get the passing game going.”

“I’ve been to a couple Bills games, and I’ve been to a bunch of NFL games, but I actually prefer to watch it on TV, to be honest. It’s fun going to the games and tailgating, but watching the game on TV is better. When you go to a Bills game, it’s great to see how passionate the fans are – the team has such a huge following. The fans definitely enjoy themselves and have fun.”

“Growing up, the Bills were always on TV, so that’s how I started liking them. That’s the only explanation that I know of that makes sense to me.”

“We always played football growing up, flag football or touch football with the guys. For some reason, I liked watching it a lot on TV. It’s a very fascinating game, very strategic, and I like that part of it a lot. If the Bills asked me to play, I’d go for playing safety. Maybe get an interception… that would be alright.”

“We’ve done fantasy football drafts with the team in the past, but I’m not sure if we’re going to do it this year. We have a lot of new guys, so we’ll see once we get back to Vancouver if the guys want to do it. I do fantasy football with my buddies back home. I’ve done fairly well. I came second last year… pretty good year, but lost in the final. As long as I don’t come last, I’m happy.”