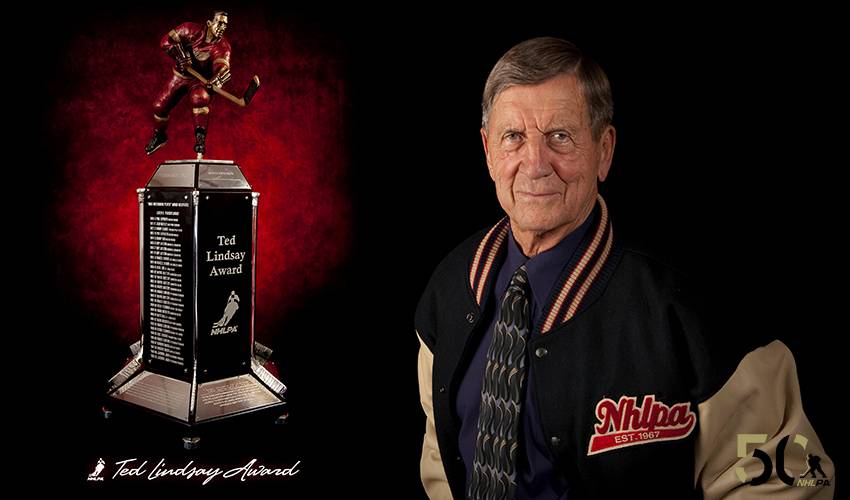 “All current and former NHL players lost a true friend with the passing of Ted Lindsay. “Terrible Ted” was one of the fiercest competitors to ever play in the NHL, and he enjoyed great success on the Detroit’s fabled “Production Line”, helping lead the Red Wings to four Stanley Cup championships. On the ice, Ted Lindsay was one of the best players to ever to put on a pair of skates.

But his greatest legacy was off the ice. A true trailblazer in seeking to improve conditions for all players, Ted was instrumental in organizing the original Players’ Association in 1957. All Players, past, current and future, are in his debt. All those who have, and will follow him into the NHL, enjoy improved rights and benefits in large part due to the efforts he made.

In recognition for Ted’s extraordinary contributions on the players’ behalf, the NHLPA proudly renamed our ‘Most Outstanding Player’ award after him in 2010. It was special that Ted and his beloved late wife Joanne were a part of that process. He appreciated the honour that was bestowed on him, and it was a pleasure having him on-hand to present his namesake award on six separate occasions. Ted deserves many accolades for his work on and off the ice in hockey, but the charitable work he has done in recent years to support autism research and educational programs through the Ted Lindsay Foundation is simply incredible and is a testament to Ted’s character. He simply never stopped giving back and helping others.

The players are much better off today thanks to Ted Lindsay. His passing leaves a significant void, and he will be greatly missed by the entire hockey world and beyond. On behalf of all current NHL players and the NHLPA’s staff, I pass along heartfelt condolences to Ted’s family and friends.”