Player of the Week | Mark Scheifele

Mark Scheifele was the league's top point-getter (5-6–11) over four games and factored on all three overtime goals for the Winnipeg Jets, who enjoyed a perfect week. 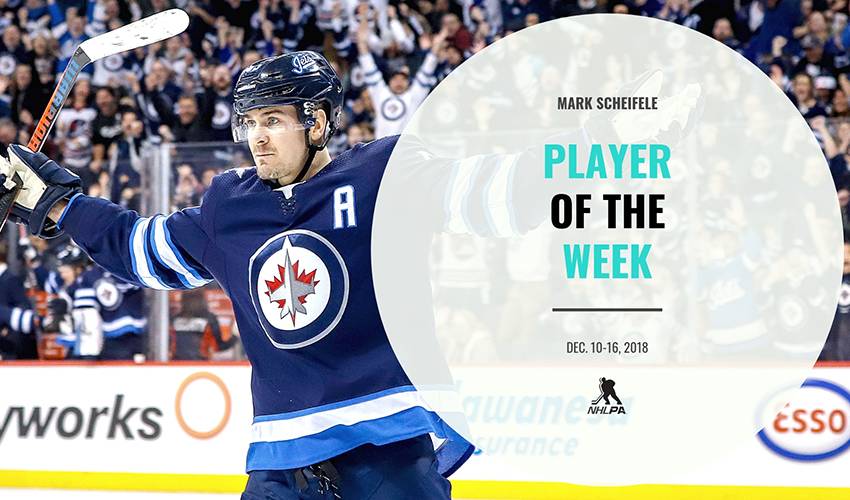 Mark Scheifele was the league's top point-getter (5-6–11) over four games and factored on all three overtime goals for the Winnipeg Jets, who enjoyed a perfect week.

His hot streak has onlookers thinking the forward could be in for a trip to Las Vegas by the season's end.

Mark Scheifele is tearing it up! 14 points in the last 5 games. Wouldn’t be surprised if he picks up multiple awards this year. #HotStreak

The Jets played host to the Chicago Blackhawks Tuesday night at Bell MTS Place, where Scheifele led game forwards with 22:40 of ice time in a 6-3 win for his team. The alternate captain opened the scoring for the home side in the first period on the power-play for his 17th goal of the season.

Scheifele later assisted on Kyle Connor's second-period power-play goal (which stood as the game-winner) to bring him to 14 points over his last nine games as he also skated away with the game's second star.

Thursday night marked the first of three games that would require overtime for the Jets. With the Edmonton Oilers in town for a game that saw a lead-change four times, the Jets eventually skated away with a 5-4 victory as Scheifele registered the first of three straight three-point nights.

With the Oilers ahead 4-3 off a power-play goal from Alex Chiasson, Scheifele scored the third period's only goal to force overtime after notching his first point of the night on a first-period goal by Nikolaj Ehlers.

Just forty-one seconds into the extra frame, Jets teammate Josh Morrissey unleashed the game-winner off a pass from Scheifele to seal Winnipeg's third consecutive win and second of the week.

"Nice to be able to get that one in the third by [Scheifele], that was a huge goal, and then to find a way to get that win was big," Morrissey told reporters postgame.

The Jets and Blackhawks met one more time over the week, this time with Winnipeg on the road at the Madhouse on Madison Friday night. Scheifele opened the scoring again with a power-play goal in the opening frame before assisting teammate Mathieu Perrault's sixth goal of the season with a stretch pass.

Though Erik Gustafsson tied it up for the Blackhawks late in the third period to force overtime, Scheifele needed just fifty seconds to cap off a three-point night as the game's first star with the game-winning goal.

With the game's first star and a four-game multipoint streak in hand, Scheifele's teammates were quick to credit his leadership on and off the ice.

"We need him to be that kind of player for us and he has been," teammate Bryan Little said. "He's delivered. It seems like he's always scoring those big goals when we need them. He's a leader in the dressing room, a leader on the ice. Can't say enough good things about him."

A buzz was in the air as the Tampa Bay Lightning rolled into Winnipeg with an eight-game winning streak Sunday night. It was another wild affair as both sides traded chances but it was the Jets who came out on top with a 5-4 overtime win spearheaded by Scheifele's third straight three-point night, including his seventh career overtime game-winning goal.

Scheifele led game forwards again with 25:24 of time on ice, trailing only teammate Dustin Byufglien by one second for the game-high as he skated away with the game's first star and his 21st goal of the season.

Scheifele leads his team with 46 points this season (21-25–46) and is just 11 goals shy of matching his career high (32) as the holiday break approaches.

The Jets can unpack for a few days with a three-game homestand up next beginning with the Los Angeles Kings in Winnipeg Tuesday for puck drop at 10:30 p.m. ET.