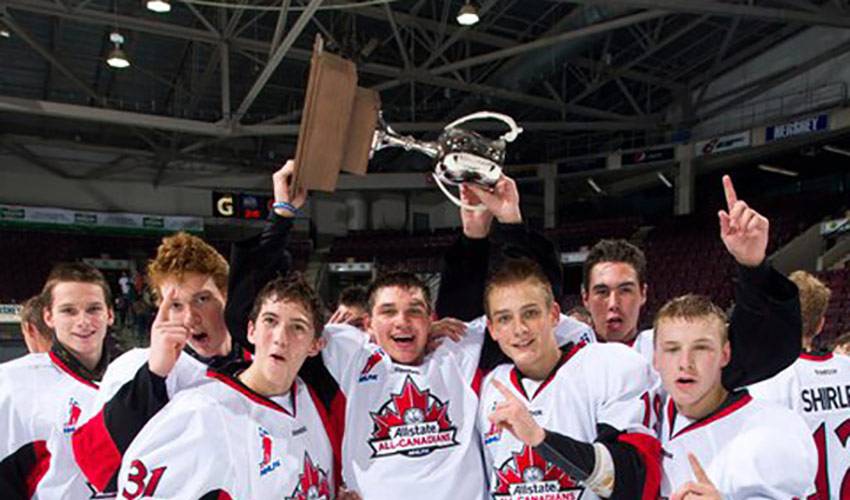 With a week of rare experiences and a host of new training and nutritional techniques in-hand, the 42 players and their families are preparing to depart Toronto and head back to their hometowns all across Canada.

To say that this week has been the highlight of these bantam-aged players' young careers would probably be an understatement. From the on-ice instruction of Gary Roberts and a significant number of current NHLPA members, to the chance to get to know and play for Luke Schenn and Jason Spezza, not to mention everything the players and their families have experienced away from the rink in metropolitan Toronto, this has undoubtedly been a memorable week here at the inaugural Allstate All-Canadians Mentorship Camp.

From the outset of the week, the players have been building relationships amongst each other, relationships that will definitely remain strong as these young players grow in both their lives and hockey careers. After speaking with the coaching staffs from both teams, the consensus around the camp is that not only did this week bring together 42 of the best bantam-aged players from across Canada, but also a collection of upstanding and well-mannered young men, something that is a testament to their communities, their parents and themselves.

So, as this first annual Allstate All-Canadians Mentorship Camp comes to a conclusion, everyone involved this week – from the players to the NHLPA staff and all those who played a role in making the event such a success – can walk away knowing that they have been a part of an extremely innovative program that will hopefully continue to grow year after year.

Thanks for following along with us here on NHLPA.com this week, and good luck to the 42 young hockey players this upcoming season.

Here's a short documentary of the week:

Day 4 of the All-Canadians Camp is a wrap and the mentorship sessions are for the most part complete for the 42 players at the Camp. What lies ahead now is one more good night sleep followed by tomorrow's Mentorship Cup.

On Day 4,Team Schenn and Team Spezza participated in another full day of skill development both on and off-the-ice, including a session on financial planning and a special guest lecture by legendary retired NHL referee, Kerry Fraser.

One of the highlights of the Camp so far has been the food provided by Nature's Emporium. After three days of spending a great deal of physical, mental and emotional energy the players showed no signs of slowing down – due in large part to the healthy meals and snacks provided. Lean proteins and healthy low-sugar carbohydrates fueled the players as they continued from one session to the next.

When asked about the importance of nutrition to these young players, Camp leader Gary Roberts put it succinctly.

“We are showing these players how to healthily eat 4000 calories a day - and what that looks like,"" Roberts said. ""We provide information on the difference between healthy carbs and other carbs that are high in sugar, which cause you to burn out quicker. Having sustained energy is key to performing at your best and we want to share that information with developing players.""

Jason Spezza and Luke Schenn continued to develop their mentorship roles with their teams on Friday with four hours of on-ice training.

Various other NHLPA members were out again on Friday. Jeff Skinner, Matt Stajan, Zac Dalpe and Brayden Schenn worked with the teams and individual players throughout the day.

The end of Friday brought mixed emotions for everyone involved. The experience for parents, players, and coaches has been rewarding and the feeling around the camp is that of a positive work environment and there were countless examples of collaboration, learning, sharing and teamwork.

At the same time, the anticipation towards Saturday's Mentorship Cup continued to build and you could see the competitive fires burn even brighter as Friday came to a close.

Only time will tell who will shine the brightest in tomorrow's game but we can be rest assured that everyone involved will play like an All-Canadian.

Stay tuned for tomorrow's recap of the game.

Day 3 of the camp was highlighted by the arrival of two NHLPA members who will be taking a leadership role over the next two days.

Jason Spezza and Luke Schenn arrived at the Hershey Centre on Thursday to meet and practice with their respective teams at the All-Canadians Mentorship Camp. After two full days of bonding both on and off the ice, Team Spezza and Team Schenn are starting to gel and the anticipation towards the Mentorship Cup is steadily mounting.

A table full of Team Spezza members who were eating lunch on Day 1 were asked what the highlight of the week would be,and Saturday's game was on the top of everyone's list. With the arrival of Coach Spezza and Coach Schenn on Thursday, the formation of both teams was complete.

After a brief team meeting that ended with a demo of NHL12 provided by NHLPA partner EA Sports, both Spezza and Schenn led their teams through an intensive on-ice practice. The players worked on variety of skills including; puck movement and handling, one-timers, dekes and hand eye-coordination drills. The goaltenders also participated in a skill development workshop led by NHLPA member Martin Biron - who covered all aspects of the position.

Other NHLPA members were on hand throughout the day further adding to the experience. 2010-11 Calder Trophy winner Jeff Skinner worked with Team Spezza during the morning session, and Colorado Avalanche forward Daniel Winnik was on hand to run drills with Team Schenn in the afternoon.

Away from the rink, on the fitness side of things, Mentorship Camp leader Gary Roberts took each team to his High Performance Centre for a training session that included instruction from Matt Nichol and Lorne Goldenberg on the latest hockey-specific exercises used by many of today's NHL stars - including Steven Stamkos, Eric Staal and Jeff Skinner. Parents were on hand to take in the session and were wowed by the advanced techniques being taught. As more than one NHLPA member mentioned during the camp, the opportunity to gain access to this level of off-ice training at such a young age is a chance of a lifetime for these minor hockey stars.

After three full days of activity, the players, coaches and parents will get a chance to close out the day with a leisure cruise around the Toronto Islands, during which they can take in the picturesque views of the downtown skyline and reminisce over the days' events.

Afitting way for the 42 youngsters to gain some perspective on what has already transpired - knowing full well that the most exciting two days of camp still lie ahead.

With the formalities of Day 1 behind the players, the Mentorship Camp officially got underway Wednesday morning.

The players were up early for the 6:45AM breakfast call at the Westin Harbour Castle Hotel in downtown Toronto. All-Canadians Mentorship Camp leader Gary Roberts was on-hand to ensure the 42 young players started their first day of Camp off right with a meal specifically designed for an elite athlete. The diverse menu included oatmeal, yogurt, berries, dried fruit, nuts, and scrambled eggs. After the hardy, but healthy breakfast, players were shuttled on a private bus to the Hershey Centre in Mississauga for the official start of the camp.

At the rink, the group was divided into two groups – each alternating between on and off ice training sessions. Off-ice workouts were led by hockey strength and conditioning experts Matt Nichol and Lorne Goldenberg and included a 1½ hour functional movement session. The session consisted of several variations of lunges and footwork – each one specific to skating strength and stability.

On the ice, the players took part in an advanced 2-hour skill session led by Gary Roberts and various NHLPA members including Rob Schremp, Steve Montador, Tim Brent, Chris Campoli, Stephen Weiss, Aaron Johnson, Steve Staios and BJ Crombeen. Once the camp attendees hit the ice, it was clear they were comfortable and excited to showcase their dazzling array of speed and skill. The coaches took the players through an advanced session that focused on many aspects of the game including defensive angles, high-speed puck control, off the rush breakouts and positioning in all zones.

In between on-ice sessions, players were given a lesson in the intangibles – with a private class led by one of Canada's most noted sports psychologists, Dr. Paul Dennis. If you are not familiar with ‘Dr. Paul' check out his videos on the All-Canadians site that cover the many mental aspects of the game – aspects that any NHL player will admit are crucial to success in hockey.

With Day 2 in the books, the players are finding their roles within the team and the chemistry among them is taking shape. The bonds are being formed between the players, parents, and coaches that make up the core of the camp and it is becoming clear that the All Canadians Mentorship Camp is turning into the special event we hoped it would be.

Stay tuned as we follow the action. In the meantime, visit the All-Canadians Facebook Page for photos from the day.

The anticipation is over, so let the camp begin.

On Tuesday afternoon, 42 of Canada's most-talented Bantam-aged hockey players arrived at the NHLPA offices in downtown Toronto for the start of a week-long experience that they won't soon forget. The inaugural Allstate All-Canadians Mentorship Camp officially kicked off at 4PM when the participants received an official tour of the NHLPA offices and custom equipment fitting by NHLPA equipment partner, Reebok Hockey.


TSN was on hand to cover the event, giving these minor hockey stars a chance to experience the national sports media first-hand. Following the events at the NHLPA offices, all 42 participants were shuttled to the Hockey Hall of Fame for a welcome reception and private tour showcasing Hockey's most sacred records, memorabilia, and trophies. For many, this was their first visit to “The Hall”, making the kick-off day of the Camp even more special.

With all this behind us, Day 1 is in the books and the camp is off to a great start. As the young players get a chance to meet and interact, the bonds of friendship and camaraderie are already being formed and will continue to grow over the course of the rest of the week – and in some cases - years to come. Day 2 is where the real work begins as the players arrive at the Hershey Centre in Mississauga to immerse themselves in the training and mentorship program that will make up the remaining four days of camp. Everything will culminate on the final day, August 6th, when players are divided into two teams to face-off head-to-head in the All-Canadians Mentorship Cup - coached by NHLPA members Luke Schenn and Jason Spezza.

For a complete photo gallery of the camp, visit our Facebook page.

Follow us on Twitter @All_Canadians and use the hashtag #AllCanadians to join in on the conversation. We're posting live updates daily.