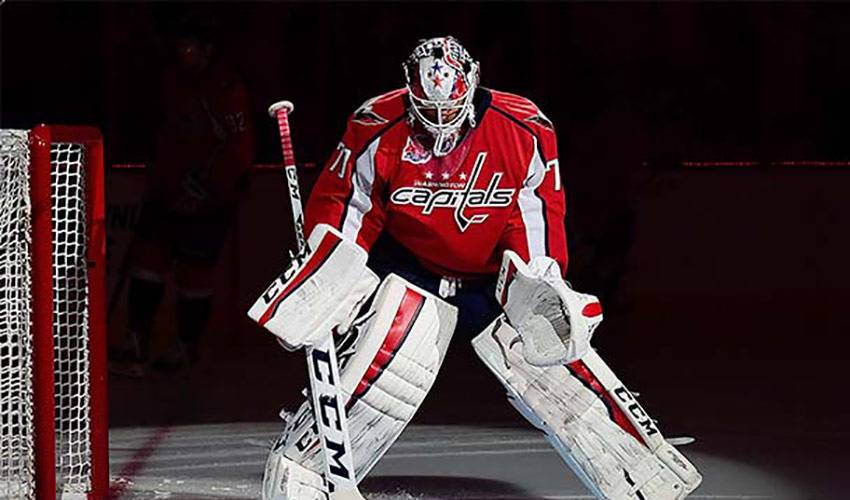 It was all about the numbers for Braden Holtby on Monday night. There’s no doubt No. 70 was worthy of First Star honours after making 30 saves in Washington’s Game 3, 1-0 win over the New York Rangers.

The victory was the fifth of this year’s playoffs for the 25-year-old Saskatchewan native, an effort that saw his goals against average fall to a sparkling 1.54 mark.

STAT PACK: 11-9-10. That’s the number of saves Holtby made in each period to earn his first shutout of this year’s playoffs.

NEED TO KNOW: His father, Greg, was a goaltender for the Saskatoon Blades and the University of Saskatoon.

HAPPY ANNIVERSARY, BRADEN: It was the second career playoff shutout for Holtby, whose first one happened to come two years ago to the day, also a 1-0 win over the Rangers.

NO GOALS FOR YOU: On April 8, 2015, Holtby and the Caps defeated the Boston Bruins, 3–0. Having already blanked Boston in his previous two games in 2014-15, he became the first backstopper to net a season-sweep of three or more games against Boston without allowing a single goal against.

COME ON IN: Holtby made his NHL debut on November 5, 2010, against Boston, replacing Washington’s starter with 10 minutes left and the game tied 3-3. He turned aside four shots as Washington went on to win.

WORDS OF WISDOM: The best advice Holtby ever received was a quote by Victor Hugo written on a plaque given to him by his grandparents. "There is nothing like a dream to create the future."

REBEL YELL: Holtby’s most embarrassing hockey moment was his first WHL game in Red Deer. "Right before the national anthem, a guy yells out the goalie's name and the whole crowd yells ‘sucks’ after. I went out to the hash marks and tripped and fell right as the crowd was yelling it.”

HONOURABLE MENTIONS: Jay Beagle (1G) scored the game-winning tally against the Rangers. Henrik Lundqvist made 21 saves in another strong performance by the New York netminder.