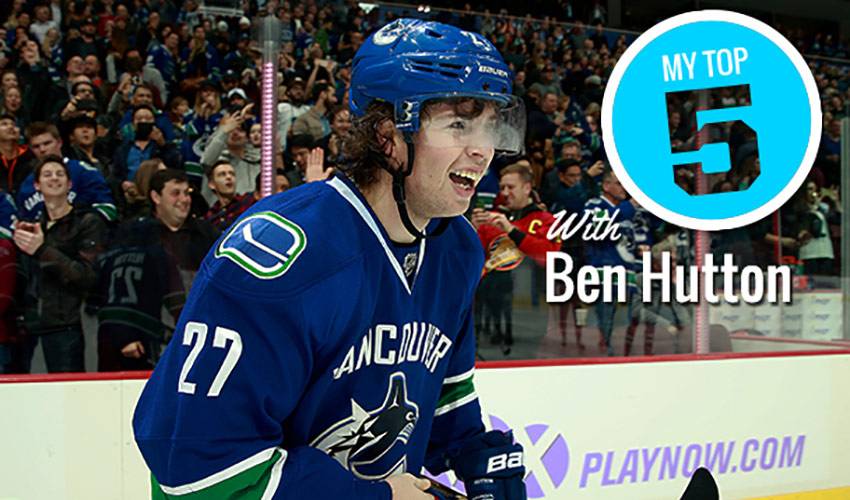 When he’s not patrolling the Vancouver blue line, Ben Hutton has been known to show off some pretty sweet dance moves – and vocal talents – away from the rink.

So, it’s only appropriate that Hutton selected the five people he’d love to go head-to-head with on Lip Sync Battle, the hit show that pits two celebrities squaring off for “singing” bragging rights.

“He was my favourite rapper growing up and I’d love the chance to see if I could hold my own against him.”

“She’s a got a great voice and some excellent songs. (Laughing) And, just because.”

“Obviously, he’s a really funny guy and it would be an absolute blast to go up against him in a lip sync battle. It would definitely be a lot of fun.”

“I would take Bo because he did not want anything to do with that lip sync battle earlier this year. I have to include him on my list.”

“He’s on the Dallas Stars and we’re best friends. During our college days (University of Maine), we’d have some pretty serious dance-offs. I crushed him.”

“When it comes to music in our dressing room, I do have some say. Sometimes they’ll ask me to DJ, but it’s never really one set guy who handles the music. Everyone gets their picks and that way everybody is happy. I love rap, so I try to play as much as I can when I get the chance. I will mix it up though. You want to make sure there’s variety. (Goalie) Ryan Miller, he’s pretty old school and likes classic rock & roll. He’s a tough one to please, but you do your best.”