Hutton on Pettersson: I’m glad he’s on our side, let’s put it that way 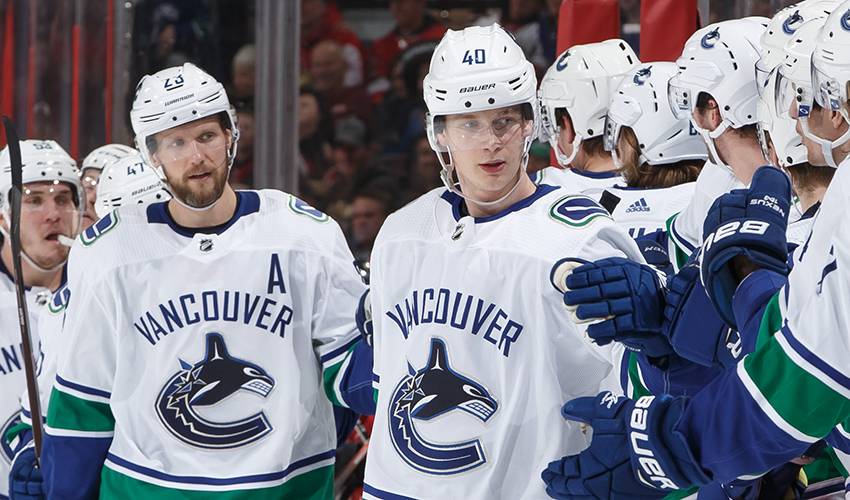 Whether it’s in the Vancouver Canucks dressing room or in the car, Hutton, in his fourth NHL season, and Pettersson, the rookie sensation and 2019 NHL All-Star, enjoy rapping about a shared interest.

“I like rap music, the upbeat stuff,” started the 25-year-old Hutton. “And he likes that, too. In fact, we’re always exchanging new songs that we find. I definitely like that about him.”

The defenceman also likes what the fifth overall pick in the 2017 NHL Draft brings to the Vancouver lineup.

Pettersson, who scored a goal and an assist in his NHL debut on October 3, has been an offensive stud for the Canucks. In 37 games, the Swede has 22 goals and 42 points. Seven of his tallies have been game winners.

“Obviously, he’s a game changer,” praised Hutton of the forward who tallied a goal and an assist in his NHL debut on October 3. “He can always make something out of nothing. What I like about him is that he’s a quieter kid, but he’s very humble. He doesn’t take anything for granted. He does all the small things that make him a good teammate. He buries his head and works hard.”

Not surprisingly, Pettersson, who received Rookie of the Year, Best Forward, MVP and Playoff MVP honours in the Swedish Hockey League in 2017-18, has endeared himself to fans and teammates alike.

“Just today, he was cracking jokes at the rink, giving it to a few of the guys,” said Hutton. “You’re really impressed with the way he carries himself. He’s quiet, but he’s confident. It’s good to see. I’m glad he’s on our side, let’s put it that way.”

And Hutton is thrilled to have a shared interest with Pettersson, one that he hadn’t anticipated.

“He actually caught me off guard with his music,” he offered. “I didn’t think that would be his style. We were driving in the car and he turns the music on and I said, ‘Now we’re going, Pete!’ So, that was good.”

If Hutton had to select one New Year’s resolution for the emerging superstar, the topic of music came up once again, but only after the blueliner offered up a resolution of his own.

“For me, I don’t know, maybe I’ll give up cookies,” he said. “I’ve got a little sweet tooth. I’ve been good, but I’ll consider giving up the cookies. That will be perfect after Christmas.”

And what about Pettersson?

“Maybe he can try to introduce me to some more Swedish rap music,” suggested Hutton. “He’s let me listen to a little bit of it, but some new stuff would be great.”

Player of the Week | Elias Pettersson

Elias Pettersson moved up to the sixth spot in the NHL scoring race with his 20th point of the season after tallying nine points in four games (3-6–9).