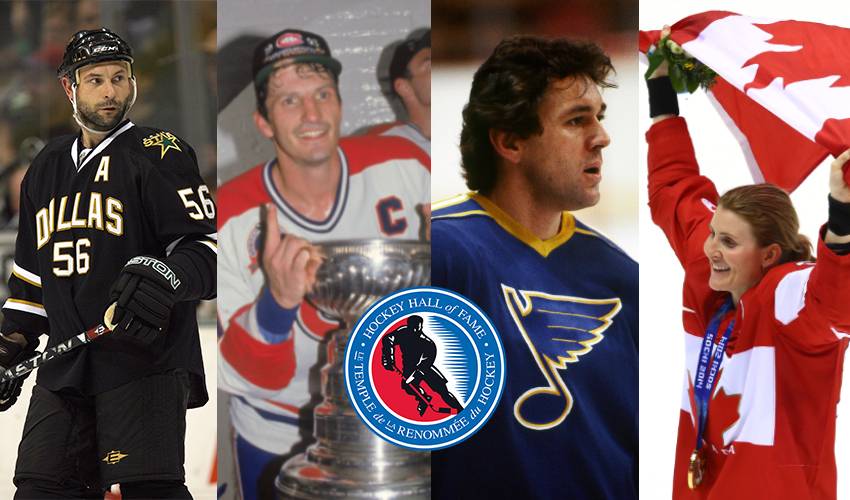 Hayley Wickenheiser's accolades have a hard time keeping up with her.

The Hockey Hall of Fame wasted no time hustling Wickenheiser into its gallery of heroes in her first year of eligibility.

But when board chairman Lanny McDonald phoned her Tuesday to relay the joyful news, Wickenheiser was sequestered doing mandatory medical school course work at the University of Calgary.

"I knew my phone was blowing up. I couldn't answer it," Wickenheiser said. "My first call was back to Lanny."

The 40-year-old from Shaunavon, Sask., joins players Guy Carbonneau, Vaclav Nedomansky and Sergei Zubov and builders Jim Rutherford and Jerry York in the 2019 class of inductees.

The induction ceremony is Nov. 18 in Toronto.

"Outside of winning an Olympic gold medal, for a personal accomplishment, this is probably the holy grail," Wickenheiser said.

"You're with the best players to have ever played the game, male and female. It's pretty cool.

"Today I had just so many different people reaching out from both the male and female side. It brought back a lot of memories from the different eras of my hockey career."

Wickenheiser was the only first-year eligible player to be selected.

There were no girls' teams for her to play for in Calgary over three decades ago.

Wickenheiser tucked her hair up under her helmet and played on boys' teams. She wasn't always welcomed by players or their parents.

"I think it symbolizes where the women's game has come and also the struggles too," she said. "Today, I was thinking about all the tough times I had in hockey.

"Nobody will really talk about those things when you go into the Hall of Fame, but those are the things you think about as a player with your family and all the people that helped you through the years."

During her 23 years playing for Canada, Wickenheiser scored 168 goals and assisted on 211 more in 276 games while winning four Olympic gold medals and seven world championships.

She announced her retirement in January, 2017, after playing her last game April 4, 2016, at the women's world championship.

Wickenheiser was a star of female hockey when the emerging game desperately needed one.

She pushed the envelope of what was possible for a female athlete twice playing men's professional hockey in Europe.

Wickenheiser is currently an assistant director of player development for the Toronto Maple Leafs, in addition to her medical studies.

She's the seventh woman to be inducted into the Hockey Hall of Fame.

Carbonneau, a native of Sept-Iles, Que., was the last captain of a Canadian team to win the Stanley Cup, doing so with the Montreal Canadiens in 1993.

He won three Selke Awards as the NHL's top defensive forward and three Stanley Cups — two with Montreal, one with the Dallas Stars.

"Just to be on the same list as guys like Jean Beliveau and Guy Lafleur and Wayne Gretzky, it's unbelievable," Carbonneau said.

"People thought when I did become a defensive player that I sacrificed a lot of offence. I see it the other. It gave me chances."

Rutherford, from Beeton, Ont., began his management career with the OHL's Windsor Spitfires in 1984.

He then became general manager of the Hartford Whalers for 20 years and won a Stanley Cup in Carolina in 2006 after the franchise moved to Raleigh.

Rutherford has since won two more Stanley Cups as GM of the Pittsburgh Penguins.

"One of the advantages I think for me when I retired as a player, I didn't try to stay in the NHL," Rutherford said.

"I went back to the grassroots. I went all the way back to youth hockey for a couple of years and then got the opportunity to manage in the Ontario Hockey League and kind of worked my way up.

"We won the Stanley Cup in Carolina against the odds. We certainly weren't the odds-on favourite to win it that year.

"And then I was fortunate to have the opportunity to be hired by Pittsburgh and I already had a great advantage when you come into a team with (Sidney) Crosby and (Evgeni) Malkin and (Kris) Letang."

Nedomansky played 12 seasons in Bratislava before becoming the first athlete from an Eastern European communist country to defect to North America to pursue a pro hockey career.

He played in the WHA with Toronto and Birmingham before joining the Detroit Red Wings as a 33-year-old rookie in 1977.

"I'm proud to be the first player from a communist country to come and play in North America," Nedomansky said.

"I was eight years old when I travelled with the national team to a tournament in Canada," Zubov said.

"I had a chance to walk into the Hall of Fame. Back then, I couldn't even think of, dream of, that one day I would have a chance to be part of it.

"It's truly special. You realize you've done something in your life that you can be proud of."

York is the winningest coach in NCAA Division 1 men's hockey with over 1,000 victories. He's navigated Boston College to four national titles in 26 seasons there.

"They seem to make you a better coach when you have those players," York said. "Never once did I think I'd go in (the Hall) in any category whatsoever. Just really surprised."

Note to readers: This is a corrected story. An incorrect nationality for Vaclav Nedomansky was published in a previous version.

Three-time Stanley Cup champion Guy Carbonneau offers up his Top 5 bits of advice for young players when it comes to playoff hockey.