Ever since Joe Pavelski went down with a gruesome head injury in the first round of the playoffs, the mantra for the San Jose Sharks has been to stay alive in the post-season long enough for their captain to come back to the ice. 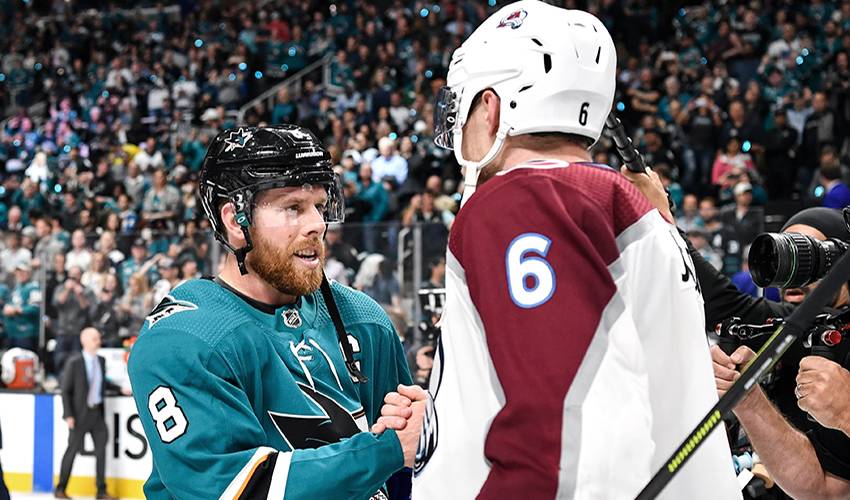 SAN JOSE, Calif. — Ever since Joe Pavelski went down with a gruesome head injury in the first round of the playoffs, the mantra for the San Jose Sharks has been to stay alive in the long enough for their captain to come back to the ice.

What a return Pavelski made to send the Sharks into the Western Conference final.

Pavelski scored one goal and assisted on another in the first period Wednesday night to lead San Jose to a 3-2 victory over the Colorado Avalanche and a date in the conference final against St. Louis.

"You know, you're almost speechless," coach Peter DeBoer said. "Many people in the building, a lot of them saw the injury. I don't think you saw the recovery and what he went through and how questionable it was whether he would even be able to be out there tonight. It really was a coin toss, and he obviously made the ultimate decision. What an impact. What do you say? He's a special player, a special guy."

Pavelski went down in Game 7 of the first round against Vegas when his helmet slammed to the ice, causing a cut to his head that needed eight staples to close and a concussion.

The injury was severe enough that Pavelski's teammates doubted he'd be able to make it back this round. But he did everything he could to get back on the ice, then with the team to Denver for Game 6 and knew he'd be back as soon as Gabriel Landeskog's overtime winner forced the seventh game.

"To be honest after they scored in Game 6, it was kind of like a switch went on," he said. "We've been working and feeling good. That's when I figured it was on. Came back and got some things checked out. Wake up this morning, feel good, skated a little bit, do a couple of morning skate drills we usually do and get ready."

Now after surviving what they did the first two rounds, the Sharks are positioned to deliver the long-awaited title that they have never been able to seize.

San Jose fell behind 3-1 in the first-round series to Vegas before rallying for three straight wins in the greatest comeback in franchise history. The Sharks needed a 58-save performance from Martin Jones and a short-handed goal from Tomas Hertl to win Game 6 in Las Vegas and then the improbable comeback in Game 7 after Pavelski got hurt.

His injury led to a major penalty that the NHL later acknowledged shouldn't have been called. But that allowed the Sharks to score four power-play goals to erase a 3-0 deficit in the third period. San Jose allowed the tying goal before winning it in OT on a goal by fourth-liner Barclay Goodrow.

They didn't face nearly that type of adversity in the second round against the Avalanche when they won all the odd-numbered games. But they managed to do it without their captain and leading goal scorer in the first six games.

"I think that we're willing to do whatever it takes to go all the way," Erik Karlsson said. "It's good to have some adversity. I think that we've definitely had that. This series we've been in charge for the most part of it, but couldn't close it out until today. We've got to learn from that and more forward and prepare for the next round."

The Sharks now head into the conference final against the Blues starting at home Saturday night full of confidence — even if they are a bit weary following two seven-game series.

But with a healthy Pavelski, the ingredients are all in place for a possible title run. Hertl and Logan Couture lead the league with nine goals each this ; Brent Burns had 10 points by himself in the second round as part of a deep blue line that features another playmaker in Karlsson and shut-down defender in Marc-Edouard Vlasic; and Jones has been stout in net following a rough four-game stretch early in the series against Vegas.

"It's a war of attrition, the NHL playoffs," DeBoer said. "When you get a team like Vegas in the first round and a team like this in the second round it really reinforces how hard it is to go on runs and get this deep. I think our guys appreciate that. This is a tough league with a lot of parity. We earned this one. Coming off that seven games against Vegas, emotionally drained, banged up with Pav.

"I knew this would be a big hill to climb. I thought our guys did an exceptional job of doing what we had to do to have a chance."