May 3, 2021
By:
David Morassutti
Player of the Week
Sam BennettFlorida Panthers 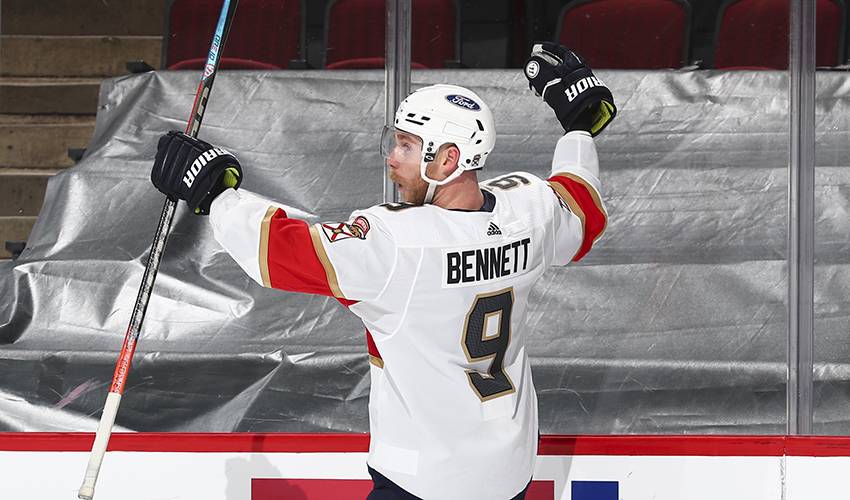 Sam Bennett has settled in nicely since joining the Florida Panthers at the trade deadline. This past week, the forward shared the second spot in league scoring while building his point streak to five games.

It hasn’t taken Bennett long to develop chemistry with his new linemates, registering 13 points in his first nine games with Florida.

The 24-year-old credits increased opportunity for getting off to a strong start with his new team, which he joined April 12 in a trade with the Calgary Flames.

"I've always known that I want to take on a bigger role and play a bigger role," Bennett explained on "The Chirp with Daren Millard" podcast. "Now that I'm getting that opportunity, I feel like I've been taking advantage of it a little bit... I'm not going to get comfortable. I'm not going to get complacent. I know it's only been a couple games. I have a lot more to prove and a lot more to give. I'm going to keep going out there and playing my game every chance I get."

Bennett scored the lone goal in the Panthers’ 4-1 loss to the Nashville Predators at Bridgestone Arena Monday night.

Just under five minutes into the game, Bennett got the Panthers on the board with his eighth goal of the season.

Bennett recorded three assists as the Panthers clinched a playoff berth in a 7-4 victory over the Predators on the road Tuesday night.

With the game tied 1-1 to start the second period, Bennett helped the Panthers take the lead on a tic-tac-toe play that would lead to a power-play goal by Anthony Duclair.

With the Predators ahead 4-3 heading into the third period, Bennett chipped in with a pair of helpers in a four-goal period for Florida, recording secondary assists on goals by Owen Tippett and Jonathan Huberdeau.

Sam Bennett scored the overtime game-winner to give the Panthers a 4-3 win over the Chicago Blackhawks at United Center Thursday night.

Bennett took a pass from teammate MacKenzie Weegar and roofed a shot over Kevin Lankinen's glove to avoid a shootout, while extending his point streak to four games.

"I saw a little spot, I aimed for it and it went in," Bennett said about the goal. "It feels really good."

This was the seventh time in eight games Bennett had registered at least one point for the Panthers while also providing some physicality with 26 hits over that span, including six against the Blackhawks that night.

"It's huge," Bennett said after the game. "We know how important it is to play the right way for the rest of the season. We can't let off and change our game. We've got to go into the playoffs playing the right way and playing hard every night. That's how we're going to have success in the playoffs."

Bennett extended his point streak to five games with a pair of assists in the Panthers’ 5-4 win over the Blackhawks to close out their road trip Saturday night.

Bennett helped the Panthers take the lead by sending Duclair out of the zone with a long pass, which eventually led to the opening goal of the game.

In the third period, Bennett helped Florida increase their lead by finding Tippett alone in the slot from behind the net.

Bennett will look to continue his point streak as the Panthers host the Dallas Stars on May 3 and welcome the Tampa Bay Lightning on May 8 before closing out their regular season May 10.

Over their last 11 games, the Panthers have an 8-2-1 record and remains two points behind the Carolina Hurricanes for first place in the Central Division.