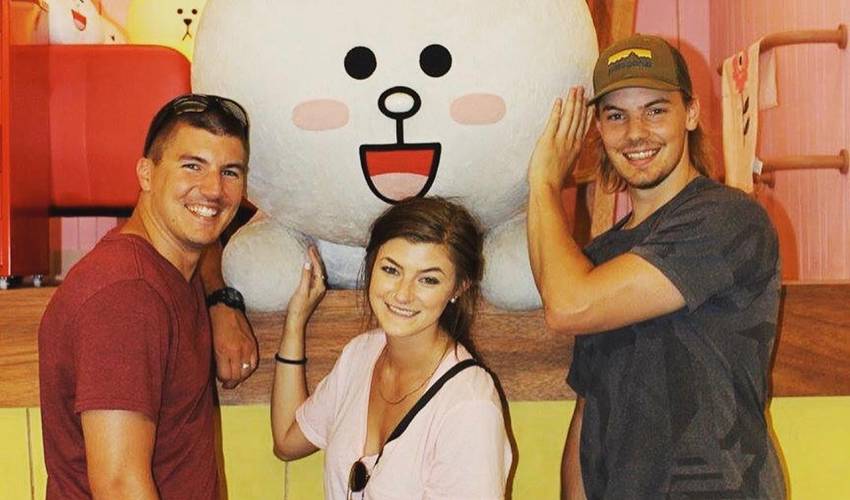 One is an NHL defenceman, one is a captain in the U.S. Air Force and one works in the interior design industry.

It’s the story of the Mayfield siblings, Scott, Patrick and Sarah, who live three very different lives but share one lifelong bond.

The family photos, both then and now, are picture-perfect representations of the two brothers and their sister, images of smiling faces and an obvious closeness.

“We are a really close family,” said Scott, who has played his entire NHL career with the New York Islanders. “Sarah lives about a mile from me in Denver where I am during the summer. We see her quite a bit then. My fiancée Emily and her are best friends. We try and spend as much time together as a family that we can. It’s tough because Patrick is in the military and he’s travelling a bunch. He’s in different places all the time, but he’s stateside now, in New Mexico. We were actually able to have Thanksgiving together this year. That was really special. When you’re all very close and you go your separate ways, it’s important to find the time to be with one another.”

Growing up in St. Louis, the Mayfield kids spent countless hours together, including the days when they would travel with their parents, Jane and Andy, to out-of-town hockey tournaments.

Scott has fond memories of those times.

“Chicago was the main place we traveled to,” the 28-year-old recalled. “At times, we were travelling there every other weekend. Whether it was just seeing a new city, exploring what it had to offer – I remember all of that. I remember the team-bonding things we did, playing mini sticks in the hallway and the parents all hanging out together in a room. Those are great memories.”

As is the time that Scott and his older brother had the opportunity to play on the same hockey team during their teenage years.

“It was an awesome experience,” said Patrick, of their high school experience. “I was a goalie, so we would always end practices with a shootout for bragging rights. My mom saved and framed the scoresheet of a game where I assisted on one of his goals too.”

The brothers were reunited through hockey when Patrick was welcomed as one of the Military Heroes of the Game, at an Islanders home game last February.

“Getting to play one year of high school hockey together with Patrick was a great memory,” said Scott. “Whether it was playing street hockey with our friends or just us, there are a lot of special memories from those days.”

Their sister, the youngest of the trio, has equally fond remembrances of their childhood times.

Although it wasn’t often, she reveled in getting the upper hand on her older brothers.

“My favourite thing about growing up was playing games or sports with Patrick and Scott. They both are extremely competitive and I am not at all, so it would always be funny when I won something. I never really cared when I won and that would always irritate them so much. I also loved going on road trips for tournaments and playing shinny hockey in the hotel hallways… until we got in trouble and had to go back to our room. We went on so many long road trips and they were always a blast.”

The brothers were happy to have their sister tag along in whatever they did.

There were, however, occasions when Patrick was outnumbered – literally.

“My best memories with Sarah were when I picked her up from dance classes and let her drive me home even though she was still only on a driving permit. Scott and Sarah always ganged up on me since they were only a year apart in age and I was three years older.”

Despite hectic schedules and having different zip codes, the three remain a tight-knit group, constantly checking in on one another and sharing the latest updates in their personal lives.

Seeing their brother skating on the NHL stage is a sight that never gets old for Patrick and Sarah.

“I’m most proud of Scott for always staying humble through his rise to the NHL,” said Patrick. “He always worked hard and was never complacent with how far he had climbed.”

Added Sarah, “I am honestly so proud of Scott every time I watch him play. It makes me so happy to see him doing something he loves and has worked so hard for. It can be rare for people to find something they are so passionate about when they are young, but he did. It’s so nice to watch him make his dreams come true.”

Perhaps it’s one of the things they can discuss on another family road trip one day.

Scott would certainly be up for the adventure.

“I can see that happening. Now that my parents bought an RV, it would be a lot of fun to do that.”

For the Mayfield kids, it has, and always will be, about having fun.

“I think the biggest thing my parents always preached to all three of us was to have fun in whatever we did,” offered Scott. “I didn’t even play Triple-A – which I did for one year – until I was 15. That’s the only time I made Triple-A. Otherwise, it was playing with friends, and getting that chance to play with my brother. Discipline and work ethic were two of the other things my parents always preached. Sarah, Patrick and I were all very focused on what we wanted, we had goals and we all worked hard to achieve them.”