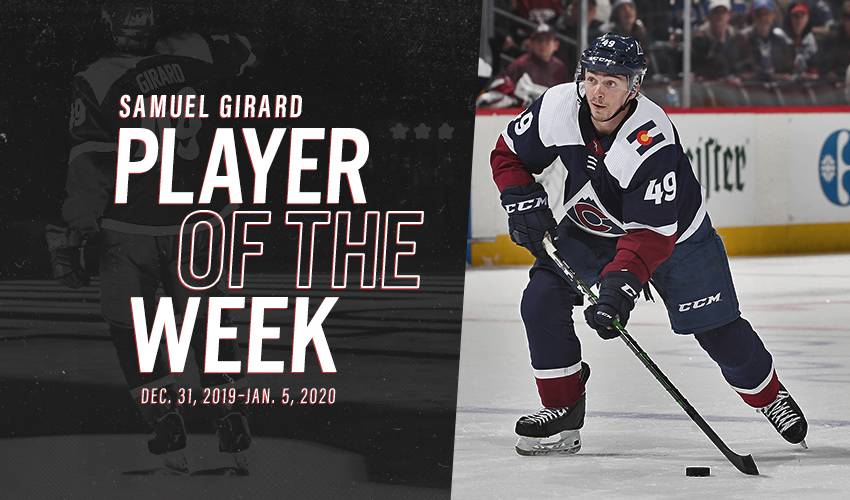 The 21-year-old also dished out a career-high four assists in Thursday’s game against the St. Louis Blues. He and defensive partner Cale Makar became just the second pair of teammates 21 years old or younger in the last 30 years to have a four-assist game in the same season, following Sidney Crosby and Evgeni Malkin back in the 2006-07 season.

With 11 assists in his last 10 games (t-third among defencemen in that stretch), Girard is now five points shy of matching last season’s career-high in points (27).

With the Avs down 1-0, Girard made a couple of nice spin moves before setting up teammate Nathan MacKinnon, whose wrist shot found its way through traffic and past Jets netminder Connor Hellebuyck.

With the Avs trailing again, Girard and MacKinnon would connect one more time on the power play in the middle frame as Girard teed up MacKinnon, who blasted a bullet of a one-timer to tie the game at two.

Unfortunately, the Avalanche couldn’t hold off the Jets as Kyle Connor went on to score his second career hat trick to help Winnipeg end 2019 on a winning note.

With the Avalanche up 1-0, Nazem Kadri would double the team’s lead off a rebound from Girard’s initial point shot to put it past Blues netminder Jordan Binnington from a sharp angle.

Girard and Kadri connected again in the third period as Girard faked a wrist shot before making a no-look pass to Kadri, who scored the one-timer to put the Avalanche up 5-2.

With the Blues getting into penalty trouble, the Avs took advantage as Girard registered his third point of the night on teammate J.T. Compher’s goal. Girard tallied his fourth assist on the night as MacKinnon took his pass and wove his way through the offensive zone before setting up Joonas Donskoi for the team’s final goal of the night.

It was a big win for the Avalanche who currently trail the Blues in the Central Division standings by five points. Girard told reporters after the game that he was happy to see how much the team was sharing the puck and showing more of a willingness to shoot.

Girard extended his point streak to three games as the Avalanche won their second straight with a 5-2 victory over the New Jersey Devils at Prudential Center Saturday night.

He registered multiple points for the third-straight game, this time with a pair of assists on goals by teammate Mikko Rantanen, who recorded his second NHL career hat trick and first since 2017.

With the game scoreless, Girard helped get the Avs on the board by starting the breakout before passing the puck to MacKinnon – who would dish it off to Rantanen for his first of three on the night.

With the Devils looking to tie the game with netminder Mackenzie Blackwood on the bench and an extra attacker on late in the third, Girard picked up the loose puck in the defensive zone and sent Rantanen streaking with a breakout pass as the Avs winger put the puck into the empty net to complete his hat trick.

Girard will look to extend his point streak to four games when the Avalanche travel to Long Island to take on the New York Islanders Jan. 6. The team will conclude their road trip against the New York Rangers Jan. 7 before hosting the Pittsburgh Penguins Jan. 10.