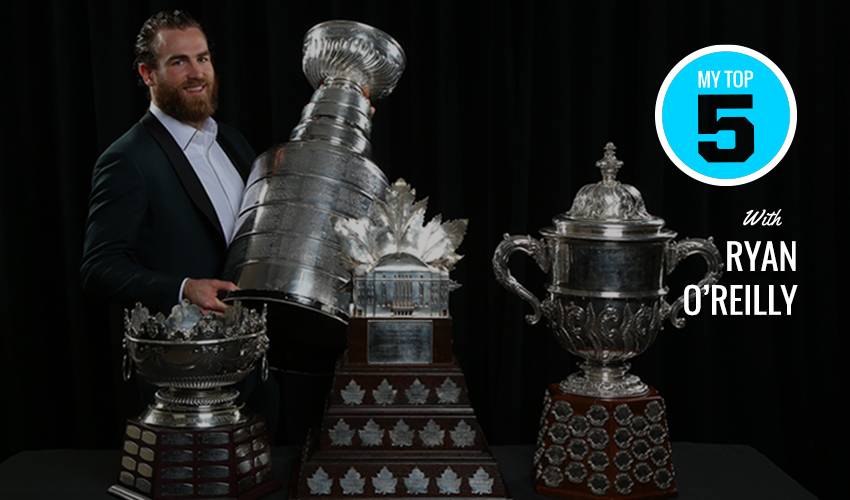 For Ryan O’Reilly, it doesn’t matter where he happens to be, including on a stretch of highway in St. Louis.

It’s been a whirlwind for the 28-year-old centre since hoisting the Cup, but the amiable Ontario native gladly took a few minutes to speak with NHLPA.com for this week’s edition of My Top 5.

This week’s topic? You guessed it.

1. Say and do what you feel

“The celebration certainly stands out as one thing (laughing). You have a green light to do pretty much whatever you want. That’s pretty fun. It’s one of those moments where it’s tough to describe your emotions, but it’s something you’ll never forget.”

“The response of the city was just amazing. Everywhere you go, you’re getting stopped left and right. I’m at the airport now. Everyone in the city knows our faces. It’s pretty funny... it’s like we’re local celebrities.

“I was driving on the highway and I’m driving a little bit faster than the car beside me. The car pulls up beside me and the driver just starts honking. It startled me. I look over and the person is jumping up and down in the car, screaming, Yeah! We did it!’ I looked over said, Yeah, we sure did!’ It startled me, but it was cool. Everywhere you go, this city just cares so much about it.”

“Just to see the response of my family – that’s been great for me. They can’t directly really impact the games, but everything they did for me growing up, seeing the look on their faces and sharing that with them, it’s been really special. You really appreciate the time and effort they put in for you to realize your dream. To share it with them, it takes me back to when I was a kid, all the tough times and sacrifices they made for me.”

“To be able to share it with this group of guys is really great. Everyone knows the story of how we struggled and found a way to bounce back. To have that rollercoaster of a year and to know what we did, now we can finally relax and enjoy that moment together. It’s pretty darn cool.”

“It still [winning the Cup] hasn’t hit me yet. I still can’t believe it. With having my son [Jameson], you go home and take care of him. He has no idea what’s going on. But you begin to realize that you’ve achieved a childhood dream. I know at some point it’s going to hit me and I’ll break down, but I still can’t believe we actually did it. It’s the coolest thing in the world.”

Ryan O’Reilly Does It Right