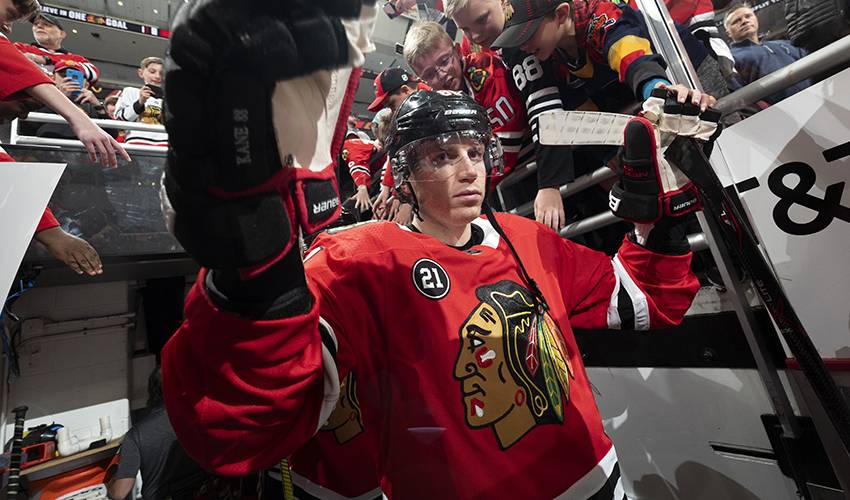 “I think it’s a pretty underrated award, to be honest. Obviously, the man whose name is behind the award and having won it before, it’s pretty special.”

Now a second-time finalist, Patrick Kane knows first-hand what it means to receive hockey’s most unique individual award, voted on by the players themselves.

For his 2015-16 season, the forward became the first American-born player selected as the recipient of the Ted Lindsay Award (TLA), presented annually “to the most outstanding player in the NHL” as voted by National Hockey League Players’ Association (NHLPA) members.

Kane was also the first Chicago Blackhawks player to receive the award after leading the league in points (106) - the only player to reach the 100-point mark that season.

This year, Kane is once again on the shortlist for the TLA, joined by Tampa Bay’s Nikita Kucherov and Edmonton’s Connor McDavid as finalists.

The votes are in and the players have spoken – the 2018-19 #TedLindsayAward finalists are @88PKane, @86Kucherov, and @cmcdavid97! More on the TLA and this season’s finalists: https://t.co/4kOr5sKpti pic.twitter.com/jwZ9kiRMII

It’s no surprise to see any of those names on the list, including Kane’s.

The Buffalo, Yew York, native skated in 81 regular-season games with the Blackhawks and led the club in goals (44), assists (66) and points (110) to set career highs in the latter two categories. He equaled Kucherov for the second-most even-strength points (80) in the league, and slotted in third in NHL scoring and points per game (1.36) to trail only the other two TLA finalists, while his personal-best average ice time (22:29) ranked third among forwards.

The 2018-19 season was the second time Kane reached each of the 40-goal, 60-assist and 100-point marks in a single campaign, having previously done so in 2015-16 when he received the TLA. He’s looking to become only the 10th recipient at 30 years of age or older in the award’s storied 48-season history.

“The fact the players are voting on it is something you really appreciate,” said the first overall pick in the 2007 NHL Draft. “Getting to be voted one of the top three by your peers – it’s one of the coolest awards hockey gives out.”

It’s a testament to Kane’s talents and the widespread respect he’s earned throughout the league for his play, but the proof is also in the numbers. Amid a 20-game point streak this season, Kane surpassed 900 NHL career points to become the fifth Blackhawks player to reach the mark.

Is he surprised that some of those who voted for him are likely players he got the better of in 2018-19?

“I’m not really thinking about it like that,” Kane said with a laugh. “I’m looking at it more about the respect other players around the league have and that you have for them, especially when there are so many great players in this league and only three are finalists for this award. It’s pretty special in that regard.”

A three-time Stanley Cup winner, as well as a Conn Smythe Trophy, Art Ross Trophy and Hart Memorial Trophy recipient, Kane has high praise for what the TLA represents.

“I thought it was cool to win the Hart, but the cherry on top was to win the Ted Lindsay,” he said of the award named after the Hall of Fame forward, Ted Lindsay, who played a pivotal role in the creation of the original NHLPA. “I think it’s cooler than the Hart because it is voted on by the players. To have that one in your back pocket, in your trophy case, that’s something no one can ever take away from you. It’s also something you’ll never forget.”

While the TLA bears the individual’s name, Kane was quick to note that his 2016 TLA honour and finalist status this year are the result of a team effort.

“A lot of guys on our team had career years,” noted Kane. “You look at young guys like [Dylan] Strome and [Alex] DeBrincat. They’re still young, but they had big years for us. “Tazer” [Jonathan Toews] had a career year. Erik Gustafsson had a great season as well. He was a big-time player on the power play. It’s definitely one of those things you don’t do by yourself. You need someone helping you out or being on the receiving end of plays. The help of your teammates goes a long way getting you to this point.”

The 2019 TLA recipient will be announced at the NHL Awards June 19 in Vegas.

Check in with NHLPA.com over the next couple of weeks for more TLA profiles, news, updates and more!

Patrick Kane - Player of the Week

After reaching the 100 point plateau for the 1st time in his career, Patrick Kane is the NHLPA.com Player of the Week!

'Hawks star excited to be part of the All-Star weekend festivities in Raleigh, N.C.