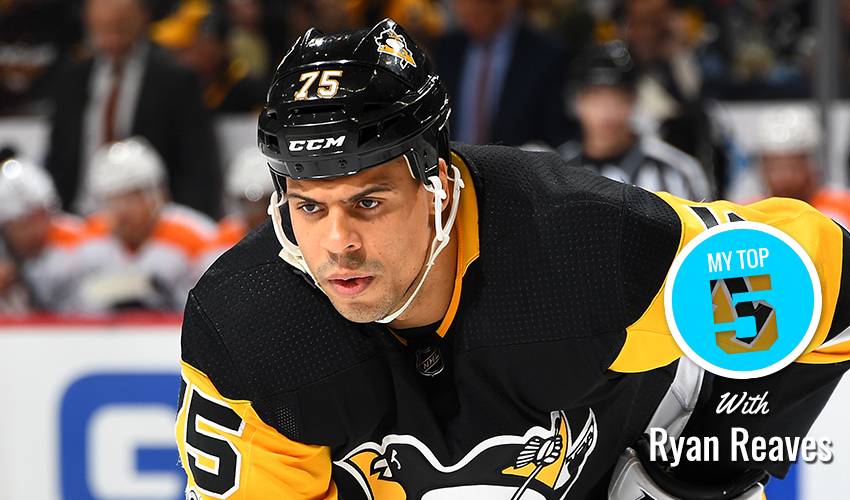 He’s one of hockey’s toughest players, a bruising forward who is closing in on 500 NHL games in a career that began in 2010-11 with St. Louis.

The 30-year-old Pittsburgh Penguins winger offered up his five favourite athletes of all time, a list that includes a pair of Hockey Hall of Fame inductees, a familiar name from the CFL and one NFL Hall of Fame superstar.

“He was my No. 1 hockey guy growing up. I kind of followed his career. I was always Montreal in NHL ’94 on Sega.”

“It’s a little bit of a theme here, going with Joe Sakic. When Patrick Roy went to Colorado, Joe became one of my favourites, along with Peter Forsberg. I really liked the Avalanche when I was younger. They were a new team, I jumped on board, and they won the Cup their first year. They were my team growing up.”

“He’s definitely my favourite football player of all time. Again, I followed his career from the San Francisco 49ers to the Oakland Raiders. I know he played for the Seattle Seahawks for a little while, but when he went to the Raiders, I just kind of stuck with them. Now they’re my favourite football team, through thick and thin.”

“When I got to be a little older, Todd Bertuzzi became one of my favourite hockey players. I feel like I wanted to mould my game around him. He played physical and he played hard. He could also put the puck in the net. I lined up next to him when he was in Detroit in my very first year. I had a fight the night before and did pretty well. He looked at me when we were across from one another and said, ‘Nice fight last night, Kid.’ I thought that was the coolest thing ever – Todd Bertuzzi saw my fight.”

Todd Bertuzzi, who has experienced much during his NHL career, recently reached the 1000-game mark in style with a game-clinching shootout goal against the Minnesota Wild