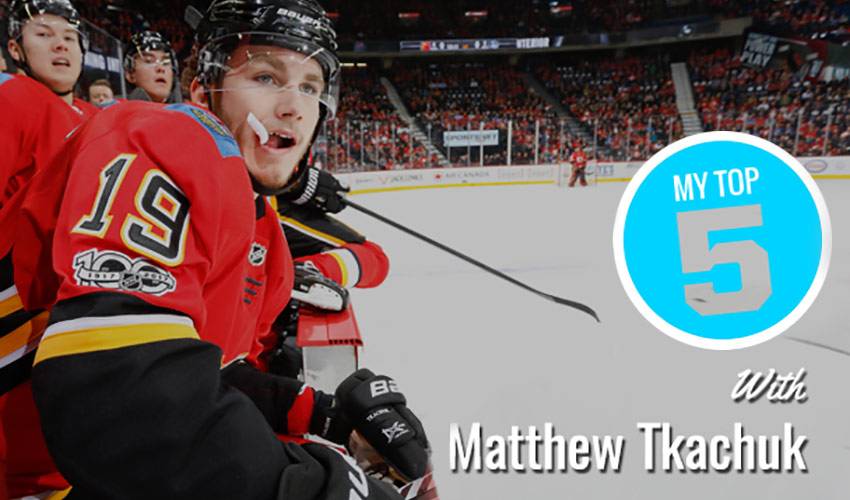 He impressed in his first NHL season, a rookie campaign that produced 48 points in 76 games and a seventh-place finish in voting for the Calder Memorial Trophy.

There’s been no sophomore jinx for Matthew Tkachuk, who continues to be a sparkplug for the Calgary Flames in 2017-18.

The 19-year-old, closing in on his 100th NHL game, stopped by NHLPA.com to deliver his Top 5 hockey idols. No need to guess which former big-league star topped his list.

“It’s an easy one. It would definitely be my dad. Not only when he played, I could watch him and learn so much from what he did, but also after he retired when he coached me. Having him there every day really helped.”

“I was a big fan of Sidney Crosby when I was younger. Just how when he came into the league, he took it by storm. I really like what he’s been able to do ever since he started playing in the NHL.”

“I really have a lot of respect for David Backes, Lee Stempniak and Philip McRae. They all lived at my house at different times throughout their careers when my dad played. To see them when they first came into the league -- especially a guy like David Backes, who was at the house for a while when he was up and down between the NHL and AHL at the start of his career – I got to hang out with these guys and learned a lot of from them. It was awesome.”

“He (Backes) was a young guy that came into the league and gave everything he had from the first game. It had an influence on me just how hard he worked and that he treated every day like it could have been his last. There was a time when it could have gone either way, but he worked so hard to get where he is today. He’s a great player.”

“Philip McRae was the last guy to live with us. I was older, so I remember him the most. I can recall coming home and he was there in the summer. I didn’t have school, so I got to be around him almost all day, every day. He was awesome. The last thing you’d figure he wanted was to hang around with a 12-year-old kid, but we’d play mini sticks and things like that. There was also a lot of X Box.”

“With Lee, he’s one of the nicest guys I’ve ever met. To this day, to be able to play against him – I run into him off the ice when we play against one another and say hello – is great. Whenever I see those guys, I get to say, ‘Hi.’ I wouldn’t say we talk about the old memories, but we do laugh about it.”

“I think the one thing in common with the players I chose would be their passion for the game. The focus of all five guys is to be the best they can be and putting in the time and effort to achieve that.”