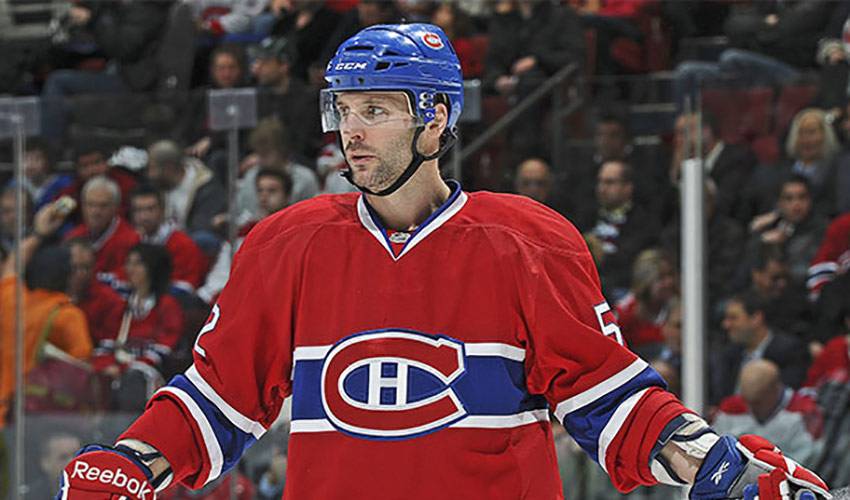 The first thing Mathieu Darche wanted to do when he walked through his front door on Friday afternoon was to hug his kids.

Darche, along with other players, had spent part of the day handing out mini sticks, hats and photos, signing autographs and chatting with kids at the Montreal Children’s Hospital on December 7. It was an eye-opening experience for all. “It was great,” said Darche, who organized the visit. “Priceless, really. This goes beyond the lockout or anything else, especially at this time of the year. Some of these kids are going through a lot. You just hate to see it. But seeing a smile, stopping by a room to say hello, it was meaningful for all of us.” Which is why Darche, 36, made sure to spend some quality time with his two kids when he returned home. “It could be my kids in there,” he noted. “The whole drive home, I wanted to see my kids. You look at your life and then you look at the unfortunate circumstances of others and it hits you hard. Other guys that went said the same thing. When they got home, they wanted to see their kids.” Initially, Darche, who began his big-league career in Columbus, wasn’t sure what to expect in terms of support from fellow players, sponsors stepping up or just how the whole experience would turn out. It couldn’t have turned out any better. Darche was joined by Brian Gionta, Erik Cole, Josh Gorges, Steve Begin and Francois Bouillon. “When I called or texted the guys and told them what I wanted to do, their hearts were in the right place immediately,” recalled Darche. “They wanted to help. Some guys couldn’t make it, but they really wanted to be there. When you walk into a room, see a kid lying in their hospital bed and a big smile comes to their face when they see what they brought you, it doesn’t get better than that.” Players also cooked dinner for families last week at a local Ronald McDonald House, an initiative spearheaded by Colby Armstrong and his wife. Although Darche couldn’t make it, he sent gifts and his wife made dessert. Over his 250 NHL regular season games, the forward has been part of several of these types of visits. There is something about Montreal, however, that seems to make them extra special. “All you want is to see a smile, let the kids know you’re thinking of them,” said Darche. “I’ve been fortunate to have been able to go to many of these visits over the years, but in Montreal, it’s just different. The kids love to meet the players so much. There is a connection.” As for what Darche will take away from the visit, putting his own life into perspective tops his list. “My kids asked a lot of questions when I came home. ‘Why are the kids in the hospital?’ Why do they have to stay there over Christmas?’ I want them to know that other people have struggles they don’t and if they don’t have something they want, it really doesn’t matter. I just want them to grow up to be good people.”

Brian Gionta knows that every night, against every team is a challenge the Habs must be ready for