No Diminished Desire to Win

After 1,000 games played Vincent Lecavalier is still passionate about leading the Lightning to success 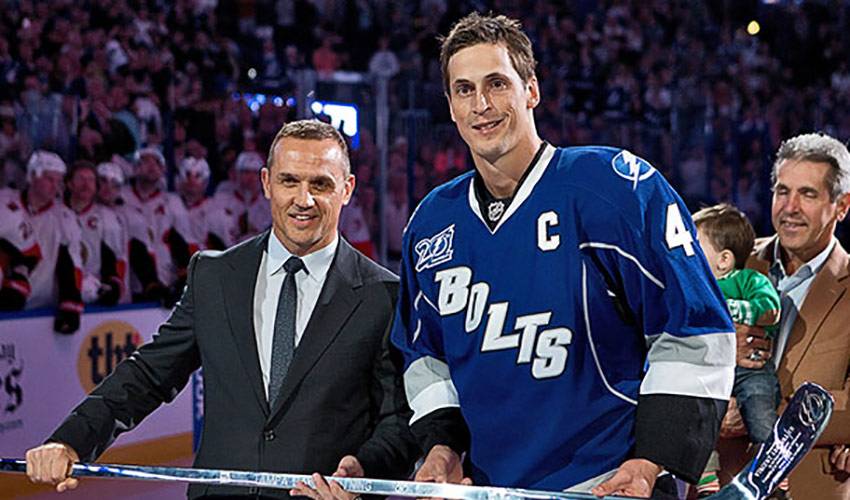 He might refer to his first year in the league as a "blur," but one thing is clear for Vincent Lecavalier, the newest member of the NHL's 1,000 games-played club: he still loves the game as much as ever.

Lecavalier first stepped onto NHL ice in 1998-99, a much-heralded rookie for Tampa Bay, the team's first overall selection in 1998. Almost 15 years later, the Quebec native and captain of the Lightning is now a respected veteran, equally revered for his efforts on the rink and in the community. It's been an enjoyable journey, to say the least, for the now 32-year-old. "My first year, in many ways it's blur," Lecavalier told NHLPA.com the day after his milestone moment. "I do remember certain things, though. I remember (teammate) Enrico Ciccone telling me that it would all go by quicker than I could ever imagine. He was definitely right about that. But I was lucky my first year. I got to play with Wendel Clark, one of the great leaders and great players in the game. He taught me a lot about the game." Lecavalier even managed to be calm and composed when he met one of hockey's all-time stars. "Wayne Gretzky gave me a signed stick my first year," recalled the centreman. "I still have it. He just told me, 'Good luck with your career, kid. I hope it's a good one.’" It has been. Over 1,003 games, Lecavalier has 848 points, a Maurice ‘Rocket’ Richard award for leading the NHL in goals in a season, four All-Star Game selections and a Stanley Cup, that coming in 2004, after a hard-fought series against Calgary. "I guess what I am most proud of, at least at this point in time, is the way the organization rebounded from some tough times in the late 1990s and early 2000s, and we stuck together through it all," offered Lecavalier. "To see the team succeed after that, to see the fans embrace the organization, it's something that really meant a lot to be part of." He's also a huge part of the Tampa community, having established the Vinny Lecavalier Foundation. Six years ago, he announced a $3 million commitment to build The Vincent Lecavalier Pediatric Cancer and Blood Disorders Center at All Children’s Hospital. It is one of the largest pediatric cancer centers in the state of Florida and houses nearly 30 individual patient rooms with accommodations for parents to stay overnight with their child. "I feel very lucky to be playing the game I love," said Lecavalier. "It's important for me to be able to give back something, especially to kids. I've been fortunate enough to meet a lot of really great children and their families." These days, Lecavalier is hoping to make a significant impact on a team that failed to live up to expectations in 2011-12. "None of us were happy missing out on the playoffs," admitted Lecavalier. "The season before, we were one game away from going to the Stanley Cup. Last season, we didn't make it in the top eight. That was a huge disappointment. But it's something that is motivating us this year." As for what motivates him personally, Lecavalier has a simple, but honest response. "You go through good times and bad, injuries, slumps and other tough moments, but you never lose that passion to compete or desire to win," he said. "When you first come in the league, you want to make a good impression, do what you can to show you belong. But one thing that never changes over time is your love for the game." It's something he imparts to the younger players in the Tampa lineup. "I was once the 18-year-old kid getting good advice," he offered. "Hopefully, that's something I can do for the rookies and the new guys." He'll likely tell them what he once heard in his first big-league season. "It does go by fast, but I’d never forget to tell anyone that there's so much to enjoy about it."

Vinny A Flyer Type of Player