While the Calgary Flames court a spot in the Stanley Cup Playoffs, basketball fan Sean Monahan took a time out to talk hoops. Find out which team the forward caught every playoff game for last season in this week's My Top 5. 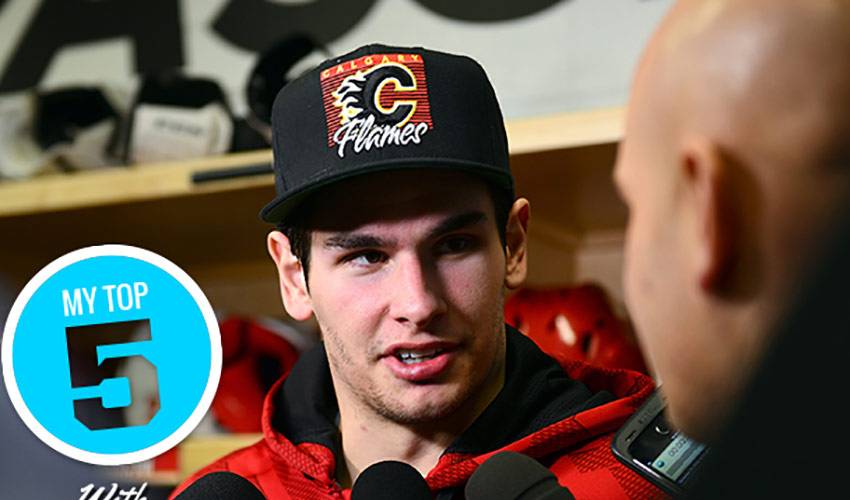 While the Calgary Flames court a spot in the Stanley Cup Playoffs, basketball fan Sean Monahan took a time out to talk hoops, namely, his favourite NBA superstars.

The 22-year-old forward’s list contains one Raptor, a pair of Warriors, a Celtic and a Cavalier.

“I went to every playoff game for the Raptors last year,” said Monahan. “It’s an amazing atmosphere. The fans are great and really get into it.”

“I’m definitely a big fan of Kyle Lowry. Being from the Toronto area, that’s my home team. He carries a big load for the Raptors. He’s always been a clutch guy.”

“I’ve always enjoyed watching Kevin Durant play. He got a lot of criticism going from Oklahoma City to play for Golden State, but he’s still playing his game and excelling.”

“Isaiah Thomas is another dynamic player. He’s a great competitor. He’s not very big, but he’s got that fire in his game and he plays with a lot of emotion. That’s fun to watch.”

“Steph Curry, he’s just amazing to watch. He shoots from everywhere and seems to come up with a lot of big shots in the clutch.”

“I’d have to go with LeBron James. He’s one-of-a-kind, and the work he puts in off the court is phenomenal. The bigger the game, the bigger he plays. He’s a special talent.”