Bryan Bickell: “I will never forget that sound"

Bryan Bickell sure knows how to leave a lasting impression. Diagnosed with multiple sclerosis in November, the forward announced his retirement after Carolina’s final regular season game on April 9 - and what a game it was. 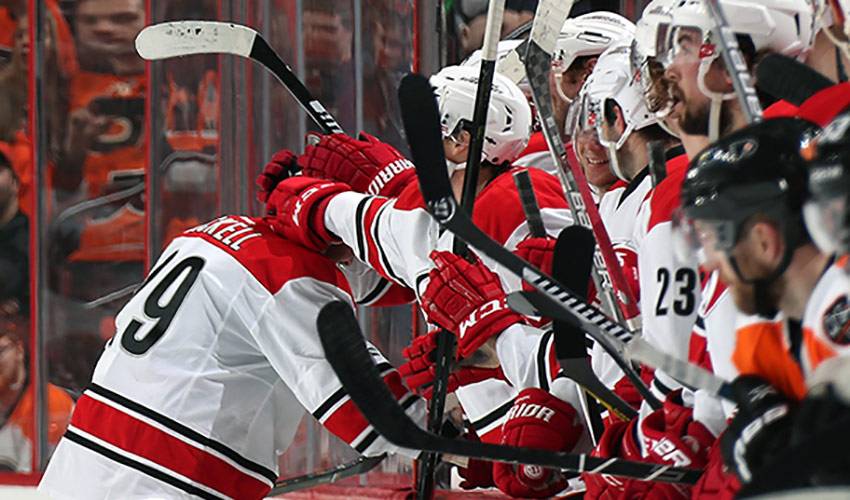 Bryan Bickell sure knows how to leave a lasting impression.

And what a game it was for Bickell.

With friends and family watching from the seats of Wells Fargo Center in Philadelphia, the left-winger played 13:32 minutes, recorded two shots on goal and scored a shootout goal in a 4-3 win over the Flyers.

After his shootout tally rang off the post and in, Bickell was mobbed by his teammates when he came back to the bench.

“I will never forget that sound for the rest of my life,” he told NHLPA.com. “The ‘Canes organization is making me a frame so I can display the puck in my house right beside my replica Stanley Cups.”

What was going through Amanda Bickell’s mind when the red light went on after her husband scored?

Selected 41st overall by Chicago in the 2004 NHL Entry Draft, Bickell, who played four Ontario Hockey League seasons with Ottawa and Windsor, made his NHL debut in 2006-07, scoring two goals in three games with the Blackhawks.

What is Amanda most proud of when it comes to her husband’s big-league career?

“The fact that through all the struggles that comes with being a professional athlete he never gave up and he achieved his ultimate goal of winning the Stanley Cup,” she said. “Either that or the strength that it took him to work hard to get back into the NHL after finding out that he had MS. That's really a tossup for me.”

When Bickell shared his MS diagnosis five months ago, the hockey world was quick to react.

Teammates, players across the league, former players and fans offered their support in various ways.

“I can't thank you enough for the support that you've given me through my career and especially after being diagnosed with MS,” said Bickell, who is, “definitely watching the playoffs.” “I could not have gotten through this without my teammates and fans. There's part of me that pushed through for them.”

And just as he did throughout his career, and in his final NHL game, Bickell took his best shot.

“His willingness to never give up and to always stay positive,” said Amanda, when asked what qualities made her husband a great teammate.

Don’t expect that to ever change.

For more on Bryan and Amanda’s charity work, visit www.bickellfoundation.org.

You’d be hard-pressed to find a better team than Bryan and Amanda Bickell. Bryan’s MS remains a top priority, as does finding ways to help others affected, and of course, the couple found a way to incorporate their passion for pitbull-type dogs.

Gone To The Dogs

Bickell Coming Up Big For Blackhawks

Bickell Fishing For The Top in Chicago