Henrik and Daniel Sedin persevered to elevate themselves among the NHL's most dominant players for nearly a decade. 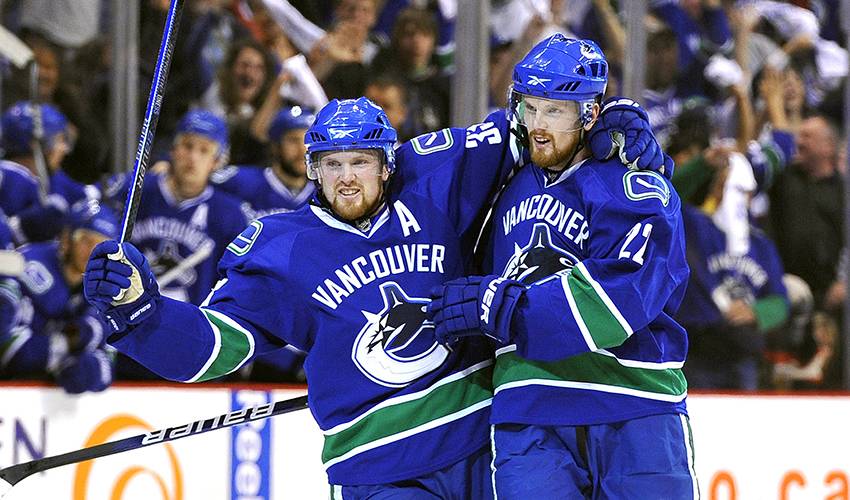 Criticized relentlessly early in their careers with the Vancouver Canucks for being too slow and too soft — among other things — Henrik and Daniel Sedin persevered to elevate themselves among the NHL's most dominant players for nearly a decade.

Quiet and humble on and off the ice, the superstar twins took the same approach with Monday's announcement that they will retire after this season.

"There's been a lot of talk," Henrik Sedin said during a lunchtime press conference at Rogers Arena. "We felt the longer the season went, it became clearer to us this was going to be our last year."

"It's a happy day for all of us," Daniel Sedin added. "We're really comfortable where we're at."

The 37-year-olds released a letter on the team's website earlier in the day before fielding questions from reporters for nearly half an hour.

They relived those tough early times, the high-flying glory days, the crushing defeats, and the last three seasons that have seen the Canucks lose more combined games than any other team in the league.

"It's always tough losing," said Daniel Sedin, who along with his brother will play just three more NHL games. "But with the team we had, you have to stay positive, you have to keep playing the right way, and trying to teach the young guys."

Selected second and third overall at the 1999 draft after the Canucks made a series of trades to grab both players, the Sedins were the face of the franchise for the majority of their careers.

But it wasn't initially a smooth transition from Sweden to North America.

"There's lot of people that believed in us early on that were part of this organization," Henrik Sedin said. "If they would have listened to a lot of voices out of this room, it would have been easy to trade us because we didn't live up to the hype."

The Sedins would eventually do so to become one of the most fearsome duos in the league, with what sometimes seemed like a telepathic ability to find each other with passes.

Their vision often left opponents gasping for air following a dominating shift that ended with another Vancouver goal.

"We'll miss them as people and as players," said Canucks president of hockey operations Trevor Linden, who played six seasons with the Sedins. "Happy for them because I know this is a decision they've come to for the right reasons."

Heading into the final year of their contracts, the Sedins penned another open letter in September stating their desire to remain with the only franchise they've ever known — even if it meant forgoing the chance at a Stanley Cup elsewhere.

"We know we had the best jobs in the world," Henrik Sedin said Monday. "We tried to treat it that way.

They were never able to bring a championship to the West Coast, but led Vancouver to within one game of winning the Cup in 2011.

Despite the bitter disappointment, that ride will stay with them.

"Game 7, Stanley Cup final, you want to pull that off," Henrik Sedin said. "We had a lot of good teams throughout the years here. That year was special.

"Probably the highlight of our careers, but also the lowest point."

Individual accolades, however, weren't a problem.

Henrik Sedin won the Art Ross Trophy as the league's top scorer in 2009-10 with 112 points before also capturing the Hart Trophy as league MVP.

Daniel Sedin then took Art Ross honours in 2010-11 with 104 points and took home the Ted Lindsay Award as the league MVP voted on by the players.

"We hated missing practice and games," Henrik Sedin said. "When they dropped the puck, we wanted to be on the ice. We wanted to be the go-to guys."

The Sedins plan to stay in Vancouver for the time being and are looking forward to spending more time with family.

"Going on the road, leaving the kids home, family, that's been the toughest part," Daniel Sedin said. "It will be fun to be around them a lot more."

Known for their tireless work in the community, the pair have remained committed to the Canucks through a painful rebuild the last three seasons that seems to finally be taking shape.

With players like Brock Boeser and Bo Horvat at the front of a new wave under the leadership of rookie head coach Travis Green, the Sedins feel they're leaving the franchise in good hands.

The Canucks also now have some holes to fill. Daniel Sedin has 21 goals and 31 assists in 78 games this season, while Henrik Sedin has three goals and 45 assists in 79 outings — a combined 100 points Vancouver will have to replace.

"It's the right time for us to leave," Henrik Sedin said. "We've been part of a coaching staff and a group that we really enjoyed working with.

"They're top-notch. We can't say enough good things about Travis."

The Canucks host the Vegas Golden Knights on Tuesday before the Sedins' final home game Thursday against the Arizona Coyotes.

The twins will then wrap up their careers Saturday in Edmonton against the Oilers.

"It's a chance for us to thank the fans," Daniel Sedin said. "We told our teammates this morning they should be regular games. Treat us the same way.

"It should be no different this last week."

That most assuredly won't be the case.