Staal and the Florida Panthers have agreed to terms on a one-year, $750,000 contract. 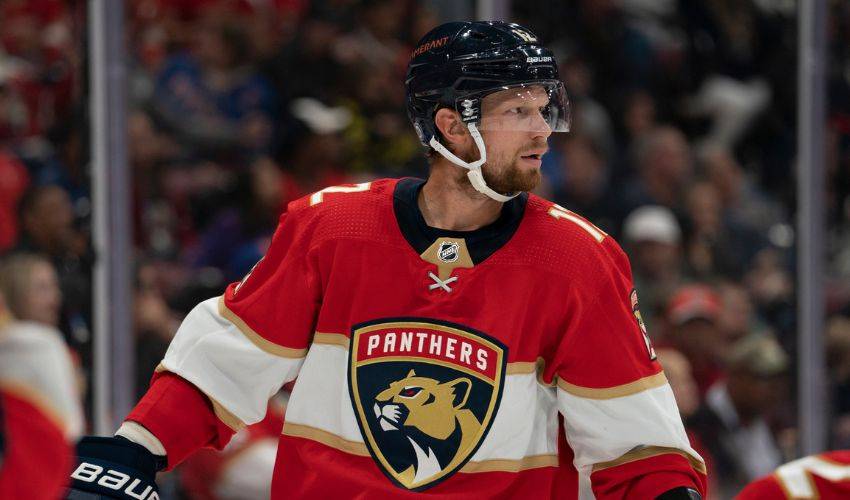 SUNRISE, Fla. (AP) — Veteran forward Eric Staal and the Florida Panthers have agreed to terms on a one-year, $750,000 contract, a deal that makes him a teammate again with his younger brother Marc Staal.

Eric Staal will not play in Florida's game Friday night against the Tampa Bay Lightning, Panthers coach Paul Maurice said. It's the second time that Maurice and Eric Staal have been paired; Maurice coached him for five seasons with the Carolina Hurricanes.

“There's so much to this man ... character, leadership, the love of the game — pure love of the game and the love of the idea of winning — I think he’s great for what's still a relatively young core here," Maurice said. “It's who he is, as a man, how he trains, how he competes, how he practices, how he chirps out there, how he’s just wired right in. It just makes our organization better."

Eric Staal — a member of hockey’s “Triple Gold” club after winning an Olympic gold medal, a world championships gold medal and a Stanley Cup — turns 38 later this month. That puts him on target to be the fourth-oldest skater to appear in a game this season, behind Toronto's Mark Giordano (39), Dallas' Joe Pavelski (38), and the New York Islanders' Zach Parise (38).

Eric Staal had been with Florida since the summer on a player tryout contract, had by all accounts an exceptional training camp — “best shape of his life," Maurice said — and remained skating with the Panthers as a non-rostered player in recent days because the team simply didn't have the cap room to make a move.

But with defenseman Aaron Ekblad on long-term injured reserve and out until mid-November at the earliest, the Panthers found a way to squeeze Eric Staal into the mix.

“All of us, we're excited that he's officially a Panther and we're excited to get going with him," Panthers forward Ryan Lomberg said. “He brings a lot. First and foremost, obviously, leadership. He's a guy who's been around for a while and knows everything about everything."

The move means Florida now officially has three Staal brothers within its organization. Marc Staal is on a one-year deal with the Panthers and Jared Staal, who appeared in two NHL games as a player, is an assistant coach with the Charlotte Checkers — the Panthers’ AHL affiliate.

And this is hardly the first time that a team has found a way to get multiple members of the Staal family on a roster.

Eric Staal and Marc Staal have been NHL teammates once before, playing 22 games together — 17 in the regular season, five in the playoffs — for the New York Rangers at the end of the 2015-16 season.

Eric Staal and Jordan Staal were teammates with the Carolina franchise for parts of four seasons, spanning 2012 through 2016. There have been instances of the Staal brothers playing together for Team Canada as well; Eric and Jordan were together for the team that won gold at the 2007 world championships and competed in the 2013 worlds.

He last appeared in a game on July 7, 2021 for Montreal against Tampa Bay in that season’s Stanley Cup Final.