The Florida Panthers will be without top defenseman Aaron Ekblad until at least mid-November. 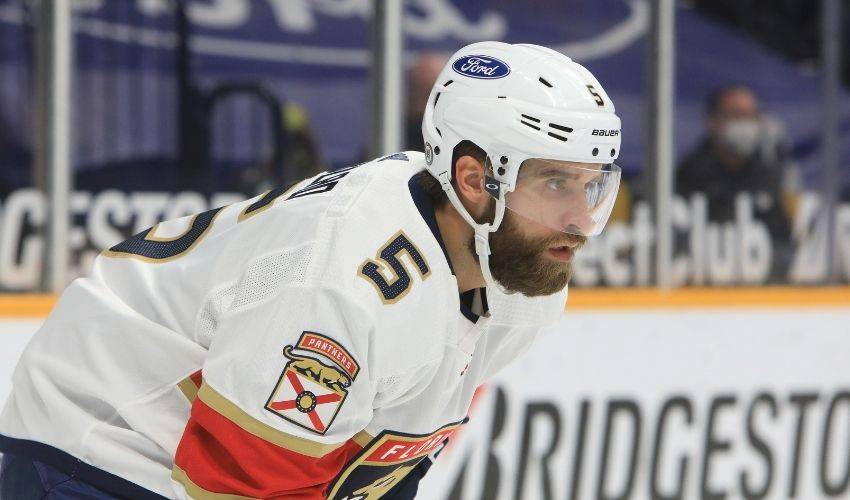 SUNRISE, Fla. — The Florida Panthers will be without top defenseman Aaron Ekblad until at least mid-November, and quite possibly longer, after the team putting him on the long-term injured reserve list with a groin injury.

Players on the LTIR list must miss at least 10 games and 24 days; the Panthers have 11 games in that 24-day window, so Ekblad is out for at least that many. He got hurt in Florida’s loss Monday at Boston.

“We’re not happy about it and obviously we’re concerned for him as a person first,” Panthers general manager Bill Zito said Wednesday. “But he’ll be back. It’s not a season-ending thing. There’s no reason to believe he won’t be back at anything other than 100%.”

Ekblad missed Florida’s final 21 regular-season games last season with a knee issue and 21 games in the pandemic-shortened 2020-21 season season with a lower-leg fracture.

And even without their best defenseman, the Panthers have found ways to win consistently over the last two seasons when he’s not in the lineup. Florida has gone 31-10-1 in the 42 games Ekblad missed over that span. He already is working out in anticipation of his return, Zito said.

“It’s not an ideal situation to lose some of the key players from our team,” captain Aleksander Barkov said. “But at the same time, of course, you have to battle, not just for yourself but for the guy who’s missing. You have to battle for him as well, got to play for him.”

Defenseman Brandon Montour also will miss Wednesday’s game against Philadelphia, the second consecutive contest he’ll sit out because of an upper-body injury. The Panthers believe he can return to practice in the coming days.

The Panthers recalled Matt Kiersted and Lucas Carlsson from their AHL affiliate in Charlotte, and they have veteran forward Eric Staal — who was in camp with Florida on a tryout contract — still skating with the team as a non-roster player. Zito said the the cap-crunched team will try to find a way to add Staal to the roster; his younger brother Marc Staal, a defenseman, is in his first year with the Panthers.

“Every single team in the NHL usually faces significant adversity,” coach Paul Maurice said. “It helps define them. We’re not shying away from this.”