The Sabres are honoring their franchise goalie leader in wins and games played by retiring Ryan Miller’s No. 30 jersey next season. 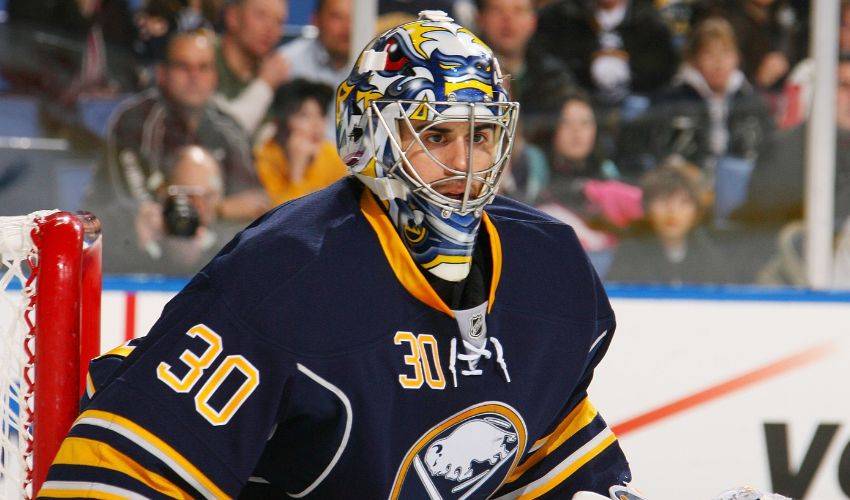 BUFFALO, N.Y. (AP) — It will be Miller Time once more in Buffalo.

The Sabres are honoring their franchise goalie leader in wins and games played by retiring Ryan Miller’s No. 30 jersey next season.

The team made the announcement by releasing a video on Friday which showed Miller being informed of the honor while touring the Sabres' arena with his wife, mother, sister and two children. The announcement coincided with Miller’s trip to Buffalo, where he took part in a news conference to discuss being inducted into the Buffalo Sports Hall of Fame later this year.

Starting in 2002-03, Miller spent his first 10-plus NHL seasons playing for the Sabres. The Michigan State standout was selected by Buffalo in the fifth round of the 1999 draft. He set Buffalo’s record for goalies with 284 wins and 540 games played, before eventually setting the mark for American-born goalies with 391 career wins. He retired after the 2020-21 season.

From East Lansing, Michigan, Miller’s career also featured stops in St. Louis and Vancouver before concluding with a four-year stint with Anaheim.

Miller became a star while leading the Sabres to consecutive Eastern Conference final appearances in 2006 and ’07, with Buffalo losing both times.

His best season was in 2009-10, when Miller won the Vezina Trophy as the NHL’s top goalie and earned Olympic MVP honors for backstopping the United States to a silver medal at the Vancouver Games.

Though he now lives in Southern California, the 41-year-old Miller has considered Buffalo the place where he grew up as a person and player.

The Sabres' video shows Miller on the arena floor standing in front of his former home net with his son, Bodhi. Former play-by-play broadcaster Rick Jeanneret appeared on the video screen to make the announcement.

“Ryan, in five-plus decades, no player has worn the Buffalo Sabres sweater with more authenticity, intensity and pride than you did for 12 unforgettable years,” said Jeanneret, who retired after this season. “Believe me, I’ve seen them all.”

Miller becomes the second Sabres goalie to have his number retired, after Dominik Hasek. Miller wore No. 39 in honor of Hasek at college before switching to No. 30 upon turning pro.

The Sabres will determine what date they’ll honor Miller once the NHL schedule is released.