Hughes, the No. 1 pick overall in the 2019 NHL draft will earn an average salary of $8 million with the new contract. 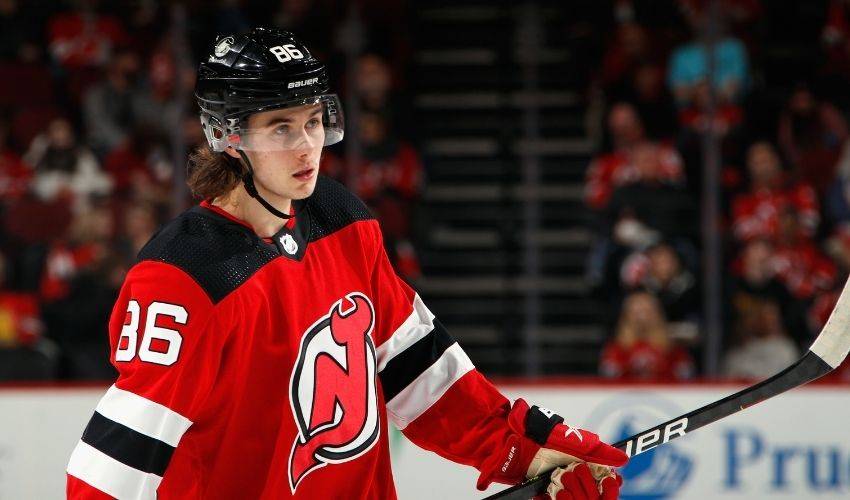 NEWARK, N.J. (AP) — The New Jersey Devils have locked up their best player until the end of the decade, signing center Jack Hughes to an eight-year, $64 million contract extension.

Hughes is returning to the lineup after missing 17 games with a dislocated shoulder.

“It’s a fantastic day for the organization and for our team, and for Jack and his family,” Fitzgerald said shortly before Tuesday night's game in which the Devils fell to the Sharks 5-2. ”It's a win-win."

Hughes, the No. 1 pick overall in the 2019 NHL draft will earn an average salary of $8 million with the new contract.

His salary over the deal will range from $9 million next season and dropping to $7 million in the final two years.

"I mean, obviously frustrating about the game,'' Hughes said after the loss to San Jose, during which he had one shot in 17:31 of ice time. “But aside from the game, really fortunate to be here for eight more years at least and really thankful to David Blitzer, Josh Harris, the ownership group and Tom Fitzgerald. Really thankful and when I step back away from the game, it’s a really exciting day for my family and myself."

Blitzer said the franchise is committed to the smooth-skating Hughes.

“We all know what Jack means to the team on and off the ice -- he’s an unbelievable player and a fantastic person,” Blitzer said. “His future is incredibly bright and he will be a pillar for our franchise for years to come.”

The one thing the 20-year-old Hughes has not done is register a lot of points. That might be the byproduct of playing on weak teams. Fitzgerald added that Hughes' style of play is to be admired and followed by his teammates.

Hughes has two goals and one assist in three games this year. In his first two seasons, along with the two games played this year, he has 55 points (20 goals, 35 assists) in 119 NHL games.

Hughes added that he is excited to be part of the team's maturing core.

“It’s good for our fans; they look at us and they see a young, promising team,'' he said. "We’re all pretty competitive guys in the locker room.”

Hughes finished second on the Devils in points last season, and led the club with 142 shots on goal. He was the only forward who played in all 56 games.

Hughes represented the United States twice at the world juniors in 2018 and 2019.

“He’s a great player and we think he can be one of the elite players in the league,'' Fitzgerald added. ”As he grows and develops and matures as a player, the sky’s the limit.”

Hughes' younger brother, Luke, was New Jersey’s first-round selection, and the fourth overall in the 2021 NHL draft. The defenseman is currently playing at Michigan. His older brother, Quinn, is a defenseman for the Vancouver Canucks.

“He’s a tremendous competitor, a great kid,'' Devils coach Lindy Ruff added about his star forward. ”He’s got this attitude that it’s never say die and he always wants to be out there."