Owen Power was seated outside his aunt's house in Burlington, Ont. when he heard his name called first in the NHL entry draft. 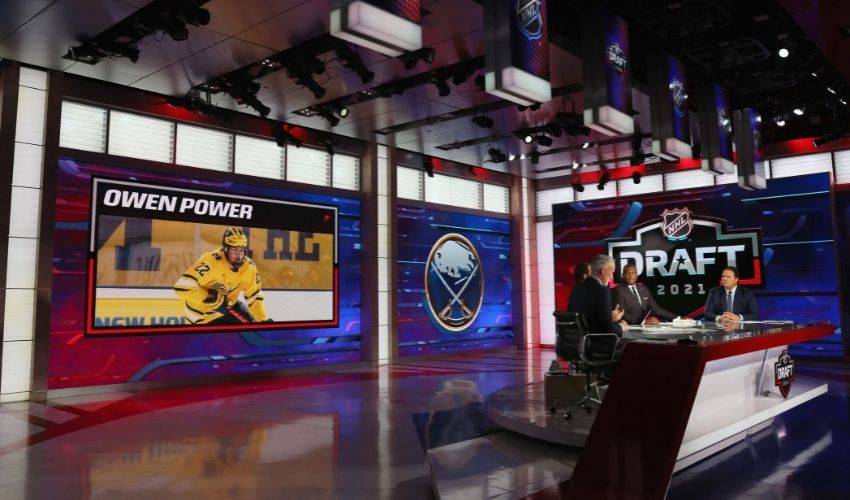 Instead of a packed arena, Owen Power was seated outside his aunt's house in Burlington, Ont., Friday night when he heard his name called first in the NHL entry draft.

The six-foot-six, 213-pound defenceman from Missisauga, Ont., smiled as the Buffalo Sabres picked him No. 1 overall, then hugged several family and friends in the throng assembled behind him before replacing his suit jacket with a blue Sabres jersey.

“I think it’s pretty special, just being able to have a bunch of my family behind me and kind of celebrate with me," he said on a video call Friday, the sounds of about 60 family members, friends and former coaches wafting in behind him. "I think it was pretty special and even better than the way I thought it would turn out.”

Power came into the draft the No. 1-ranked North American skater after 16 points (three goals, 13 assists) in 26 games at the University of Michigan last season. He then turned heads as part of the Canadian national team that won gold at the world men's hockey championships in May.

He'd had a good call with the Sabres earlier this month and "felt comfortable" with the team, but Power didn't assume he'd be Buffalo's pick.

“I didn’t know until they called my name. I was kind of hoping," he said.

“They’ve got a lot of young prospects and a promising future. So I’m excited for what’s to come.”

Mason McTavish, a centre from the Ontario Hockey League's Peterborough Petes, was selected third by the Anaheim Ducks.

The No. 4 pick was a family affair with the New Jersey Devils taking defenceman Luke Hughes. He'll eventually join his older brother, Jack, who was selected first overall by the Devils in 2019, but the younger Hughes has committed to playing at the University of Michigan in the fall.

Kent Johnson, a centre from Port Moody, B.C., was taken fifth by the Columbus Blue Jackets. He, too, played at Michigan, making four of Friday's top-five picks Wolverines.

For Power, seeing so many teammates selected at the top of the draft was "pretty cool."

“It was pretty special. I know all of those guys real well, so seeing them go right after, it was really cool to see and I’m super excited for those guys," he said, adding that the crew created a group chat earlier in the day to discuss possible scenarios.

"I think all of us kind of hoped it would turn out something like this so for it to turn out like this, it’s pretty special."

The Montreal Canadiens were the last Canadian-based team to make a first-round pick Friday, but made the loudest noise with their selection.

The Canadiens made a controversial choice with the No. 31 pick, selecting  Logan Mailloux despite the defenceman posting a statement on social media earlier this week asking teams not to draft him after news surfaced that he had been charged and paid a fine in Sweden for distributing a sexual photo without consent.

Mailloux, who will play next season for the Ontario Hockey League's London Knights, spent last season on loan to SK Lejon in Sweden’s third division.

The Canadiens put out a statement shortly after announcing Mailloux as their pick.

"By drafting prospect Logan Mailloux with the 31st overall pick, the Montreal Canadiens organization not only selected a promising hockey player, but also a young man who recently admitted to making a serious mistake. The Canadiens are aware of the situation and by no means minimize the severity of Logan's actions. Logan understands the impact of his actions. His recent public statement is a genuine acknowledgment of his poor behaviour and the first step on his personal journey," read the statement.

"We are making a commitment to accompany Logan on his journey by providing him with the tools to mature and the necessary support to guide him in his development. We are also committed to raising awareness among our players about the repercussions of their actions on the lives of others."

The Vancouver Canucks were scheduled to be the first Canadian team on the board but earlier in the day sent the No. 9 pick to the Arizona Coyotes in a blockbuster trade.

The Ottawa Senators took right-winger Tyler Boucher with the No. 10 pick, centre Chaz Lucius was selected 18th overall by the Winnipeg Jets, and the Edmonton Oilers used the No. 20 pick on centre Xavier Bourgault.

The six-foot-one, 205-pound Boucher — the son of former NHL goalie Brian Boucher — spent last season with the U.S. National Team Development Program, where he put up 11 points (six goals, five assists) in 12 games for the under-18 squad. He is currently committed to Boston University for the upcoming season.

The six-foot-one, 185-pound Lucius also hails from the U.S. National Team Development Program, where he tallied 20 points (13 goals, 7 assists) in 13 games after recovering from a knee injury last season. He is set to play at the University of Minnesota next fall.

The six-foot, 172-pound Bourgault had 40 points (20 goals, 20 assists) in 29 games for the Shawinigan Cataractes of the Quebec Major Junior Hockey League last season.

The Toronto Maple Leafs dealt their first-round selection to the Columbus Blue Jackets in April for forward Nick Foligno and won't pick until midway through the second-round (No. 57 overall) on Saturday.

The draft is being held virtually for the second year in a row.

Commissioner Gary Bettman said Friday that the league plans to hold the 2022 draft at the Bell Centre in Montreal. The site was set to host the 2020 event before it was rescheduled to to the COVID-19 pandemic.

This report by The Canadian Press was first published July 23, 2021.