Mark Scheifele scored twice and Mason Appleton added a goal for the Jets, who eliminated the Oilers for the first time in history. 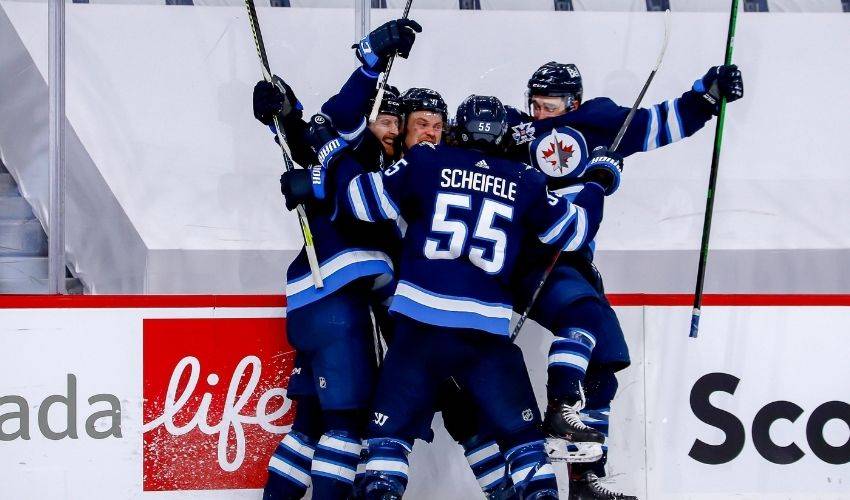 WINNIPEG — During period intermissions of the longest night in franchise history, the Winnipeg Jets cracked jokes, they chugged water, and snacked on bananas and energy bars.

But the significance of the game was always front of mind.

Connor did just that, scoring in triple overtime to lift the Jets to a 4-3 victory over the Oilers on Monday, ending Edmonton's playoff run. The win gave the Jets a 4-0 sweep of the best-of-seven first-round series.

Mark Scheifele scored twice and Mason Appleton added a goal for the Jets, who eliminated the Oilers for the first time in history.

It took a marathon game to do it, with Connor mercifully ending the deadlockon a breakaway at 6:52 into the third OT.

"It was our mentality the whole overtime to just get pucks on net," Connor said. "So shot that one and yeah, that one feels pretty good."

Winnipeg will face the winner of the other North Division series between Toronto and Montreal. The Maple Leafs took a 2-1 lead earlier Monday with a 2-1 victory.

The Jets will need the rest after three straight overtime games, including two on back-to-back nights. Monday's lengthy affair had weary players gasping for air when they headed to the bench.

Few predicted the Jets would topple Edmonton, let alone sweep the series. What was the key to the series?

"It took all pieces of our game," Maurice said. "I think the idea going into the series was that the regular season was a tell somehow, and I didn't feel that way. I think (Edmonton) is a very, very good team ... (with) the two best offensive players in the world (in McDavid and Leon Draisaitl). In a bunch of those games, it was very, very close. And much like the series, right? They're all one goal games. And there was a piece to our game that got better in each one of those."

It was a shockingly swift exit for the Oilers, who had high hopes for the post-season after finishing second in the North Division ahead of third-place Winnipeg, and took the regular-season series versus the Jets 7-2.

Instead, the stunned Oilers, who haven't won a playoff series since 2017 (versus San Jose), saw their playoff dreams extinguished in just six days.

"I give our players credit, they battled hard," said Oilers coach Dave Tippett. "That's not an easy game. We didn't get the result we wanted last night, you come in here and we've got to play a back-to-back. We had a lot of players play very well. It's just disappointing we couldn't get the win."

The Jets struck first Monday on a power-play goal by Scheifele at 6:16 of the first period on a tick-tac-toe play.

Just a minute and 17 seconds later, McDavid, the NHL's leading scorer in the regular season, finally found the back of the net with his first goal of the series, scoring on a wraparound after a give-and-go with Draisaitl.

The Jets regained the lead off Appleton's beautiful deflection of a Josh Morrissey shot at 15:55 of the first.

Nugent-Hopkins tied it up again at 3:44 of the second for his first points of the series, scoring with a back-hander into the top corner.

The Oilers punished the Jets on a power play for their first lead of the game at 16:37 of the second. Chiasson patiently held onto a rebound then poked the puck past Hellebuyck to make it 3-2. The normally reserved McDavid threw his hands in the air in delight.

Edmonton's joy was short-lived, as Scheifele connected for his second of the night, a slap shot at 6:01 of the third that sent the game to overtime for the third straight night.

"I think we're a group that expects more from ourselves, we're a group that we want to push and continue to grow," McDavid said. "And obviously we didn't do that in the playoffs. We're still sour. I don’t think anyone's going to deny that."

Wheeler took a shot in the groin late in the third, and headed straight to the locker-room bent over in pain. He was back on the ice for overtime.

"I've got three beautiful kids, we're not having any more, so what the hell," Wheeler said with a laugh.

It was the Jets' first series win since 2018, when they dispatched Minnesota in five games, then Nashville in seven before losing to the Vegas Golden Knights in the conference finals.

Because of COVID-19, the game was held without fans at Bell MTS Centre, an unfortunate fact Jets players lamented after the previous night's thrilling win. But while no spectators were permitted inside, an endless line of cars, flags flying, horns honking, paraded down Portage Ave., past the arena before the game.

Only a night earlier, the Jets completed one of the craziest comebacks in NHL history.

Sparked by Josh Archibald's tripping penalty on Logan Stanley, Mathieu Perreault scored on the ensuing power play, and opened the floodgates. The Jets scored three goals in three minutes and three seconds, and clinched the win in overtime.

Winnipeg became just the 10th team in NHL history to come back from three goals down in the final 10 minutes of the third period in the post-season.

Archibald was given a one-game suspension and missed Monday's game.

This was the first post-season series between the two teams since 1990, when Edmonton ousted the Jets in seven games in the Smythe Division semifinals.

This report by The Canadian Press was first published May 24, 2021.