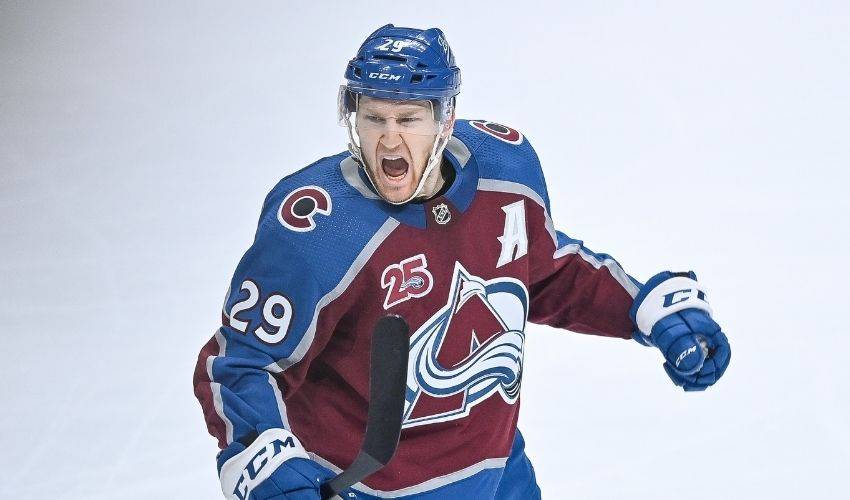 That's no line, either. Just a tribute to his linemates.

The trio of Landeskog, speedy center Nathan MacKinnon and sharpshooting right winger Mikko Rantanen combined for nine goals and 15 assists during a four-game sweep of St. Louis in the opening round. It's the third best-of-seven series sweep in franchise history, with the other two times — 1996 and ’01 — culminating with hoisting the Stanley Cup trophy.

And while that particular finish line remains a distance off, the bottom line remains this: The Avs are the odds-on favorites to get there in large part due to that top group.

“Both (MacKinnon) and Mikko have very high, high skill and are top talents in the league,” said Landeskog, whose team will face either Vegas or Minnesota in the next round. “Not only that but they work really hard. We’re trying to constantly work on our game and study each other and learn from each other. It’s definitely fun playing with those two guys.”

The chemistry didn't happen overnight. The three were allowed to go through their ups and downs, slumps and streaks without fear of a breakup. That's an assist to Jared Bednar: Landeskog said the Avs coach never wavered, even if he did sometimes separate them in an effort to provide a spark on other lines.

They rewarded that faith this season with 70 goals and 113 assists as Colorado won the Presidents’ Trophy with the best record in the NHL to guarantee home-ice advantage throughout their postseason run.

“It comes from being patient from a coaching staff’s perspective and letting us play together and letting us find that chemistry and work on it, and trusting us to be that top line,” Landeskog said. “All three of us want to be a difference maker and want to drive our team, drive the play.”

They were certainly a handful for the Blues. MacKinnon led the way with six goals and three assists, while Landeskog added two goals and six assists. Rantanen chipped in six assists along with his lone goal in Game 4, which was a big sigh of relief after coming so close all series.

“It’s always nice to score,” said Rantanen, who led the Avalanche in goals (30) and points (66) during the regular season. “That’s what everybody loves after winning.”

The 24-year-old Rantanen has been highly dependable in the postseason, logging at least a point in 14 straight playoff games.

“He’s always been so good and this year he’s especially been amazing,” teammate Tyson Jost said. “He’s a little bit underrated in that sense, where he doesn’t get as much credit as he deserves.”

That’s because he happens to play on the same line as MacKinnon, who has 63 points in 44 career playoff games for a 1.43 points-per-game average. It’s the fourth-highest mark in NHL postseason history (minimum 25 games), trailing only Wayne Gretzky (1.84), Mario Lemieux (1.61) and Barry Pederson (1.53).

“I don’t know if I’m at another level or pucks are going in right now,” said the 25-year-old MacKinnon, who had a career-high, 15-game point streak this season. “I mean, all my goals are with great screens in front. Landy, Mikko are beasts down low.”

Landeskog only smiled when asked about being MacKinnon's wingman on the ice.

“Being Nate’s wingman ... it’s definitely one of the best jobs in hockey,” cracked Landeskog, who at 28 is in his ninth season as team captain.

Landeskog is the grinder of the group and not afraid to mix it up. He recorded a “Gordie Howe” hat trick in Game 1, with a goal, assist and a fighting major penalty. It was the first one in Avalanche postseason history since Mike Ricci in 1997 against Chicago.

Landeskog dropping the gloves and throwing punches — he was sticking up for Rantanen after a hit — fired up the team.

All part of his job on a top line with his two buddies.

“It’s been fun to getting to know these two guys over the last few years as players and obviously as people,” Landeskog said. “Hopefully we can continue to get better and better as we go on.”