'We're playing for him': Maple Leafs look to regroup minus injured Tavares

The club says Tavares will be out indefinitely. 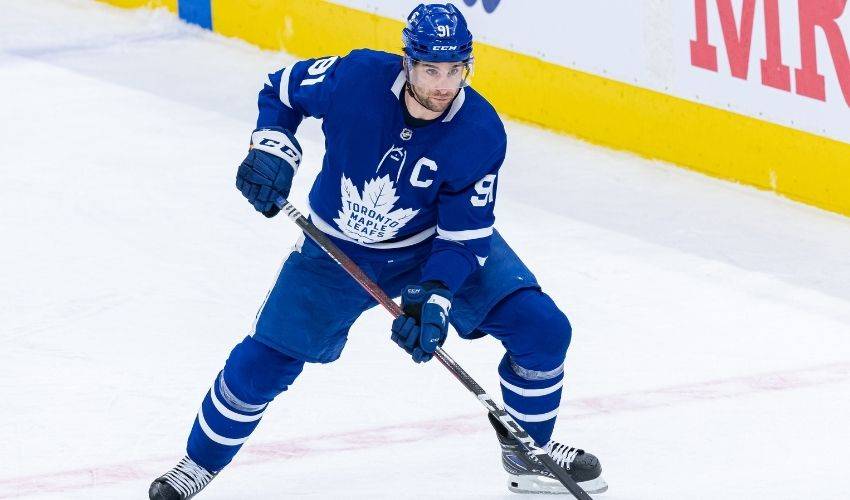 TORONTO — The Maple Leafs were unable to overcome Nazem Kadri suspensions in both the 2018 and 2019 playoffs.

Now minus captain John Tavares following a scary collision 10 minutes into a mouth-watering Original Six matchup, Toronto is already facing another mountain of adversity in the spring of 2021.

And the Leafs know it's up to them — and them alone — to change the narrative.

"Hockey is not a one-man show," head coach Sheldon Keefe said following Friday's brief practice session. "Others need to step up. It's as simple as that.

"We've got to rally around this situation."

Tavares was stretchered off inside an eerily quiet, fan-less Scotiabank Arena in the first period of Toronto's 2-1 loss to Montreal in Game 1 on Thursday after taking an accidental knee to the face from Canadiens winger Corey Perry.

The blood-stained veteran centre, who suffered a concussion and tried to get to his skates as medical personnel from both teams scrambled to offer assistance, spent the night in hospital, but was discharged Friday morning.

Relieved to learn Tavares is on the mend, the attention shifted to what Toronto now faces without its leader and No. 3 scorer behind Mitch Marner and Auston Matthews.

"It's a very unfortunate predicament," Keefe added. "Losing your captain, it's not what you want when you're going into a playoff run where you've got high expectations."

Those expectations for the North Division's No. 1 seed also come with a feeling of dread peppered amongst a fan base disappointed time and again by a team that's failed to win a playoff round since 2004 and owns a 54-year Stanley Cup drought.

"We knew that during this playoff journey it wasn't always going to be easy," defenceman Morgan Rielly said. "Nobody wants to win more than the people in this room."

Kadri's back-to-back suspensions cost the Leafs dearly in consecutive series against Boston Bruins, while they were unable to recover after Muzzin was hospitalized in the wake of another awkward collision against the Columbus Blue Jackets in last summer's qualifying round.

Leafs forward Jason Spezza was speaking with Tavares on the ice in the immediate aftermath of the injury in an attempt to calm his friend and teammate.

"There's a pit in your stomach," Spezza said. "It's sickening to see somebody lie on the ice like that. And especially John. He's so dialled in and in control.

"To see him be in a state like that really makes you sick to your stomach."

Tavares, who reached out to teammates by text and phone, released a statement Friday thanking doctors, the Leafs and their fans for the support.

Spezza said he chatted with Tavares after the game, and added the 30-year-old wanted make sure Toronto is focused on the task at hand.

"Speaks to his character," Spezza said. "He's the guy in the hospital, and he's worried about us."

"We're playing for him," added Rielly.

The Leafs, meanwhile, need to worry about finding a way past Carey Price in Saturday's Game 2 of the best-of-seven showdown — the storied franchises' first playoff meeting since 1979.

Matthews hit the post and had eight of the Leafs' 36 shots Thursday, while William Nylander, who scored the Leafs' only goal, also found iron. A power play that struggled mightily most of the second half of the pandemic-shortened schedule failed to capitalize, but still had a number of good looks.

"You can't win a series in one game," Matthews said. "We just want to stay the course."

Keefe said it's not surprising Price — a future Hall of Famer — elevated his performance after playing just two periods in the minors over the previous month as he worked his way back from a concussion.

"A goalie like Carey Price, it seems like the big moments are the ones that they wait for," said the coach. "That's what we had expected and that's what he was.

"He was sharp, but we've got to do a lot more to make it more difficult on him and find ways to give ourselves more opportunities."

The Leafs moved around some chess pieces at practice with Tavares out, sliding Nick Foligno into the middle on the second line between Nylander and Alex Galchenyuk, who will draw in along with Pierre Engvall. Defensive centre Riley Nash is the odd man out, while starting goalie Jack Campbell was given a maintenance day.

"The dynamics of our group change when John's not in," Keefe said. "I just felt we have to make some changes to compensate for that, and give us a little bit more of a push offensively and a greater depth throughout the skill and speed department."

The Leafs know they'll be without Tavares for some time.

And if he's going to suit up again in these playoffs — it's unclear if that's even a possibility at this point — they'll have to go on a run not seen in Toronto at any point during the NHL's salary cap era.

"We know John wants us to move on and get ready," Spezza said. "We want to win hockey games so we can get him back in the lineup. He's a big contributor, and the only way that can happen is by winning.

"That's what John wants us to do."

This report by The Canadian Press was first published May 21, 2021.