Edmonton Oilers goaltender Mike Smith is a 39-year-old veteran aspiring to hoist the Cup before the end of his career. 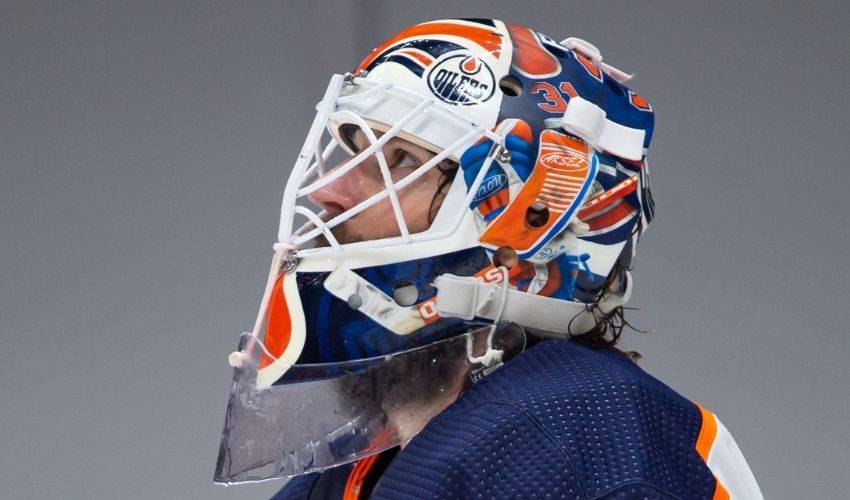 EDMONTON — A shot at a Stanley Cup late in an NHL career is something to savour.

Edmonton Oilers goaltender Mike Smith is a 39-year-old veteran aspiring to hoist the Cup before the end of his career.

He's aware of the chance in front of him when the Oilers open the post-season Wednesday against the Winnipeg Jets.

Smith isn't the oldest goaltender in this year's NHL playoffs.

Craig Anderson, who turns 40 on Friday, backstopped the Washington Capitals to a 1-1 record to open their series against the Boston Bruins.

Smith has played 16 NHL seasons and started 618 games. He has made 23 career playoff starts.

"I remember as 24-year-old being in my first year in the league and guys telling me 'it goes by quick.' You're thinking 'OK, old goat. I've got a lot of time left,'" Smith said recently.

"Now I'm the old goat and I'm trying to say the same things to these young players.

"Seasons go by so quickly and chances to win are few and far between it seems like in my situation anyways.

"It just doesn't come around as often as you think or as easy as you think to get to the playoffs for one, but make some noise when you're there."

"The one thing I love about Smitty is his attitude every day," the Oilers forward said. "He has one mindset and he wants to win. He brings a lot of energy to our group. He just loves the game.

"It's a good reminder for ourselves and for myself personally not to take any day at the rink for granted. You want to appreciate playing in the NHL. He's the best example of that."

Smith's 21-6-2 record, a goals-against average of 2.31 and a save percentage of .923 this season makes the six-foot-five goalie from Kingston, Ont., the Game 1 starter for Edmonton again.

There's less suspense around that question than there was last summer in the NHL playoff bubble in Edmonton.

Smith and Mikko Koskinen had split net duties fairly evenly during the regular season, but the former got the nod from head coach Dave Tippett.

It didn't go well for Smith. He was pulled when the Chicago Blackhawks scored five times on 23 shots on him in a 6-4 win.

Koskinen played the rest of qualifying series in which the host Oilers were eliminated in five games.

"Everyone wants to talk about the one game I played in the bubble," Smith said. "Last year was a unique situation where I left my family behind. Not sure how long I was going to be away from them.

"I'm not concerned on how this is going to go. I'm not comparing it at all to last year's situation. Last year was a layoff, and we got back, and it was just a unique situation.

"Probably one I didn't handle very well. You learn from those situations over the course of your career."

Smith wasn't coveted by other clubs in last October's hot market for free-agent goaltenders. He signed a one-year contract extension with Edmonton for less money.

"He came back very motivated, had lots to prove and he's come in and played very well," Tippett said.

"He's an ultra-competitive guy, loves situations where you can play on a bigger stage and has earned the right to this year."

One of the most adept puck-handling goaltenders in the NHL and one of a handful to actually score a goal shooting in the puck from the other end of the ice, Smith's fierceness infuses his net demeanour.

In his first playoff appearance in seven years, Smith was the Calgary Flames' best and most competitive player in a quick five-game exit in 2019.

His fight with Flames goalie Cam Talbot the following season after Smith became an Oiler is an example of his fieriness.

"Smitty, he's an incredible guy," Oilers defenceman Tyson Barrie said. "I think just his passion he brings to every game is pretty infectious.

"He's kind of the one to point us in the right direction when we're maybe not doing it ourselves. He's a big part of the leadership and a big voice in our room."

A fifth-round pick of the Dallas Stars in the 2001 draft, Smith didn't make his NHL debut until 2006-07. He says his three playoff starts for the Tampa Bay Lightning in 2011 "kind of resurrected my career."

He backstopped the Phoenix Coyotes to the Western Conference final the following year. The Coyotes bowed out to the eventual Stanley Cup champion Los Angeles Kings in five games.

"The first year I went to Arizona I was able to play the majority of the games there in playoffs and really get a good feel of what it's like to be that close to your childhood dream," Smith said. "There's nothing like it."

With the goal support NHL leading scorers Connor McDavid and Leon Draisaitl can provide for the Oilers, Smith anticipates having that feeling again, and perhaps achieving that childhood dream.

"I definitely feel there's a confidence amongst our group that we can beat any team," Smith said. "We can play in close games and we can be down and come back, and we have the firepower to to that."

This report by The Canadian Press was first published May 18, 2021.

Mike Smith’s first All-Star appearance included a laid-back skate with his kids, a Hollywood-inspired goalie mask, and a have-to-see-it-to-believe-it moment during the skills competition.