Sabres' Eichel ruled out for rest of season with neck injury

Buffalo Sabres captain Jack Eichel won't play the rest of the season because of a neck injury. 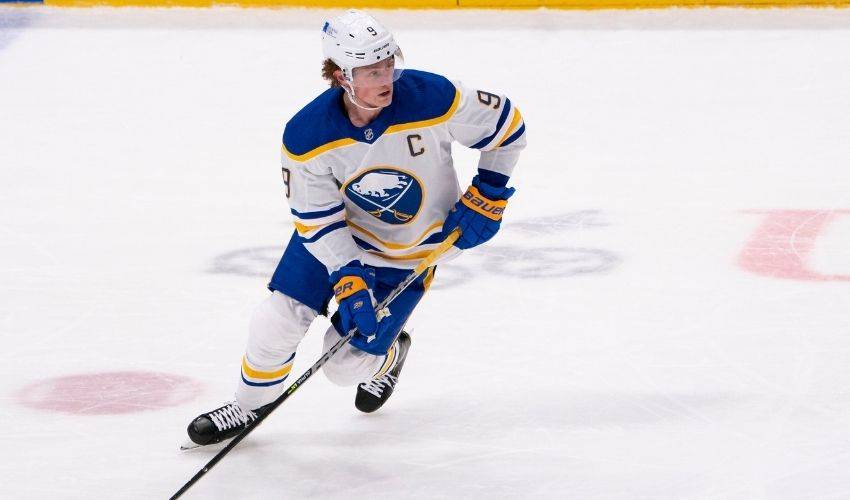 Buffalo Sabres captain Jack Eichel won't play the rest of the season because of a neck injury.

The team said Wednesday that Eichel has a herniated disk and is expected to be healthy for the start of next season. The 24-year-old hasn’t played since March 7.

“He (was) playing through it,” interim coach Don Granato said after practice. “It’s not something you want exposed, obviously, because it's such a competitive environment, so that’s information you don't want the opponents to have, obviously, for his safety. It’s a bummer."

Granato said he didn't know if Eichel would need surgery, adding, “You hope for him to feel better every day and improve every day.”

Eichel had 18 points in 21 games before coming out of Buffalo’s lineup. The 2015 No. 2 pick and face of the beleaguered franchise is three seasons into an $80 million, eight-year contract that runs until 2026.

The Sabres have lost 32 of 42 games this season and are in last place in the NHL. They’ve started to turn things around since Granato took over for fired coach Ralph Krueger and are 4-2-2 in their past eight games.

General manager Kevyn Adams hinted at a long-term absence for Eichel on Monday, saying “it does look like he’s still going to be out for a while."

“I think part of this for Jack has been to make sure that the reason he’s not playing is because he’s not healthy enough to play,” Adams said. "We need to help him, do everything we can as an organization, to get him back there.

“It's tough,” teammate Sam Reinhart said of Eichel's injury. “You just hope he recovers and comes back better from it.”

Eichel has 139 goals and 216 assists for 355 points in 375 regular-season games for Buffalo, which is well on its way to missing the playoffs for the 10th consecutive year.

Granato didn't have any updates on injured goaltenders Linus Ullmark and Carter Hutton. Ullmark left the Sabres' game Monday night at Boston with an undisclosed injury and was replaced by Dustin Tokarski.