Evgeni Malkin scored on a power play for his 1,100th career point and the Pittsburgh Penguins beat the Boston Bruins 4-1 on Monday night. 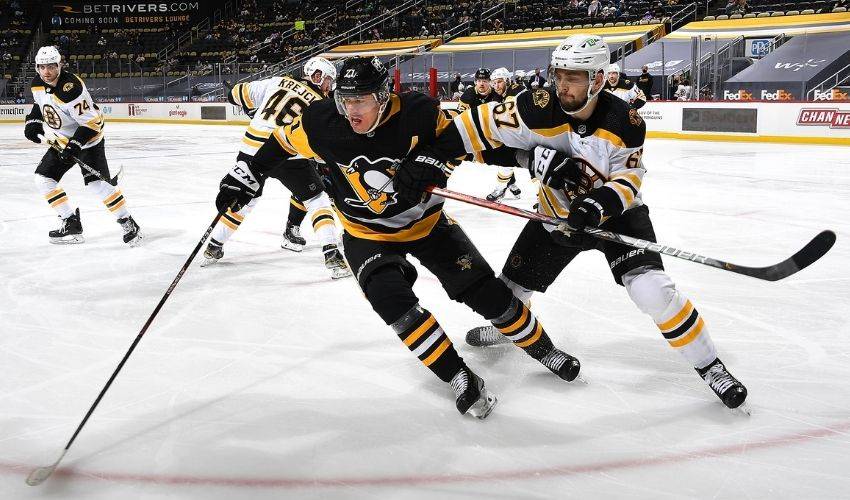 PITTSBURGH — Evgeni Malkin scored on a power play for his 1,100th career point and the Pittsburgh Penguins beat the Boston Bruins 4-1 on Monday night.

Malkin is the third Russian-born player to reach 1,100 points in the NHL, joining Alex Ovechkin and Sergei Fedorov. Malkin has eight goals this season and also had an assist on Monday while extending his points streak to eight games.

“I think Geno is a guy who relies so heavily on his confidence level, and he puts a lot of pressure on himself to produce offensively for our team,” Penguins coach Mike Sullivan said. “When a few pucks go in the net, and he’s getting opportunities to score, you can see his confidence build and usually his game follows.”

Tristan Jarry made a season-high 42 saves for Pittsburgh, Sidney Crosby scored his 11th goal of the season and had two assists, and Jake Guentzel also scored his 11th — including four in the past four games. Evan Rodrigues also scored for the Penguins, who won their sixth straight game.

Matt Grzelcyk scored a power-play goal for the Bruins, who have four wins in their last 13 games. Boston started the season winning five of six on the road, but it has just one win in its past six away from home.

“In a game like tonight, we had almost 50 shots,” Bruins forward Brad Marchand said. “It does feel like every mistake is going in our net, but that just means we have to clean up our game a little bit.”

Jaroslav Halak made 22 saves in his fourth straight start. Bruins’ No. 1 goaltender Tuukka Rask with the team and was on the ice following Monday’s morning skate, but he’s not expected to play on Tuesday. Rask has missed the last four games with an undisclosed injury.

Pittsburgh led 2-1 when Malkin scored at 11:40 of the second period. He took a cross-ice pass from Crosby and beat Halak with a glove-side wrist shot.

“That was a huge goal for us during the course of the game,” Sullivan said.

Grzelcyk opened the scoring for Boston with a power-play goal at 6:47 of the first period, but Pittsburgh took a 2-1 lead with two late first-period goals scored 1:43 apart.

Rodrigues tied it at 16:51 and Crosby put Pittsburgh in front at 18:34 of the first period. The Penguins’ captain took a pass from Guentzel and scored on a sharp-angle one-timer from the goal-line that squeezed between Halak’s glove and the post.

Malkin became the 64th player with 1,100 points. He’s the fifth active in the league and third in team history to hit the mark, following Hall of Fame team owner Mario Lemieux and Crosby. Malkin, in his 935th game, became the 18th-fastest player to accomplish the feat.

“When he’s going like that, there’s not much you can do to stop him,” Crosby said. “The way he’s carrying the puck, he’s really confident.”

The Bruins continued to struggle offensively. Boston finished with 43 shots, including 20 in the first period, but only one goal. David Pastrnak had a chance to make it a one-goal game in the third period, but he whiffed on an open net during a power play.

The Bruins have scored 31 goals in the last 13 contests and 20 in the previous 10 games. Boston went six games recently allowing one goal or fewer, which tied for the second-longest stretch in team history and was one game shy of the club mark, set in the 1928-29 season.

“They generated enough to win the hockey game. You have to finish,” Bruins coach Bruce Cassidy said. “I’m more concerned when you don’t generate. If we continue to generate, I believe there’s enough talent to score goals.”

CROSBY WITH THE ASSIST

Crosby became the 22nd player with 200 or more games with multiple assists, moving him into a tie with Doug Gilmour and Bobby Clarke for the 20th-most multi-assist games in NHL history.

He has four goals and 11 points in his last seven games.

The Penguins and Bruins meet again on Tuesday in Pittsburgh. The Penguins are in the midst of a stretch in which they will play five games in seven days. The Bruins are on a four-game road trip before a five-game homestand.