William Nylander was in uncharted territory around this time last season. 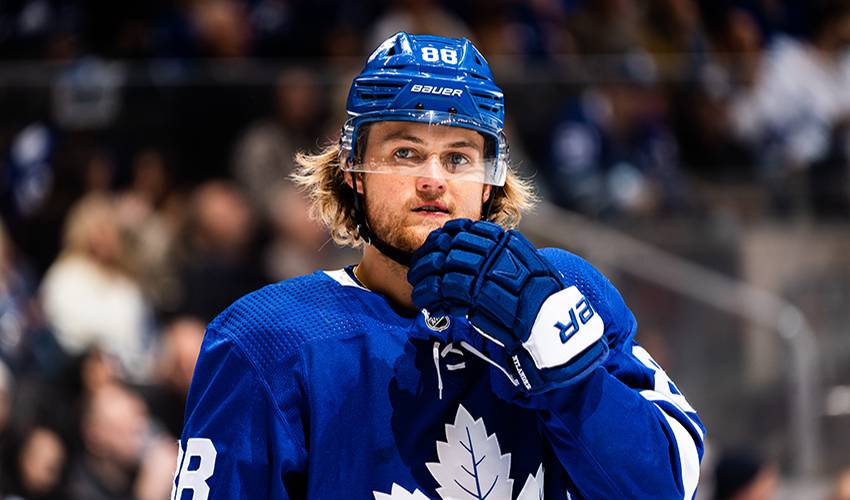 TORONTO — William Nylander was in uncharted territory around this time last season.

And not in a good way.

His contract impasse with the Toronto Maples finally came to a conclusion when he put pen to paper on a big-money deal minutes before an early December deadline. But despite doing his best to stay in shape on his own time, Nylander was in the rest of the field's rear-view mirror in terms of conditioning and feel after missing training camp and the first two months of the season.

It took until Game 20 to register his fourth point on Jan. 20, 2019, and there were near-immediate rumblings from fans and media alike that the Leafs — facing an impending salary cap crunch — had vastly overpaid a player set to make nearly US$7 million annually through 2023-24.

Nylander remained his usual quiet, confident self, but the lack of production still weighed on him.

A 61-point man in each of his first two full NHL campaigns, the Swede finished with just seven goals and 27 points in 54 games, good for a 41-point pace.

While there were stretches where Nylander started to feel good about himself last season, things finally started to turn at the world championships after Toronto was eliminated by Boston in the first round of the playoffs for the second consecutive spring.

He led the tournament with five goals and 18 points, got back to work over summer and declared in September he intended to "dominate" in 2019-20.

Thus far, Nylander's been a man of his word.

Heading into Saturday's home game against Ottawa, he has 24 goals and 46 points in 51 games. He's found the back of the net in five straight contests, has eight points in his last six outings, and is on an 85-point pace (16 goals, 13 assists in 28 games) since Sheldon Keefe took over for Mike Babcock as head coach on Nov. 20.

"This is what we paid for," Leafs general manager Kyle Dubas said back in December.

"Coming in halfway through the year when you haven't played a hockey game in six months ... it's not easy," Matthews said. "Everybody's thrilled with the way he's been competing every night. He's big part of this team."

Keefe willingness to up the minutes of his young stars — Nylander, Matthews and Mitch Marner — has led to more opportunity. Nylander was promoted to the top power-play unit, but the trio has also been encouraged to take risks, something that wasn't the case under the old regime.

"That's important when you get in certain situations," Nylander said. "As long as you're not getting scored on it's good that you're able to try stuff."

There was, and still is in many cases, a narrative that the 23-year-old's unwilling or unable to get to the dirty areas of the ice — a so-called "perimeter player" — where most goals are scored in today's NHL.

But Mike Kelly of the NHL Network and the analytics website thepointhockey.com tweeted after Nylander buried the winner against Dallas on Wednesday that he leads the league with 19 goals from the "inner slot" this season.

Keefe said the perception Nylander, who he also coached with the AHL Marlies, prefers to play on the outside largely comes from when he's in possession.

"It's hard when you have on your stick to find your way to the inside because the other team's not gonna let you," Keefe said. "Where he's having a lot of success now is when others have the puck. He's putting himself in good spots so that when it does arrive to the net he's there.

"He's figured that part out."

Leafs forward Alexander Kerfoot — currently on a line with Nylander and John Tavares — said the eighth pick in the 2014 draft's reputation even found its way to Colorado before he was traded to the Leafs in July.

"I thought he was a little bit more of a perimeter-oriented player," Kerfoot said. "But playing with him you realize he can do everything. He hangs onto the puck really well down low, he can shoot and he can score from all different areas."

Nylander, who wanted to focus on consistency this season, leads the team with a 5-on-5 shot differential of 55.1 per cent, is second behind Matthews in even-strength goals (27 to 18) and is third in points.

Kerfoot said what's impressed him the most is how his linemates uses a six-foot, 196-pound frame.

"He's got a really strong lower body and he's able to fend off defenders and use his edges," Kerfoot said. "That, combined with his quickness to get out of spaces, he's able to hold off defenders for a second and then gain separation really quickly, which gives him a lot of space."