The defining moment of Jared Spurgeon's hockey career came when he was just 13: His peewee coach in Edmonton moved him from forward to defenceman. 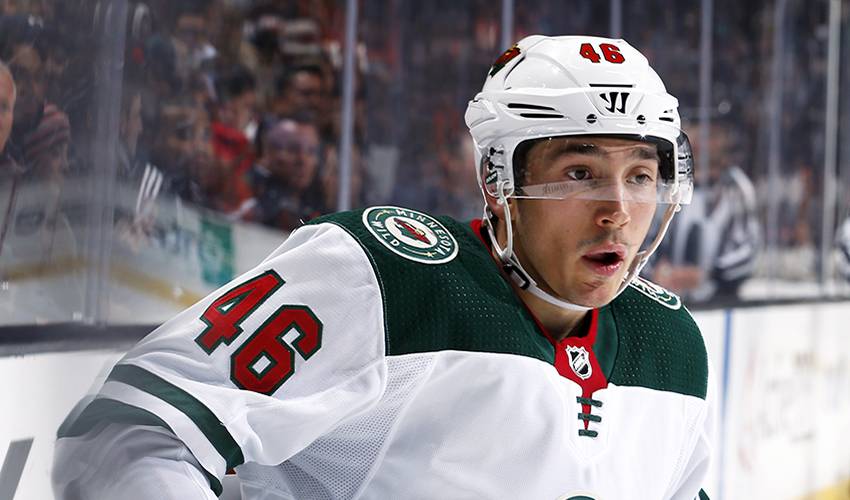 ST. PAUL, Minn. — The defining moment of Jared Spurgeon's hockey career came when he was just 13: His peewee coach in Edmonton moved him from forward to .

There was no going back for Spurgeon, even though he hasn't grown much bigger since then. Minnesota's 5-foot-9, 167-pound stalwart on the blue line has been defying size stereotypes ever since.

“I just fell in love with the position,” Spurgeon said.

Not bad for a sixth-round pick the New York Islanders ultimately declined to sign, paving the way for a tryout with the Wild two years after he was drafted.

“Probably the best in the NHL at breaking the puck out. Unbelievable on his edges. One of the smartest players in the game,” said Buffalo Marco Scandella, who played with Spurgeon in Minnesota for seven seasons. “He's got a lot of things in his toolbox, and he doesn't even need the size.”

Spurgeon, who is halfway through an expected two-week absence for a hand injury sustained while blocking a shot, has ranked over the last four years in the top 20 among NHL in goals, power play goals, blocked shots and time on ice.

“That's one of those players that you're just like, 'How?' ” Scandella said. “You just have to watch him over a season. Play with him, and you understand how good he is.”

The ability to skate — and pass — quickly will always be critical for a player with Spurgeon's frame. Part of that is being fast enough to elude opponents, but it also means maximizing his power by maintaining leverage and balance for the moments when he does initiate or absorb contact.

“You don't need to be huge and massive to be strong on your skates,” said St. Louis Ryan O'Reilly, who faces Spurgeon frequently as a Central Division rival. “You go in and forecheck, and he is so strong. It's like going against a big guy.”

Awareness is just as important as fearlessness to succeed as a 5-foot-9 player, of course.

Spurgeon simply doesn't get pushed around much because he's rarely caught off guard by a big hit. The advantage of vision from the blue line, being able to see the plays develop in front of him, was one of the benefits that immediately drew Spurgeon to . He tried to emulate players who came before him like Brian Rafalski and Dan Boyle, sub-6-foot who were offensive threats but never a liability in their own zone.

“The emphasis of moving the puck and getting up ice and being able to contribute offensively as well is a whole lot different than it used to be, where maybe you had one of those guys before and a bunch of a big, mean guys,” Spurgeon said. "But I think now the game is so fast that I think it gives the ability for smaller guys to play.”

According to Sportradar data, there are 41 who have appeared in at least one NHL game this season and are listed at 5-foot-11 or shorter. That number drops to 18 at 5-foot-10 or less and to six at 5-foot-9 and under.

The Wild have two 5-foot-9 blue-liners with Spurgeon and Brad Hunt. Boston's Torey Krug is another standout in the club. Those lanky veterans around the league like St. Louis' Colton Parayko (6-foot-6), Carolina's Dougie Hamilton (6-foot-6) and Boston's Zdeno Chara (6-foot-9) have obvious advantages with reach and strength, but there's plenty more to sound than being able to poke a stick at a puck.

“We have the quickness and the first two or three strides in order to close plays so that they don't get the possession of the puck and move on. I think it's just using our skating abilities,” Krug said. “I think it's been a long time coming, especially with the real changes in the way the game is trending. It's funny, years ago to have one of those guys on your team, people kind of scoffed at that. Now we've got two and sometimes three in the lineup at once, and it creates really mobile back end.”

Pittsburgh goalie Tristan Jarry had a franchise-record scoreless run of 177:15 that ended during a 4-1 loss to Montreal on Tuesday, just the second defeat in eight starts for the backup to Matt Murray. Jarry stopped 82 consecutive shots during the streak, the longest in the league this season.

The Detroit Red Wings are sliding toward a four-year absence from the playoffs after the end of their famous 25-season streak of making it. The Red Wings are on a 12-game winless streak, going 0-10-2 since Nov. 12, and have the worst record in the NHL at 7-22-3. They've dropped 10 straight games in regulation by a 47-16 margin.

Boston at Washington on Wednesday.

The two top teams in the league face off in downtown D.C. Both squads are 7-2-1 over their last 10 games, with the Bruins leading the Atlantic Division with 46 points and the Capitals on top of the Metropolitan Division with 49 points. The Capitals beat the Bruins 3-2 in a shootout in Boston on Nov. 16 after T.J. Oshie scored the tying goal in regulation with 59 seconds remaining.