Florida won its off-season. Now it is all about the post-season. 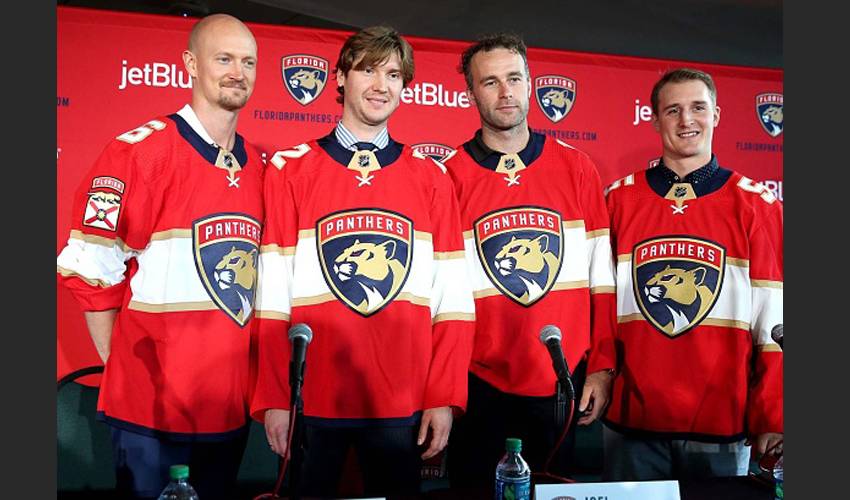 The Panthers' transformation is essentially complete after free agency netted them four players Monday. The biggest move was the signing of two-time Vezina Trophy winner Sergei Bobrovsky, who signed a seven-year, $70 million deal and will replace the now-retired Roberto Luongo as Florida's top goaltender.

"All we're trying to do is make our team better for the long haul," Tallon said. "And whatever that plan was, we stuck with it and we were very successful at getting it done, I think."

The Panthers were aiming at landing perhaps the two biggest free agents on this year's market by talking last week with both Bobrovsky and Artemi Panarin. When it became evident that Panarin wasn't picking Florida — he ultimately chose the New York Rangers — Tallon and the Panthers pivoted in other directions.

All four of the new signees will be in South Florida for their formal introductions Tuesday, joined by new coach Joel Quenneville. The Panthers' started with the hiring of Quenneville — a three-time Stanley Cup-winning coach who Tallon considers the best in the game. The Panthers now have a top-tier goalie to help the plans for a turnaround.

"It's been great so far," Tallon said of the . "We've got work to do and we've got to keep improving every day and that's what we're all about."

A clear sign of how much better Florida thinks it can be immediately with Bobrovsky between the pipes: He led the NHL with nine shutouts last season. That's one more shutout than the Panthers have had, total, in the last two seasons combined. And if nothing else, Florida won't have to face him anymore — Bobrovsky is 13-1-2 all-time against the Panthers.

"He's a two-time Vezina Trophy winner and he gives you a chance to win every night," Tallon said. "He's durable. He's a student of the game. Nobody works harder."

So now it's up to Quenneville and Bobrovsky to lead the way in Florida's annual quest to shake out of its long playoff slump. The Panthers haven't won a series since 1996, but believe they are finally in position — with an offensive core led by Aleksander Barkov, Vincent Trocheck and Jonathan Huberdeau — to become contenders for years to come.

"We have plenty of scoring ability, we have plenty of ," Tallon said. "We had to address physicality and goals-against. Those were the biggest concerns we had and I think we did a good job addressing those needs."

Sergei Bobrovsky posted his career-high ninth shutout along four straight wins, helping his club to a perfect week and a into playoff position.