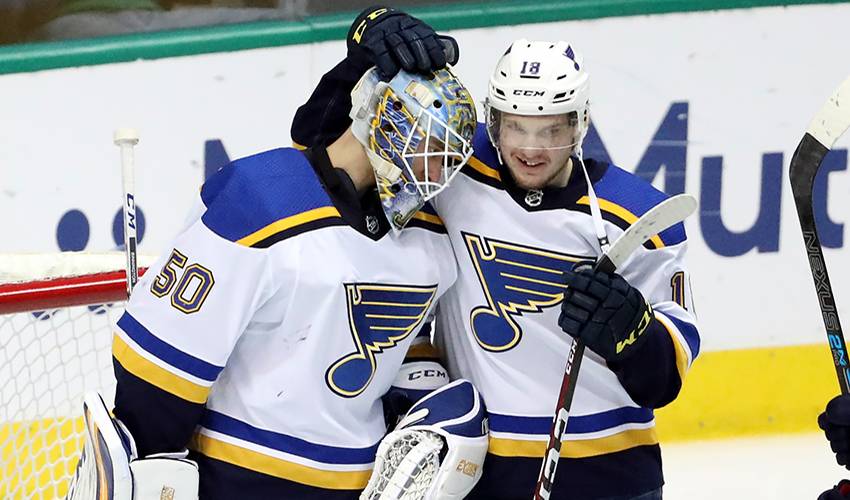 Sure, the standout rookie goalie for the St. Louis Blues admitted he got a little tired late in the double-overtime win over Dallas in Game 7. But he said he is ready to keep his strong play going as St. Louis advanced the Western Conference final for the first time since 2016.

"I was pretty happy to see that puck go in, and in front of a home crowd, the atmosphere was crazy," Binnington said. "It was a fun experience."

The Blues will play the winner of Wednesday night's Game 7 between the Colorado Avalanche and the San Jose Sharks.

Either way, it is just the fourth conference finals appearance for St. Louis since 1970. They can thank Binnington for doing his part.

The 25-year-old Canadian was cool and composed — and maybe a bit weary — following Pat Maroon's winner at 5:50 of the second overtime Tuesday night. There was no overly demonstrative celebration. He calmly skated to his teammates as is if the Blues had wrapped up a ho-hum, regular-season game in October.

It's been this way since Binnington was called up from the AHL on Jan. 5.

In the first round, Winnipeg fans tried to throw Binnington off his game by chanting, "You look nervous." After helping lead the Blues to a momentum-shifting win in Game 5 at Winnipeg, reporters asked him about the chant to which he simply replied, "Did I look nervous?"

"Big time, big time saves, at key moments," Blues coach Craig Berube said of Binnington. "That's a credit to him. When you're sitting there and watching it all, we're getting a lot of action at the other end, things happen and they come down and get an opportunity, he was there to make a big save for us."

St. Louis was last in the league in points in January. Behind Binnington, the team went on a franchise-record, 11-game winning streak from January into February.

Binnington wound up 24-5-1 in the regular season and is 8-5 in the , where his save percentage is a pedestrian .915 but his goals-against average is just 2.39 behind a stingy .

He hasn't lost more than two games in a row all season.

"There were a couple moments where you just took a second and realized where you were," Binnington said. "It's pretty special. I'm happy to be part of it and I'm happy we got the win in front of the home crowd here."

The Blues run is historic. They are one of only seven teams to make the after being last in the league in points on Jan. 3. They are the only team to win a playoff series after climbing out of that hole.

Now they are halfway to the first Stanley Cup in the franchise's 52-year history.

"A lot of people doubted us, but I'll tell you what, and I really do mean this, I'm really proud of this group more and more every single day," Blues captain Alex Pietrangelo said. "You're around this group of guys and a lot of people say we have a close room, and we do because that's a resilient effort from where we were in December to get to where we are now. Sometimes you've just got to look back and be proud of the effort. It's been a long road, but we just keep on pushing and it's taken everybody right now, but we're finding a way."

That resiliency was tested in Game 7.

Bishop, who grew up in St. Louis and was originally drafted by the Blues, threatened to steal the game and the series for Dallas. He made 52 saves, thwarting chance after chance.

Binnington was not tested nearly as much, but he stepped up in overtime, including a sprawling save on a wrap-around attempt that was dangerously close the goal line.

"They had a couple chances in overtime and I just tried to do my job and try to make the saves and give the team a chance to win," Binnington said. "Everyone else took care of their job and got the win, so it was good."