The Sharks rallied behind their captain after a plea from Thornton, including a tiebreaker from Kevin Labanc, who assisted on the first three goals of the comeback win. 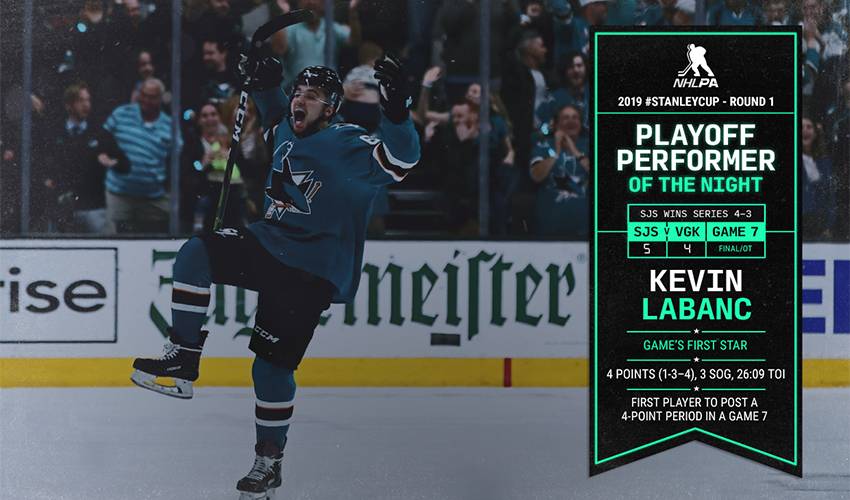 SAN JOSE, Calif. — In San Jose, the game will always be remembered as the Pavelski Payback for the four goals scored on one power play after the Sharks' captain was knocked out cold, turning around a wild Game 7 that finally ended in overtime.

In Las Vegas, the Golden Knights will always lament the call that they believe was excessive and cost them a chance to advance to the second round.

The Sharks responded to the bloody injury to captain Joe Pavelski by scoring four goals on the ensuing power play and then bounced back after allowing the game-tying goal in the final minute of regulation to beat Vegas 5-4 on Barclay Goodrow's goal 18:19 into overtime on Tuesday night.

"He's the heart of this team, and to see him go down like that and suffer like that was heartbreaking for us," said Joe Thornton, who rallied his teammates and implored them to score three goals on the power play to erase the 3-0 deficit. "That power-play unit, it won us the game. The boys got together and said this is for Pavs. We love him. It was just a matter of will, and we willed that one for him."

The penalty happened on a faceoff in San Jose's offensive zone when Cody Eakin cross-checked Pavelski in the chest with 10:47 to play. Paul Stastny then bumped Pavelski as he fell to the ice, his helmet slamming down. Pavelski was knocked out and bleeding on the ice.

"You see our leader go down, he's out cold on the ice and it was kind of like he was seizuring up a little bit so tough to see," teammate Logan Couture said.

The officials huddled as a dazed Pavelski was helped to the locker room and gave Eakin a five-minute major for cross-checking and a game misconduct. Series supervisor Don VanMassenhoven said the major penalty was given because the cross-check caused a significant injury.

"They called five minutes for that? Why don't you have hockey replay or something? It changed the whole outcome of the game," forward Jonathan Marchessault said. "Seriously. What is that? It's so disappointing. . The game is not even close, it's 3-0. Call the two, OK, but a five? With something you don't even see? You just called the outcome. It's a joke, that's what it is. It's embarrassing."

The Sharks then rallied behind their captain after a plea from Thornton thanks to two goals from Couture, one from Tomas Hertl and then the tiebreaker from Kevin Labanc, who assisted on the first three goals. That scoring spree in 4:01 against Marc-Andre Fleury sent the fans at the Shark Tank so used to playoff disappointment into delirium. It marked just the second time a team had scored four goals on one major power play in a playoff game.

"You have to give credit to Jumbo," Couture said. "He gathered the guys at the bench and said you guys go out and get ... three goals right now. When a guy who has played 20 years orders you around like that, bosses you around, you have to do it. We got four."

Martin Jones then appeared ready to seal the win, robbing Mark Stone with a glove save with 3:10 to go and Vegas on the power play. But the Golden Knights didn't go away and got the equalizer with Fleury pulled in the final minute.

William Karlsson, who scored the first goal, leaped at the blue line to keep a puck in the zone and then Reilly Smith ended up with it behind the net where he set up Marchessault to make it 4-4 and set up overtime. It was the third-latest tying goal in a Game 7 in NHL history but it wasn't enough for Vegas.

"Last year we were in the Stanley Cup finals and it was tough to lose, tonight was tougher than that," coach Gerard Gallant said. "It really was, the way we lost that hockey game."

Fourth-liner Goodrow, on his second shift in the overtime, delivered late in the extra period. He took a pass from Erik Karlsson and deking his way past Fleury for the game-winner that set off a wild celebration. The Sharks became just the second team ever to overcome a three-goal deficit in the third period of a Game 7 and win, joining the Boston Bruins, who did it in 2013 against Toronto.

"To be honest I can't really remember what just happened," Goodrow said. "It was a pretty surreal moment. Definitely the biggest goal of my career, obviously."

Eakin and Max Pacioretty also scored for Vegas and Fleury made 43 saves.

Jones, who was pulled for ineffectiveness in two of the first five games, made 34 saves to close out the series and give the Sharks their first comeback from 3-1 down in a series in seven tries.

San Jose will face Colorado in the Western Conference semifinals, starting with Game 1 at home on Friday night.

NOTES: St. Louis also had four goals on one power play vs. Los Angeles on April 27, 1998. ... Sharks F Joonas Donskoi was replaced in the lineup by Lukas Radil after taking a hard hit in Game 6. ... Vegas F Brandon Pirri played in place of Pierre-Edouard Bellemare.