Martin Jones may have saved his best performance for Game 6, coming up with big saves to keep the Sharks in the game with huge saves while under rapid fire. 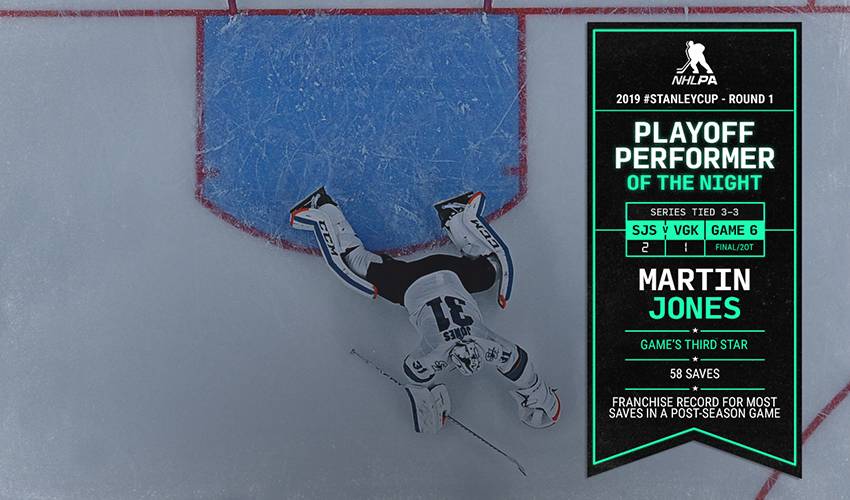 LAS VEGAS — After winning Game 5 at home to avoid elimination, Tomas Hertl vowed the San Jose Sharks would return to SAP Center for a seventh and decisive game in their opening round series with the Vegas Golden Knights.

One day later, he clarified it wasn't necessarily a guarantee, but rather a vote of confidence his team would force a Game 7.

Either way, he came through Sunday to make it happen.

Hertl scored a short-handed goal 11:17 into the second overtime to lift San Jose to a 2-1 win over the Golden Knights, forcing a deciding game in their first-round playoff series.

"At first moment when I get it, I was already a little bit tired, I was thinking maybe just dump it in and change, but I saw a little bit of space, so I just take a couple of steps and try shoot it," Hertl said. "If you don't try you never know, so I tried it and it somehow get through, and for sure huge goal."

Just 31 seconds after Barclay Goodrow was called for slashing Brayden McNabb, it was Marc-Edouard poking the puck from in front of Jones with a stretch pass down the of the ice, where a weary Hertl was there to gather the delivery, skate past Vegas' Shea Theodore and beat Marc-Andre Fleury with a wrist shot to seal the win and force Game 7 on Tuesday at San Jose.

"The only reason it went in because Shea Theodore slashed a stick and you tell your to play the guy's stick," Vegas coach Gerard Gallant said. "So, it's do or die in the next game for both teams."

Hertl became the first player in NHL history to score a short-handed winner in a game that required multiple overtimes. Only eight other players in league history have scored a short-handed goal in the first overtime of a game.

Logan Couture also scored to get the Sharks on the board just before the end of the first period, when he quickly gathered the puck, around Golden Knights defender Nate Schmidt and fired past Fleury to give San Jose a 1-0 with 6.5 seconds left.

"Obviously, it's a tough one," said Jonathan Marchessault, who scored Vegas' lone goal. "I felt like we were the better team, but sometimes these games can feel a little tricky. We definitely kept buzzing and kept going. ... Obviously disappointed, I think tonight we should have won, but who cares. Got to go Game 7 and get it done over there."

That won't be easy against a suddenly hot Jones, who had a playoff career-high 58 saves in Game 6 and has helped San Jose win two straight to even the series after being forced to the brink of elimination. Jones has stopped 88 of 91 shots in the last two games.

"It was a good game obviously, we stuck with it the whole night," Jones said. "I give our guys a lot of credit, they had some huge penalty kills in overtime and the third. Everybody chipped in with stuff today."

Jones may have saved his best performance for Game 6, coming up with big saves to keep the Sharks in the game with huge saves while under rapid fire.

With Vegas carrying momentum over from Marchessault's goal that tied the score with 8:40 left in the second period, and a penalty kill that carried into the third, Jones' biggest save came against Reilly Smith, whose point-blank one-timer was stymied. Moments later Jones snuffed out Mark Stone's slap shot from the circle.

Both goalies came up with monster saves during the first extra period, first with Fleury - who had 27 saves - stopping Kevin Labanc just after the puck drop, and later when Jones stopped Max Pacioretty's one-timer with 9:57 left.

"To their credit, they want to close this out tonight at home and they pushed hard and Jonesy made some big saves," San Jose coach Peter DeBoer said. "I thought we defended well, even though we were on our heels a little bit. I thought it was a gutsy effort on the road in a tough situation by our group and we're still alive."

Asked if he had an assurance for Tuesday, Hertl laughed and simply guaranteed the Sharks would show up and play their best game.

"Game 7 is the most fun game you can play in the NHL," Hertl said.

NOTES: The game marked Vegas' second only Game 6 in its young history, as its only other appearance in a Game 6 was a 3-0 victory in San Jose during the Western Conference semifinals of the 2018 Stanley Cup Playoffs. ... The teams received a rare two-day break between Games 5 and 6 because the Jordan Brand Classic high school all-star basketball game was already booked for Saturday at T-Mobile Arena. ... Fleury has won the last two Game 7s he has started: the Stanley Cup Final against Detroit in 2009, and at Washington in 2017. The 15-year allowed one goal in those two games.