November 14, 2022
By:
Chris Lomon
Other News
Hockey Hall of Fame

Roberto Luongo, Henrik and Daniel Sedin, Daniel Alfredsson, Riikka Sallinen and Herb Carnegie will be the latest stars to be enshrined. 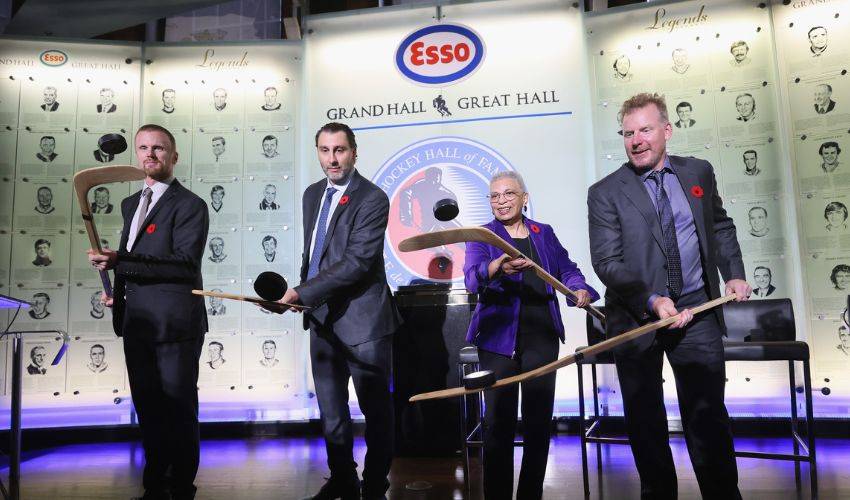 The Hockey Hall of Fame will welcome six players into its hallowed halls on November 14 as part of the Induction Class of 2022.

Roberto Luongo, Henrik Sedin, Daniel Sedin, Daniel Alfredsson, Riikka Sallinen and Herb Carnegie will be feted as the latest stars to be enshrined in the Hall.

It will be a special occasion for fans of the Vancouver Canucks who will see three legends - Luongo, and the Sedin twins - take their place alongside some of the greatest to have ever played the game.

Originally selected fourth overall by the New York Islanders in 1997, Luongo was dealt to the Florida Panthers after his rookie year. The Quebec native had five memorable seasons in the Sunshine State before he was traded to the Vancouver Canucks. Luongo quickly became a fan favourite, both on and off the ice. In 2008-09, Luongo recorded nine shutouts. Two seasons later, his goals against average was a paltry 2.11.

Just ahead of the 2014 NHL trade deadline, Luongo was dealt back to the Panthers, where he would spend the final five full seasons of his career. The goaltender, who holds the record for the most franchise wins with both Florida (230) and Vancouver (252), had 11 campaigns with Florida, eight with Vancouver, and one with the New York Islanders. The six-time NHL All-Star and 2010-11 William Jennings Trophy winner recorded 489 career victories in 1,044 games, 77 shutouts, a .919 save percentage and a 2.52 goals against average.

Touted as one of the game’s best passers, Daniel Sedin was selected second overall in the 1999 NHL Draft, one spot higher than his twin brother Henrik. Over his decorated career, Daniel was a three-time NHL All-Star, and an Art Ross Trophy winner (2011). In 2011, he was given hockey’s highest individual honour when his peers selected him as the recipient of the Lester B. Pearson Award (now known as the Ted Lindsay Award) as the league MVP as voted by the players. In 2017-18, Daniel won the King Clancy Memorial Trophy for his off-ice contributions.

Like his twin brother, and drafted third overall in the 1999 NHL Draft directly after Daniel, Henrik Sedin earned a rightful reputation as one of hockey’s all-time best passers. His on-ice vision, combined with an ability to thread the puck onto a teammate’s stick in any situation made him a revered teammate and a respected rival. Among his many accolades and accomplishments, the centre won the 2009-10 Art Ross Trophy, the 2009-10 Hart Trophy (league MVP) and was a two-time King Clancy Memorial Trophy recipient and three-time NHL All-Star.

He totaled 830 assists and topped the charts in that category for three straight seasons from 2009 to 2012. In an outstanding 2009-10 season, Henrik led the NHL in total points (112). One year later, he tallied 19 playoff assists and helped lead the Canucks to the Stanley Cup Final. Henrik finished his NHL career with 240 goals, and 1,070 points.

Henrik won gold for Sweden alongside his twin brother at the 2006 Olympic Games.

One of the best late-round draft selections in the history of the league, Alfredsson, a sixth-round pick (133rd overall) took the NHL by storm in his first season with the Ottawa Senators. In 1995, after a rookie campaign that yielded 26 goals and 61 points, he was named the Calder Memorial Trophy winner as the top first-year player.

Alfredsson skated 17 of his 18 NHL seasons with the Ottawa Senators before he signed a one-year deal with the Detroit Red Wings in the summer of 2013. Alfredsson, who served as the Senators captain from 1999-2013, holds the Senators’ franchise records for goals (426), assists (682), and points (1,108). During Ottawa’s run to the Stanley Cup Final in 2007, Alfredsson led all players with 14 goals in 20 games. His impressive hardware haul also includes the 2012 King Clancy Memorial Trophy and the 2013 Mark Messier Leadership Award. In all, he netted 444 goals, along with 713 assists for 1,157 points.

In 2006, Alfredsson won Olympic gold alongside fellow inductees, Daniel and Henrik Sedin, representing Sweden at the 2006 Olympic Winter Games. He sits second in all-time points recorded by a Swedish player in the NHL.

One of the most decorated players to have competed on the international hockey stage, Sallinen continues to have an impact on the Finnish women’s hockey program.

The right-handed shooting forward enjoyed a phenomenal career on the world scene, from the 1989 European Championships to the 2019 World Championships. She helped Finland win two bronze medals in her four Olympic appearances. Sallinen’s bronze at the 2018 Olympics in PyeongChang made her the oldest player to ever win an Olympic medal in ice hockey, moving ahead of fellow Finnish superstar and Hockey Hall of Fame inductee, Teemu Selanne, who had set the standard at the 2014 Olympic Winter Games after earning bronze in the men’s ice hockey tournament at the age of 43.

Aside from her international play, Sallinen played 11 seasons with the Naiusten SM-sarja of the Finnish elite league and was a five-time champion.

Born in Toronto, Ontario on November 8, 1919, Carnegie was the son of Jamaican immigrants. Denied the chance to play in the NHL because of the colour of his skin, the man known as ‘Swivel Hips’ Carnegie went on to an outstanding career playing in the Senior ranks. Though Carnagie played with his brother Ossie in 1940-41, it was in the 1941-42 season that the famous ‘Black Line’ or ‘Black Aces’ first played together in the Quebec Senior Hockey League. The first all-Black line in semi-pro hockey was comprised of Herb and Ossie Carnegie along with Manny McIntyre.

Despite numerous challenges and disappointments, Carnegie found a way to make significant contributions to the game, past and present, both on and off the ice. Following his retirement in 1953-54, he founded Future Aces, one of Canada’s first hockey schools, in 1955. He was inducted into Canada’s Sports Hall of Fame in 2001 and the Ontario Sports Hall of Fame in 2014 and is a member of 14 Hall of Fames. He was also named to the Order of Ontario and the Order of Canada. A public school in Toronto was named in his honour and the North York Centennial Centre was renamed the Herbert H. Carnegie Centennial Centre. Carnegie died on March 9, 2012, at the age of 92.