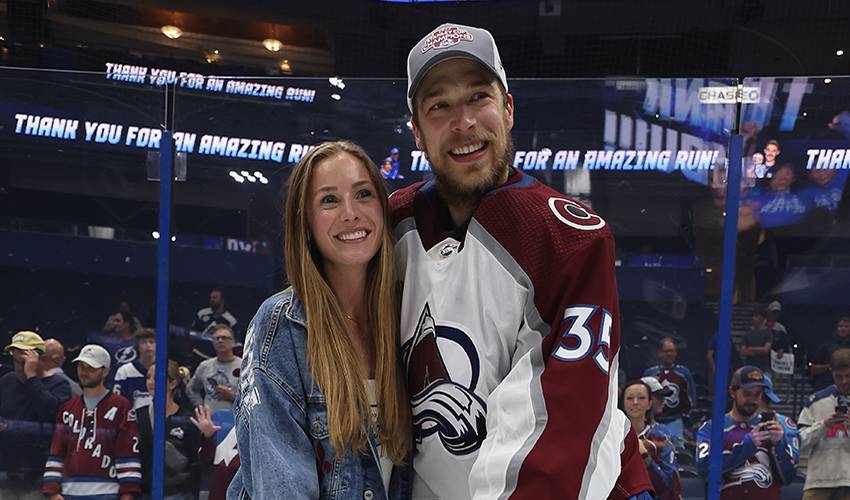 One day removed from the biggest highlight of his NHL career and the 32-year-old netminder from Saskatchewan still found himself somewhat at a loss for words in the aftermath of the Avalanche’s championship moment.

“When I woke up the morning after we won, it was still surreal,” Kuemper told NHLPA.com. “But at the same time, it was such an amazing feeling of accomplishment.”

A former sixth-round pick of the Minnesota Wild in 2009, Kuemper had started a grand total of 14 NHL playoff games prior to the 2021-22 postseason.

He was looking to bypass that number this time.

But things didn’t exactly get off to an ideal start for Kuemper in this year’s playoffs. The veteran netminder was forced to leave Game 3 of Colorado’s opening-round series against the Nashville Predators after he was accidentally struck in the eye by a stick, leaving him unable to play the final game of the series.

Kuemper also missed time with an upper-body injury in the Western Conference Final against the Edmonton Oilers, but made his return in Game One of the Stanley Cup Final.

Despite the frustration of two trips to the sidelines, the 6-foot-5, 215-pounder rebounded and posted a 10-4 record, along with one shutout, in 16 playoff appearances.

In Game Four, a 3-2 Colorado win, he became the first goaltender to assist on an overtime winner in Stanley Cup Final history. He was the fourth at the position to record a helper on any playoff overtime goal, following Pekka Rinne (Game Six of the 2016 Second Round), Tuukka Rask (Game Four of the 2010 First Round) and Dominik Hasek (Game Three of the 2002 Western Conference Final).

The outstanding performance came after a rough outing in Game Three.

“I know the guys have my back. I just wanted to go out and play like I can, and we were able to get the win.”

As for his OT helper, Kuemper saw an opportunity and took full advantage of it.

“We had been in their zone for quite some time, and everyone looked exhausted on their end of it, so I just tried to get it [the puck] up as quick as I could, and hopefully we could get something off the rush. Lehky [Artturi Lehkonen] got the puck to Naz [Nazem Kadri] and obviously he made the great play to end the game there.”

Kuemper stood tall in the Stanley Cup-clinching game, a 2-1 triumph, turning aside 22 of 23 shots, for a sparkling .957 save percentage.

“The most rewarding part of the journey was having my wife and family there at the end to celebrate with. That is something I will never forget. It was just an amazing moment to be able to share with them.”

Dealt to the Avalanche by Arizona last July, Kuemper posted a career-best 37 wins, along with five shutouts, a .921 save percentage and 2.54 goals-against average in the 2021-22 regular season.

Thirteen years after being drafted by the Wild, where he played five seasons, followed by a four-year stint with the Arizona Coyotes with 19 games for the Los Angeles Kings in between, Kuemper has reached the summit of NHL success.

For the former Western Hockey League standout, who won both the Four Broncos Trophy as WHL most valuable player and the Del Wilson Trophy as the league's top goalie with the Red Deer Rebels in 2010-11, the path (good times or bad) to Cup glory has helped shape him into the goaltender he’s become.

What’s his message for hockey fans in his hometown?

“To everyone back in Saskatoon, I can’t wait to bring the Cup back to the city and celebrate with all of you.”