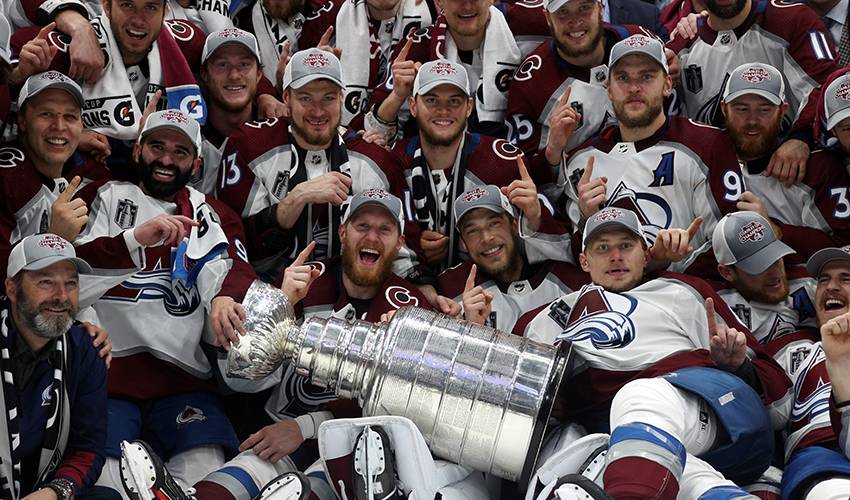 The Colorado Avalanche are the 2022 Stanley Cup champions after defeating the Tampa Bay Lightning 2-1 in Game 6 on Sunday night at Amalie Arena.

Nathan MacKinnon picked up a goal and an assist on Artturi Lehkonen’s game-winner, finishing as the game’s first star in the Cup-clinching victory.

"Nothing but amazing,” MacKinnon described the feeling of his first Stanley Cup. “I have no complaints. Some tough years mixed in there, but it's all worth it now. We never stopped believing. The core guys that have been around, 10 years now, coming in at 18 like Gabe, and [Erik Johnson], to now, it's been amazing. It's so amazing to see guys like [Andrew Cogliano], Jack Johnson, all the veterans, [Josh] Manson, guys that haven't won it yet. It's so amazing."

After 10 years of captaining the Avalanche, Gabriel Landeskog was able to hoist the first Stanley Cup of his career. Landeskog promptly acknowledged the longest-tenured player on his team, Erik Johnson, before hockey’s greatest team prize made its way along to other seasoned veterans like Andrew Cogliano and Jack Johnson.

"Twenty-plus years of just dreaming, wanting and working for it," Avalanche captain Landeskog said postgame. "Just finally coming to fruition after a lot of crazy years and a lot of hard work. This group is just amazing, and all the way from the top to our massage therapists to our wives to the fans to everybody working in Ball Arena. It's incredible.

Steven Stamkos opened the scoring in Game 6, an even-strength tally at 3:48 of the first period. MacKinnon tied the game just 1:54 into the second period, posting his 13th goal of the playoffs, with assists from Landeskog and Bowen Byram. At 12:28 of the second, Lehkonen put the Avalanche in front heading into the third period. There would be no scoring in the third period as Colorado, who outshot Tampa Bay 30-23 (including 9-4 in the final frame) celebrated their Stanley Cup victory.

Cale Makar, fresh off his first-career James Norris Memorial Trophy, was named the Conn Smythe Trophy winner. The 23-year-old notched eight goals and 29 points in 20 games en route to his playoff MVP honours. He joins Bobby Orr and Nicklas Lidstrom as the only defencemen to win the Norris and Conn Smythe in the same season.

Making their first Stanley Cup Final appearance in 21 years, Colorado took Game 1 of the series 4-3 in overtime, following it up with an authoritative 7-0 victory in Game 2 on June 18 Cale Makar and Valeri Nichushkin each scored twice, while Mikko Rantanen contributed three assists.

With the series switching to the Sunshine State for the next two contests, Tampa Bay, powered by four second period goals, notched a 6-2 win in Game 3.

It was a see-saw affair in Game 4, as Tampa Bay’s Anthony Cirelli opened the scoring just 36 seconds into the game. Colorado, courtesy of a Nathan MacKinnon power-play goal knotted the game at 1-1 in the second, but less than five minutes later, Victor Hedman put the Lightning back on top. An early third period tally from Andrew Cogliano sent the game to overtime, with Nazem Kadri, in his return to action from injury, shelving the extra-frame winner for the 3-2 win.

In Game 5, the Lightning struck first when Jan Rutta fired home a slapshot, the only goal of the first period, which saw Colorado hold a 13-11 advantage in shots. Valeri Nichushkin squared the affair for the Avs but Nikita Kucherov put Tampa Bay back on top via a power-play marker. Makar lit the lamp to tie the game 2-2 but Ondrej Palat’s 11th goal of the post-season – scored in the third period –proved to be the game-winner in a 3-2 Lightning win.

This year’s run to the championship was preceded by three straight Western Conference Second Round losses, a first-round exit in 2018 and three (2015-17) consecutive campaigns of missing out on the postseason. The Avalanche established a new franchise record with 56 wins and 119 points in the 2021-22 regular season.

Congratulations to the 2022 Stanley Cup champion Colorado Avalanche, from the staff and members of the National Hockey League Players’ Association.