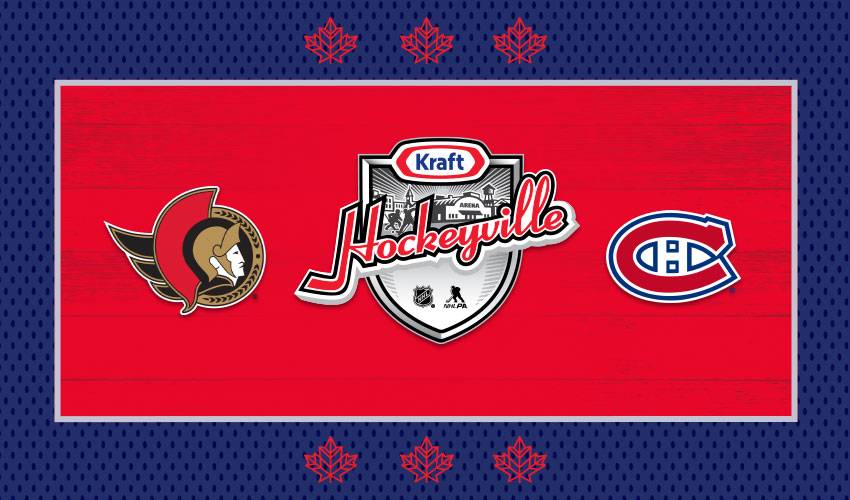 Winning communities Twillingate, Newfoundland and Labrador and Elsipogtog First Nation, New Brunswick will each host a preseason game in October

TORONTO, ON (June 20, 2022) – Kraft Heinz Canada, in partnership with the National Hockey League (NHL) and the National Hockey League Players’ Association (NHLPA), today announced it will host two NHL preseason games between the Montreal Canadiens and Ottawa Senators. The preseason matchups will take place on Thursday, October 6, 2022 at the Steele Community Centre in Gander, Newfoundland and Labrador and on Saturday, October 8, 2022 at the J.K. Irving Centre in Bouctouche, New Brunswick.

The games, which had been postponed due to COVID-19, will be hosted by the 2020 and 2021 Kraft Hockeyville winning communities: Twillingate, Newfoundland and Labrador, and Elsipogtog First Nation, New Brunswick. The details of these games, including broadcast timing, are currently being finalized and will be announced at a later date, along with other important community event details.

“Kraft Hockeyville exists to connect our communities through hockey and help make the game more inclusive and accessible for all,” said Adam Butler, President, Kraft Heinz Canada. “The preseason games that we have announced in partnership with the NHL are such an exciting way to do just that, and we look forward to seeing the passion they ignite in Twillingate and Elsipogtog First Nation.”

In addition to their NHL preseason game, each of the communities also won $250,000 in arena upgrades and $10,000 worth of youth hockey equipment from the NHLPA’s Goals & Dreams fund.

Twillingate is a fishing village where community spirit is second to none, especially when it comes to hockey. The community’s arena, George Hawkins Memorial Arena, was originally an aircraft hangar located in Gander, Newfoundland and Labrador. The structure was disassembled and reassembled in 1967 for Twillingate to give the community the rink and roof that still stands there today. To keep the arena running, it was in need of a number of important repairs. The community rallied together to showcase their pride and passion for hockey from coast-to-coast, cementing their place as the winner of Kraft Hockeyville in 2020.

As Elsipogtog First Nation mourned the tragic loss of Craig Sock and Seth Monahan, two beloved members of their community, they came together in their memory with strength and determination to win Kraft Hockeyville. The community was motivated by their desire to rebuild their community rink after a tragic fire caused significant structural damage, leaving their arena inoperable. The community’s ability to overcome adversity through their love of the game inspired Canadians, who voted them the Kraft Hockeyville winner in 2021.

“It is with great pleasure that all of our staff members and our players will be visiting New Brunswick and Newfoundland this fall as part of Kraft Hockeyville, where the welcome will be warm and enthusiastic just like the fans from these two regions, who are passionate about hockey," said Geoff Molson, Owner, Président and CEO club de hockey Canadien.

"We’re greatly looking forward to participating in this fall's Kraft Hockeyville events in the Maritimes," said Senators president of business operations Anthony LeBlanc. "Hockey fans in Atlantic Canada have long been recognized among the country's most passionate and we know the organization will be warmly welcomed. We’re proud to be able to contribute to the growth of the sport, especially at the grassroots level, throughout the region."