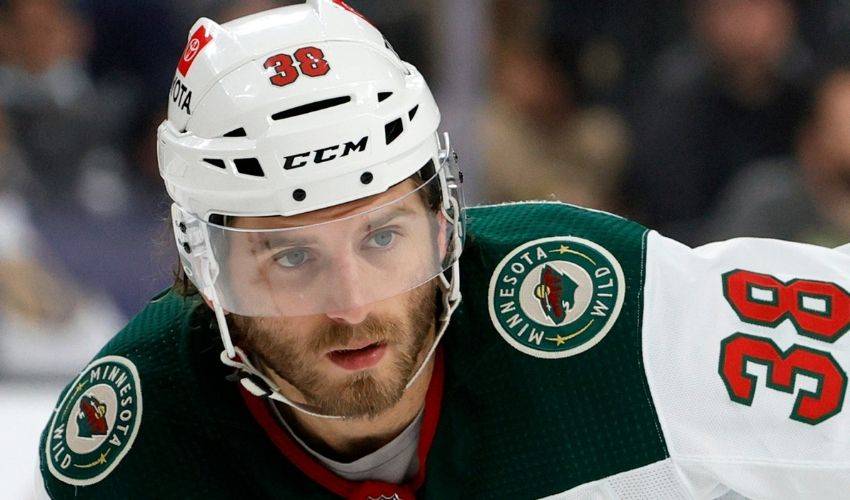 Hartman was a member of the Chicago Blackhawks when the Original Six squad hosted the Blues in the 2017 Winter Classic held at Busch Stadium in St. Louis.

Hartman was also present for another Winter Classic, eight years earlier, when the Illinois native and his family were in the stands to watch Chicago take on Detroit at Wrigley Field, home to the Chicago Cubs.

“There really is something special about outdoor hockey,” said the 27-year-old forward. “The atmosphere is always great and it really takes you back.”

Growing up in West Dundee, about a 50-minute drive northwest of Chicago, Hartman appreciated any opportunity to lace up the skates and brave the elements for an outdoor game with his friends.

“We built a rink in our backyard when I was playing in Ann Arbor,” he recalled, of the time he spent in the Michigan city training in the USA Hockey National Team Development Program. “When we were living in Ann Arbor, my dad built a rink in the back. Besides that, we would use the roller rinks that would freeze over in the winters. We had one close to our house when we were growing up. We’d always take the snowmobiles and ATVs out from our house during the winter and pray for a snow day so we could stay out there all night. We also played on a couple of ponds by my grandma’s house. In Illinois, you definitely get the cold winters for outdoor hockey.”

His latest outdoor adventure, which will take place in Minneapolis at the home of the Minnesota Twins, is an event Hartman and his teammates have had circled on their calendars for a long time.

Hartman, who has recorded 14 goals and 26 points in 30 games amid a career-best start to his season with the Wild, is hoping to come out on the winning side this time around (St. Louis bested Chicago 4-1 in the 2017 Winter Classic).

“The closer it gets to the game, the more everyone has been talking about. Obviously, it’s in the back of your mind how exciting it will be when you find out you get to play in the game, but it really ramps up when it gets close. You need to focus on the next game in front of you, but you start doing interviews about the game and some of the guys have gone over to the field as they’ve been preparing, and there have been promos, things like that, so it’s hard to ignore, for sure.”

The 30th overall pick of the Blackhawks in the 2013 NHL Draft, who signed as a free agent with Minnesota on July 1, 2019, is looking for the Wild to keep the momentum going in the new year after an impressive start to the 2021-22 campaign.

“The fans have been awesome. They’ve really been behind us. I think it was our second or third home game of the year this season. We were playing Winnipeg and they scored to go up two goals. About half the arena emptied, and people were probably back at their cars already, but we ended up coming back and winning in overtime. There are a lot of fans that refuse to leave now regardless of the score. Things have kind of gone like that for us this year and it’s been a lot of fun.”

Despite a first-round exit to the Vegas Golden Knights in last year’s playoffs, the group had plenty of reason for optimism heading into this season, noted Hartman.

“We were one game away from moving on. We were right there. It was Game 7 and anything can happen. But the skill and the team that we have … we’re a really good team and we can beat anyone in this league. I think the whole feeling in the room from the start of camp, the message from up top and everyone in the room created a winning mentality. Personal goals don’t matter, it all should be team oriented and team goals. Everyone is very selfless on this team.”

A trend he expects to continue when the Wild take on the Blues at Target Field.

Although he won’t be sitting in the stands this time, Hartman will have his own cheering section on hand for the game.

“The last one, it was a road game, so this one has a different feel to it. Playing at home, it’s going to be pretty fun. I have a lot of people coming to watch.”

As for the weather, if Hartman has his way, it would look and feel like some of his pre-NHL outdoor experiences.

“We’re hoping for it to be cold, not too cold, and maybe a little snow to make it more fun.”