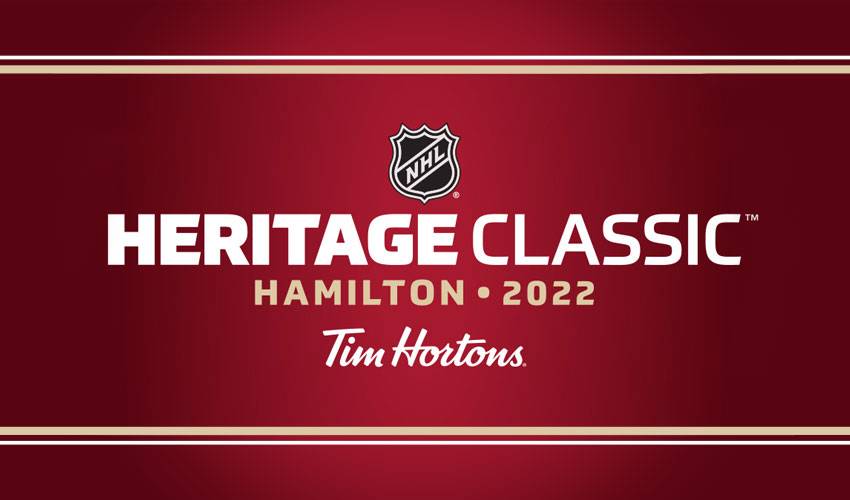 NEW YORK (Sept. 16, 2021) – The 2022 Tim Hortons NHL Heritage Classic™ will feature the Toronto Maple Leafs and Buffalo Sabres on March 13, 2022, at Tim Hortons Field, in Hamilton, Ont., home of the Hamilton Tiger-Cats, the National Hockey League (NHL®) announced today. The game will be broadcast on TNT, Sportsnet, via stream on SN NOW, NHL Live and TVA Sports at 3 p.m. ET.

“We are excited to announce that we will be presenting another Tim Hortons Heritage Classic this season,” NHL Commissioner Gary Bettman said. “When the Toronto Maple Leafs meet the Buffalo Sabres at Tim Hortons Field in Hamilton, we again will honor Canada’s preeminent role in the history of our game while renewing a great and longstanding NHL rivalry. In addition, by inviting the first U.S.-based team to a Heritage Classic, we will celebrate the greater Golden Horseshoe region as the home of so many fans of both the Leafs and Sabres.”

The Tim Hortons NHL Heritage Classic™ returns to the NHL regular-season schedule after games in 2019 in Regina, 2016 in Winnipeg, 2014 in Vancouver, 2011 in Calgary and 2003 in Edmonton. This year’s matchup will mark the sixth Tim Hortons NHL Heritage Classic™, a game with roots dating back to Nov. 22, 2003, when the Edmonton Oilers hosted the Montreal Canadiens in the first NHL regular-season outdoor games. The Maple Leafs-Sabres matchup in March will be the 35th such game, and the third scheduled for the 2021-22 NHL season along with the 2022 Discover NHL Winter Classic® (Jan. 1, St. Louis at Minnesota) and the 2022 Navy Federal Credit Union NHL Stadium Series™ (Feb. 26, Tampa Bay at Nashville).

The Maple Leafs will be playing in their fourth NHL regular-season outdoor game. Toronto defeated the Detroit Red Wings at Michigan Stadium at the 2014 NHL Winter Classic® by a score of 3-2 (SO) in front of a record attendance of 105,491. Toronto also won a rematch versus the Red Wings by a score of 5-4 (OT) at the 2017 NHL Centennial Classic™ at Exhibition Stadium in Toronto attended by 40,148 fans. Toronto’s most recent NHL outdoor contest was at the 2018 NHL Stadium Series™ at Navy-Marine Corps Memorial Stadium, a 5-2 loss to the Washington Capitals in front of 29,516 fans.

The Sabres will be making their third appearance in an NHL regular-season outdoor game. Buffalo hosted the first-ever NHL Winter Classic® against the Pittsburgh Penguins, a 2-1 shootout loss in front of 71,217 fans at Ralph Wilson Stadium on Jan. 1, 2008 and the 2018 NHL Winter Classic®, a 3-2 overtime loss to the New York Rangers in front of 41,821 fans at Citi Field. A complete history of NHL regular season outdoor games can be found here.

“The Toronto Maple Leafs are proud to participate in the 2022 Tim Hortons NHL Heritage Classic™,” said Maple Leafs President and Alternate Governor Brendan Shanahan. “We’re excited at the opportunity to play outdoors again and to bring this great divisional rivalry outside in front of our two devoted fanbases in Hamilton.”.

"It’s an honor to play in the Heritage Classic game. It will be an incredible atmosphere and we are thrilled to be able to play the Maple Leafs in this special event. Many of us fell in love with hockey while playing on the pond or in backyards, so this will give us a chance to get back to our roots while celebrating the game of hockey." Kevyn Adams, General Manager, Buffalo Sabres.

Tim Hortons Field is a multi-purpose stadium in Hamilton, home to the Hamilton Tiger-Cats of the Canadian Football League, the Canadian Football Hall of Fame and Forge FC of the Canadian Premier League. The stadium, primarily used for Canadian football and soccer, has hosted a multitude of high-profile sporting, entertainment and community events since opening its doors in 2014, and will serve as the venue for the 108th Grey Cup in 2021. Tim Hortons Field is within walking distance of the site of the original Tim Hortons restaurant, which opened in April 1964 at the corner of Ottawa Street North and Dunsmure Road.

“Tim Hortons Field provides a best-in-class live viewing experience and has been fortunate to host many successful major events,” said Matt Afinec, President and Chief Operating Officer of the Hamilton Tiger-Cats and Forge FC. “We are excited to partner with the NHL to bring the Tim Hortons NHL Heritage Classic™ to Hamilton and welcome hockey fans from around the region to this spectacular venue.”

“I am thrilled Tim Hortons Field has been selected as the venue for the 2022 Tim Hortons NHL Heritage Classic™. Hamilton is a big sports town, and Hamilton hockey fans are going to be over the moon with excitement to see NHL hockey played outdoors in the Hammer," said Mayor of Hamilton, Fred Eisenberger. “Home to local breweries, a dynamic hospitality industry and a vibrant downtown core with shops and amenities, I look forward to welcoming fans from all over and invite them to explore all that Hamilton has to offer.”

The 2022 Tim Hortons NHL Heritage Classic™ will showcase a number of the top players in the NHL. The Sabres are led by 2018 First-Overall NHL Draft selection Rasmus Dahlin and captain Jack Eichel, as well as, Kyle Okposo, Jeff Skinner and Dylan Cozens. The Maple Leafs counter with 2020 NHL All-Stars Auston Matthews and Mitch Marner, as well as Morgan Rielly, William Nylander and captain John Tavares.

“The 2022 Tim Hortons NHL Heritage Classic™ promises to be a day to remember for players and fans alike,” said Don Fehr, NHLPA Executive Director. “The Maple Leafs and Sabres Players are excited to take their game outdoors, and play in the great city of Hamilton in front of a stadium of passionate fans.”

NHL Network™ and NHL.com will provide extensive coverage live from the event leading up to and after the game. NHL Social™ will have exclusive coverage on all social platforms, including the use of the hashtag NHL #HeritageClassic.