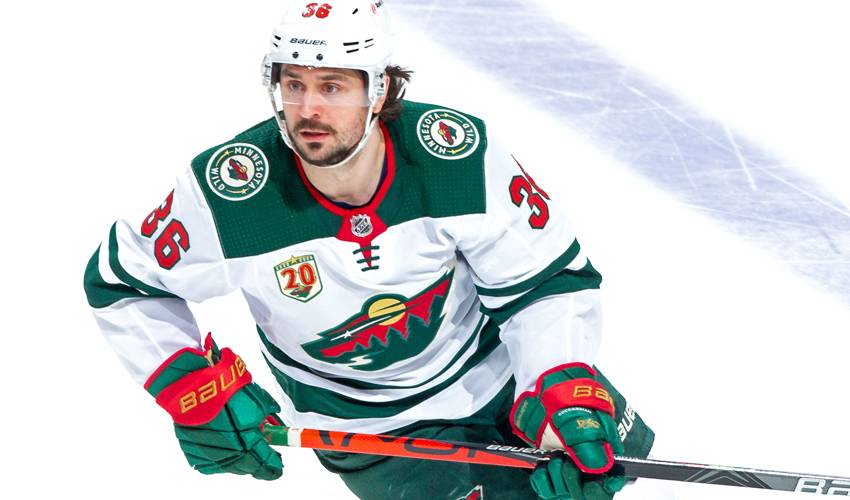 Mats Zuccarello has wasted no time making an impact in his return to the Minnesota Wild lineup, tallying a league-leading six assists and co-leading the league in points with eight over four games this past week, while also recording his 400th NHL career point. He helped punctuate a strong week for the Wild by setting up teammate Matt Dumba’s dramatic OT-winner Saturday with less than one second remaining vs. Los Angeles.

The 33-year-old’s start to the season was delayed due to his recovery from off-season arm surgery. Zuccarello, who returned to action February 16, quickly developed chemistry with teammates Kirill Kaprizov and Victor Rask.

“They’ve got a lot of confidence,” Wild head coach Dean Evason said about the trio.

The Norweigan’s point production is also making up for lost time through his charity initiative “Match Mats” where he donates 1,000 Norwegian Krone for every point he records to help support grassroots sports in Norway. With 11 points in seven games so far, the forward has raised 11,000 Krone, with another 242,000 Krone coming from sponsors.

“It’s for kids in Norway to be able to do sports,” Zuccarello explained. “Sports around the world now, it’s expensive. Not everyone can afford playing sports. I think of what sports did for me and a lot of people – preparing you for life, even if you become an athlete, like ups and downs, playing on teams and being together in sports. It’s sad that not everyone can afford that.”

Zuccarello had a goal and three assists to help the Wild earn their third straight win with a 6-2 victory over the San Jose Sharks at SAP Center Monday night.

With Minnesota trailing 1-0 in the first period, Zuccarello scored his second goal of the season by showing some patience.

It didn’t take long for Zuccarello and his linemates to strike again, with Kaprizov scoring 11 seconds later on a backdoor tap-in off a tic-tac-toe play.

Then in the second period, Zuccarello registered his second assist by setting up Jonas Brodin’s point shot, giving Minnesota a 5-1 lead. Zuccarello recorded his third assist on Rask’s empty-net goal, capping off a strong performance for the trio who have combined for 12 points over the last two games.

"Feels good when the puck finds you," Zuccarello said after the game. "That's a good feeling. And it obviously feels good to help contribute to a win... I feel like the whole team is playing the same way, there's chemistry on all the lines, and three wins in a row, that makes you feel good."

Zuccarello helped the Wild extend their winning streak to four games with a 6-2 victory over the Colorado Avalanche at Ball Arena Wednesday night.

Midway through the first period, Zuccarello opened the game’s scoring as he finished off a nice pass play to beat Avs netminder Philipp Grubauer with a shot from the goal line. Not only was this Zuccarello’s third straight game with a goal, but it was also the 400th point of his career.

Zuccarello added an assist on teammate Ryan Hartman’s goal in the third period to give him three consecutive multi-point games.

It was also a milestone night for Zach Parise, who earned his 800th career point with a goal in the second period.

Zuccarello extended his point streak to five games as the Wild earned their fifth consecutive win with a 3-1 victory over the Los Angeles Kings at Xcel Energy Center Friday night.

Zuccarello helped the Wild get on the board with the secondary assist on Kaprizov’s fifth goal of the season, continuing his strong five-game stretch with three goals and seven assists.

Zuccarello kept his point streak going in helping the Wild earn a 4-3 overtime win  against the Kings on home ice Saturday night.

At the latest juncture possible in the game, Zuccarello helped his club’s overtime heroics by setting up Wild defenceman Matt Dumba’s game-winner. The goal came with 0.3 seconds left in regulation as Zuccarello made a heads-up pass through three Kings players to send Dumba in alone on Kings goalie Cal Petersen.

Zuccarello will look to continue his point streak as the Wild head out on a four-game road trip to take on the Vegas Golden Knights March 1 and 3 before finishing the week with a back-to-back against the Arizona Coyotes March 5 and 6.